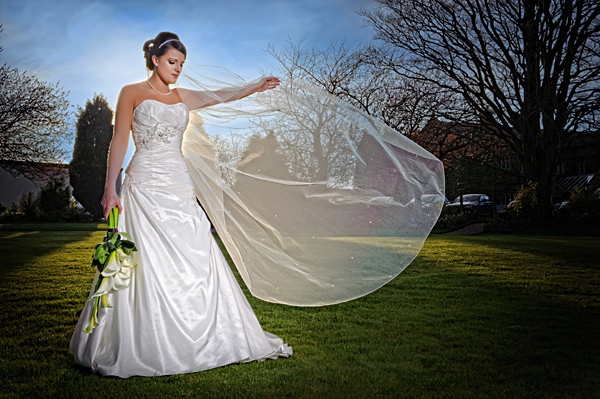 I was lucky enough to be asked to photograph the wedding of a couple who are good friends of mine, Matt and Lucy. OK, so it tends to up the ante a bit, as friends tend to have higher expectations. And lets face it, we want to do the very best we can for our friends and family. Mind you, there was a little more pressure with this wedding, as Matt occasionally second shoot me for weddings. Whilst he knows the routine pretty much inside out, he also knows what I’ll be looking for with regards to the informal portrait session. Hmmmm, no pressure then 🙂

The above image is quite possibly my favourite from the day. Very simple in execution to be honest, and also quite easy to reproduce. Lucy is backlit by the low sun, bearing in mind this was taken on the 20th April at 1800hrs (The exif data will show 1900hrs, because I’m rubbish when it comes to changing the camera time to and from BST, so it just gets left). Because the sun is fairly close to setting, it’s actually quite weak, so it’s easily balanced with flash to bring up the detail on Lucy, and stop her going to silhouette.

I used a Lencarta Safari Classic just to my right, firing through my trusty, if rather battered, 120cm folding Octa. Output needed to be at ½ to balance nicely against the sunlight. The camera was a D3 using 1/125th sec at ISO200 and a 24-70mm at f20

The safari caused the veil to remain white, rather than go dusky grey due to being backlit by the sun. It also picked out the diamonds that were sewn into the veil rather nicely too. 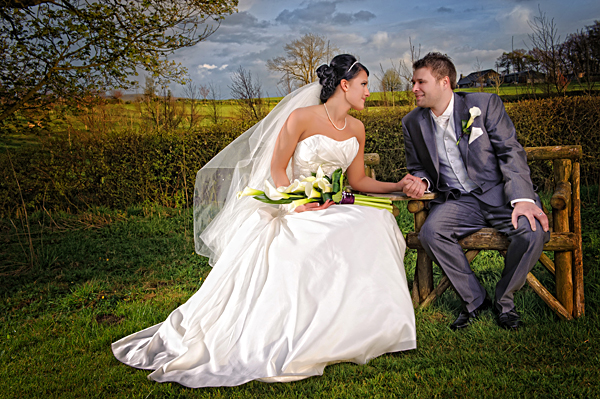 This image was the last from the informal session, and just nicely shows Matt and Lucy relaxing. The main light is still provided by the sun, but there is an accent light coming from frame left, and provided by the Safari at ¼ power, fired against a reflective umbrella to fill the shadowing down Lucy’s right side (frame left), shadowing caused by the sunlight.

As the ambient is dropping further at this point, I ended up using a shutter speed of 1/80th sec and an aperture of f13 and still at ISO200.

The most important thing here, was to ensure the fill light pretty much matched the strength of the setting sun. Too much and it would become distracting and also look a little odd. Too little would would be just as distracting, as dark swathes would have been visible across the back and side of her dress.