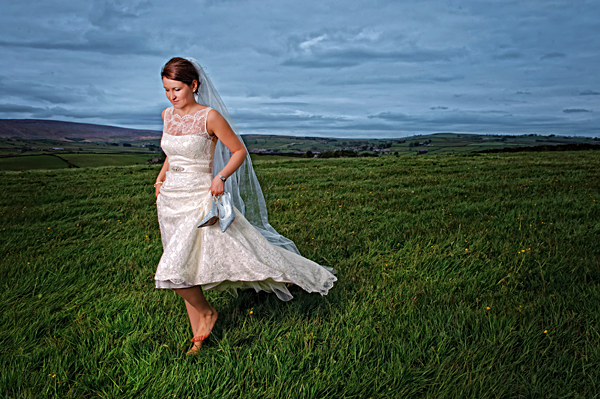 There are times when I photograph a bride and groom during the informal portrait session, when their caharacter really comes to the fore. Laura and Matt certainly fit into this category, and I enjoyed every minute of their company.

Laura was a self confessed country girl, and when I explained my original idea had been to go into the field at the back of the Alma Inn, she asked why I had changed my mind. Well, I explained the ground would be very damp and quite likely to ruin her shoes. It would mean a scrabble over the wall, and may put her dress at risk. Also, there would be a bank of nettles to negotiate into the bargain.

Laura merely waved my concerns aside with laugh, removed her shoes and hitched her dress up, as she steadfastly negotiated the wall and jumped into the field. I then had to prove at twice her age, I could manage the same feat with a similar decorum!

As she squirmed her toes in the wet grass, I asked her if she was fine with this. “I’m a country girl!” was all she would say, with an ear to ear grin.

The above image was actually taken after we had been in the field for a while, and was one of the last from the field selection. But I have to say, it’s one of my favourites because it captures Laura’s spirit very well, as she strode out over the field bare foot.

I had a Lencarta Safari Classic single head camera left at shoulder height, and firing through a 120cm folding Octa. Output was set to 1/2 and at a distance of around fifteen feet.

The day was overcast and had only stopped raining around an hour previously, so although it was 1900hrs in the middle of May, it was fairly dark. Metering the ambient gave me about 1/100th sec at f6.3. (yeah, pretty dark!) I decided to under expose the ambient by a stop and two thirds (-1.6EV) to darken off the background, therefore making Laura “pop” when correctly exposed by the Safari. 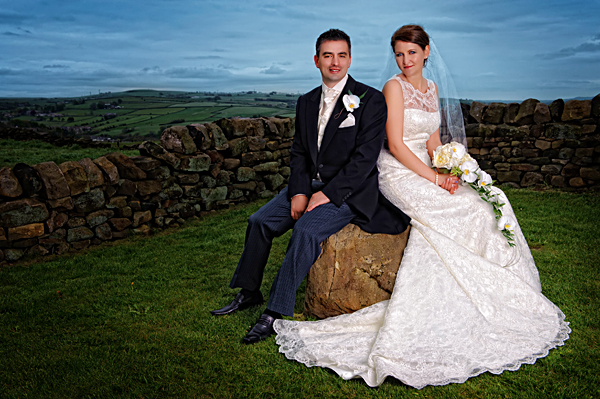 This was taken around ten minutes after the previous image, at the famous boulder just off the corner of the hotel car park. The dark stone wall had a slight affect on the exposure, and I again wanted a similar look to the image, so as there would be consistency with the whole set.

Same single Classic Safari head through a folding 120cm Octa, camera right at shoulder height, and a distance of ten feet. Power output was reduced to 1/4 to compensate for the reduced distance 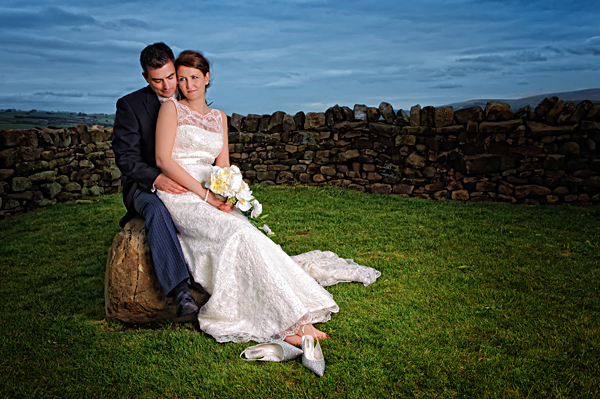 The lighting setup hasn’t changed for this image. Rather, it was simply a change of positions for Laura and Matt.

Beverly Bell is the wedding co-ordinator at The Alma Inn in Laneshawbridge, Colne. She may be contacted on 01282 857837