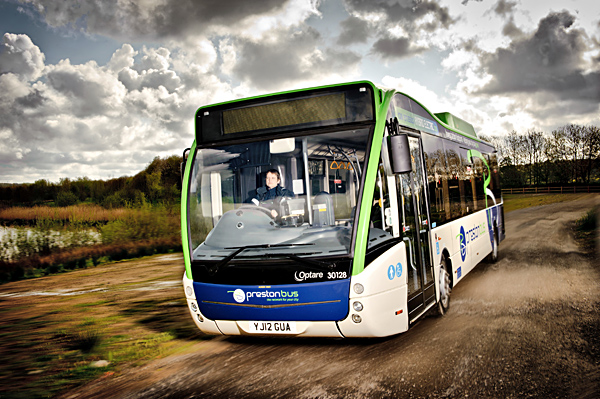 I was contacted by Fiona Whalley, the Marketing Manager for Preston Bus Company, and she had an interesting challenge for me. They wanted one of their buses photographing. Hmmmm, sounded straight forward enough. A rather large vehicle, but do-able. And it had to look “interesting, as we are fed up with ordinary”. Again, pretty straight forward, even on this kind of scale. The bus was also the first of their new hybrid buses, utilising both diesel and electric power, so the image needed to convey the ecological awareness of the company too. Now, this could actually prove to be the most difficult part.

After a few email exchanges, it became apparent the ecological aspect of the image was actually very important to them. It needed to convey the uncertain future we tend to think of when considering traditional fuel consumption etc. and the bus itself needed to really stand out as a solution within the image. It also needed to be away from the usual cityscapes associated with bus routes etc. again to convey the reduced impact on their surroundings.

After quite a lot of research and a great deal of input from friends, we settled on Brockholes Wildlife Sanctuary near J31 of the M6. Not only did we need a rural setting with an ecological theme, we also needed to be able to get a bus in, and be able to turn it around to get out! The management team at Brockholes were extremely helpful, and assisted with planning the schedule, allowing the shoot to extend after closing hours if need be, which really took the pressure off.

I often use a compositional technique when photographing vehicles, which is basically to take several images whilst lighting parts of the image, and then combine them for the finished effect. However, there had been a number of discussions regarding vehicle photography on Talk Photography, and the pros and cons of various techniques were highlighted. These conversations prompted a chain of thought which led me to ask myself if I could manage to light something as large as a bus in a single frame, rather than using a composition. The biggest advantage would be time, especially as I wanted to get the client several images for promotional purposes. (They were to be used on all sorts of media, from websites to timetables and also posters etc). I discussed the matter with Fiona, and we agreed to try the single frame approach, and possibly some composition techniques towards the end of the day.

Well, the weather on the day proved to be pretty much ideal, with intermittent sunshine and lots of clouds that were moving rather quickly. Great, as we can have several looks to the sky within a very short period of time.

The above image is actually one of the last of the day, and I wanted to give the image a more lifelike quality, rather than the static images I’d already taken of the bus standing empty etc., although the movement would be added in post. To this end, I needed a driver to be visible.

Now, the lighting. I had a Lencarta Safari Classic single head at half power immediate camera right at head height and firing through a high intensity reflector. It was pointed to the near corner of the bus, so as to light both the front of the vehicle, and also along the nearside as much as possible. I then had a Lencarta Safari Li-on single head at 300ws output (head plugged into socket A, and A+B activated with output set to 4.0). Again, a high intensity reflector was utilised. The head was placed so as to light the rear two thirds of the bus, with the angle of incidence being around 45 degrees to aid light fall and reduce the possibility of reflections.

The ambient light was metered for and then underexposed by around a stop and a half (-1.5EV), to increase the contrast and texture of the clouds and also to darken them, helping to add drama to the scene. The foreboding sky was to be part of the “uncertain future” aspect of the image discussed earlier, and would be enhanced in post processing.

Below is the image pretty much straight from camera, and converted via Lightroom 3 ( I really must upgrade to 4!) 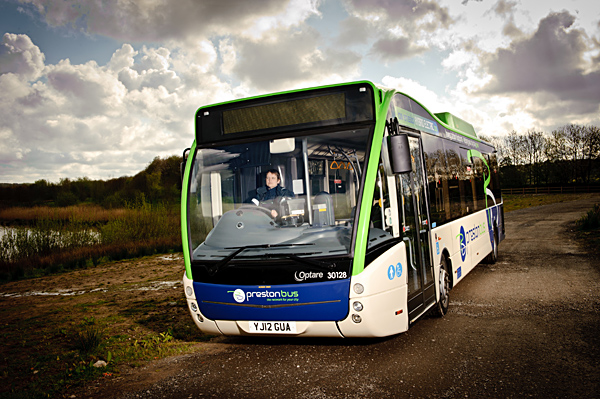 As you can see, there are few aspects that needed attention. The sky need to have more threatening feel to it, I needed the interior of the bus to have a little more visibility and I wanted a bit more punch to the image overall. To achieve this, I made judicial use of DynamicPhoto HDR.

Finally, I used Photoshop to add the motion.