The Love Seat and Patio 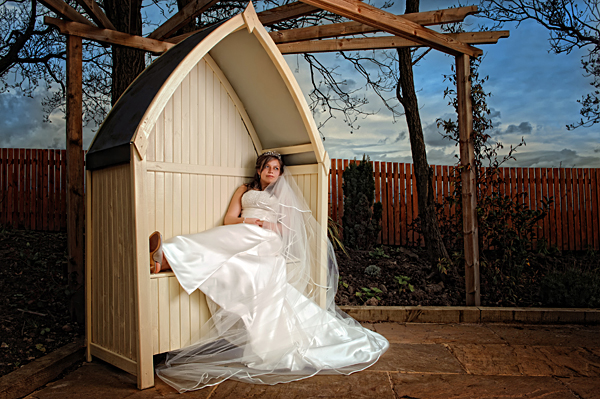 There are times when you look at a particular setting during the day, and think “Hmmmmm, s’pose it’ll do.” and you leave it at that. This was one such area at the Red Hall Hotel in Bury, all brand spanking new and early in the day it seemed uninspiring. However, as the light started to fade a little, it took on a whole new character and I fell in love with that little patio corner. Strange   🙂

Initially, I felt the fencing would be a problem, and particularly as the border flowers hadn’t really started to do anything (This was the first week of April). As the ambient light levels dropped, and I lit Liz within the little love shelter (I have no idea what it is, or what it’s called, but it makes a great prop!), The light falloff meant the fencing and border were of little distraction anyway, and only served to focus attention on the seat and Liz.

I used a Lencarta Safari Classic with a single head at 1/2 output, firing through my all time favourite 120cm folding octa. It was to my right and about shoulder height, mostly to ensure the seat roof didn’t cast an ugly shadow within the cover. You can pretty much gauge the angle of light due to Liz’s shadow from her head. You’ll note the shadow is still quite soft due to the size of the modifier, even at a distance of some fifteen feet. That’s why it’s my “go to” modifier  🙂

I had already taken a quick shot of the unlit patio to gauge the ambient, giving me 1/80th sec and f11 at ISO200. By raising the shutter speed to 1/160th sec, I effectively underexposed the ambient light by a full stop (-1.0EV), causing the sky to saturate a little (making a better blue than the almost white in the test shot). This also had the benefit of darkening off the fence and border, ensuring they were less likely to catch the viewer’s eye. 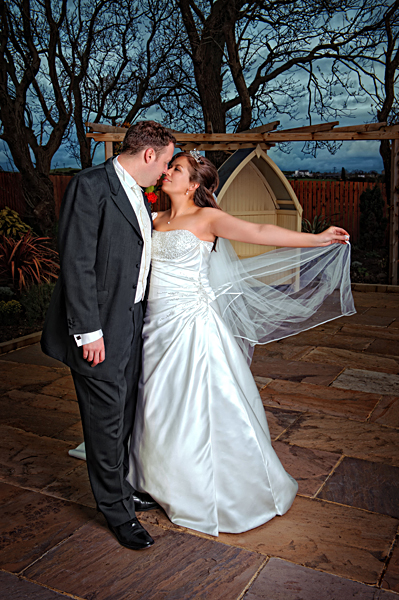 This was basically the same setup, but with the Octa a little closer and the Safari turned down to 1/4 output to compensate. I also wanted the ambient lowered a little more, although not a great deal. I opted to increase the shutter speed to 1/200th sec, making the ambient underexposure around a stop and a third (-1.3EV). I just love Liz’s expression. 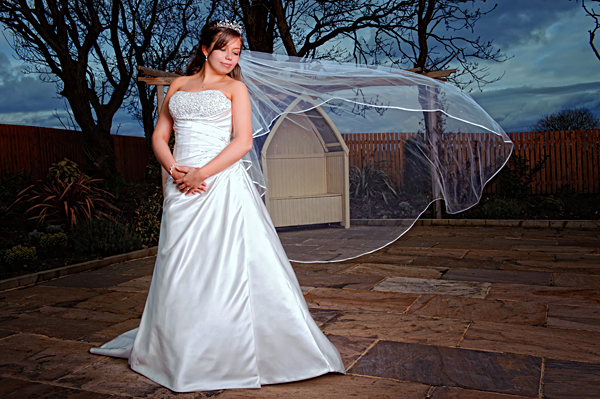 Exactly the same settings as the last image, but you can see the sky darkening slightly as the light faded.

I seem to be getting a run of photographers as brides or grooms just lately, which is fine. It’s actually quite nice to explain what I’m doing during these informal portrait sessions, and answer any questions they have. Liz is a well established photographer dealing in PR and weddings. She can be found at Liz Henson Photography.

Well, photographing photographers doesn’t phase me. They know what they want and they understand the route to get there. That’s fine. They also have a critical eye and watch everything I do, which again is fine, as I like to discuss technique with anyone who’s interested.

Liz had me a little on edge though. Not only do I respect her work, and can talk to her for hours about the stuff she does or I do, we also regularly talk about business and where it’s taking us. No, it wasn’t really any of those that bothered me. I met Liz at a wedding in August 2008 and we gradually became very good friends. We all want to do the best for our clients. We want to do the very best for our friends and family. But a good friend who is a successful professional photographer in their own right?