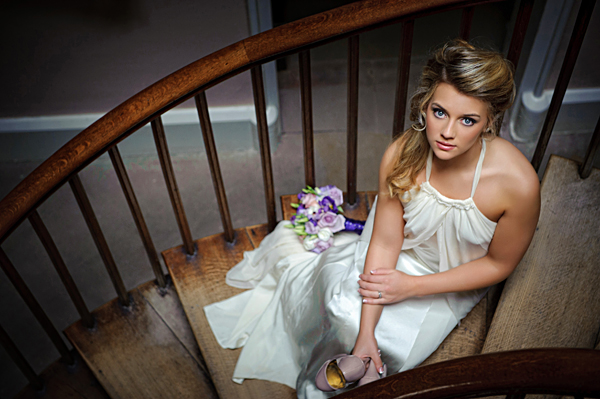 Calthwaite Hall is a beautiful location for a wedding, and as such, I had been asked to photograph their wedding brochure. Calthwaite Hall was originally built out of cut stone in 1837, and was designed in the Elizabethan style. The south front porch and east front centre reflect the gothic style of architecture, and the stairs and pillars are decorated with carvings. After being left derelict for many years, the Hall has recently been restored to its former glory by its current owners. The main feature that caught my eye was the free-standing spiral staircase in the hallway, which relied on ambient light due to the glass ceiling. Absolutely stunning!

I had previously arranged this shoot for the last week in February, but travel delays for the models, stylist and makeup artists meant they arrived at 1600hrs and the ambient was no longer a factor for the shoot, and we rescheduled for April. The resultant portfolio handed to the Hall owner, I believe, justified the return.

The stairs are simply quite amazing. The above image is all ambient light. This is why the original shoot was doomed to failure due to the travel delays the girls had to endure.

My original assessment of the stairs gave me the idea I would need to utilise at least 75% ambient light, with some fill or even highlight from the door end of the corridor. However, during the shoot, it became obvious the large glass ceiling actually allowed the light to effectively wrap the stairs and the model, and additional lighting wouldn’t be required. It’s very rare to find an ambient light situation that actually fits what you want to portray. 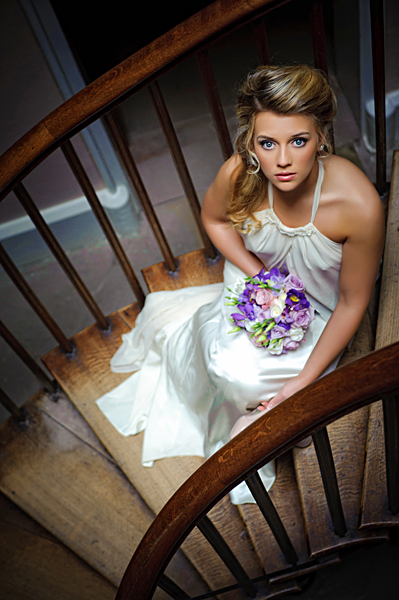 A different orientation for choice within the brochure. 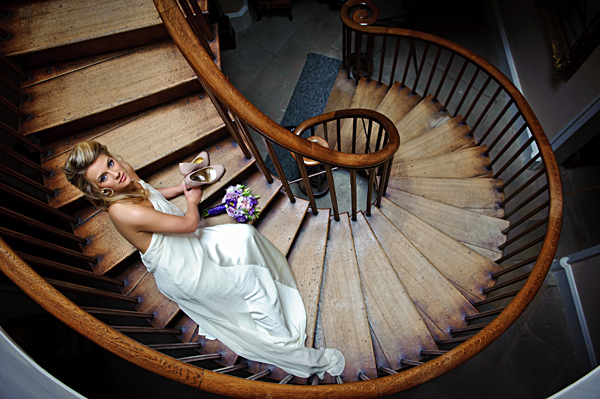 These are the stairs in all their glory, and they’re a fabulous backdrop, prop or however you wish to view them. 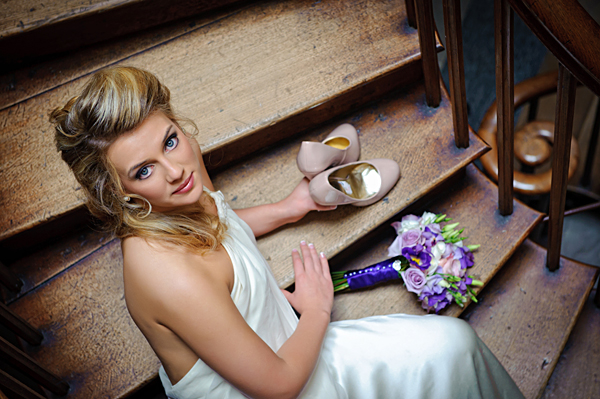 And sometimes, ambient light really is the only light required. It’s a shame it happens so rarely, but then again, that’s why we take all our lighting gear on our various jaunts   🙂

All the above were taken from a viewpoint above Josephine, with the large glass ceiling providing the light from above my viewpoint. One of the reasons why it works so well. However, we also needed an image from the entrance, that would show the full spiral staircase, along with a bride and groom. In this instance, the light from the ceiling would fall behind the bride and groom, and due to the lack of light coming from the hallway, it would effectively put them both into silhouette.  To rectify this, I would certainly need additional lighting from the hallway to illuminate the couple, but I would have to carefully balance it with the ambient light level falling on the staircase. I used a single head Lencarta Safari Classic, with output set to minimum and firing through a 120cm folding Octa. The Octa was placed at around seven feet high and something like 35 feet from the bride and groom. My main concern was the fact the ambient light is actually quite low, and I’d need to use a fairly high ISO to ensure I caught it. 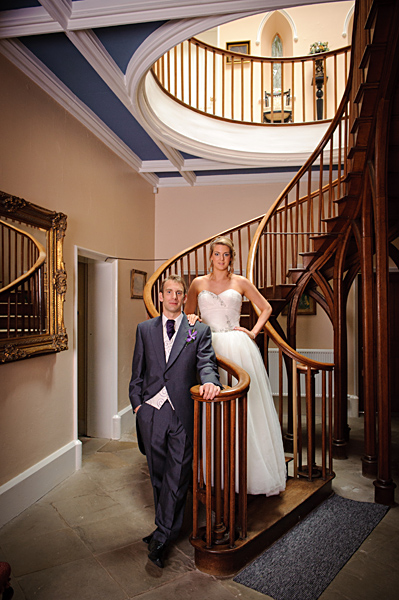 All in all, a very productive day, and certainly worth the wait.

Special thanks to Allan Vincent of Hot Coffee Photography for his help on the day.

Makeup and styling was provided by Sonara Parker

Gowns were provided by Beckett’s Bride