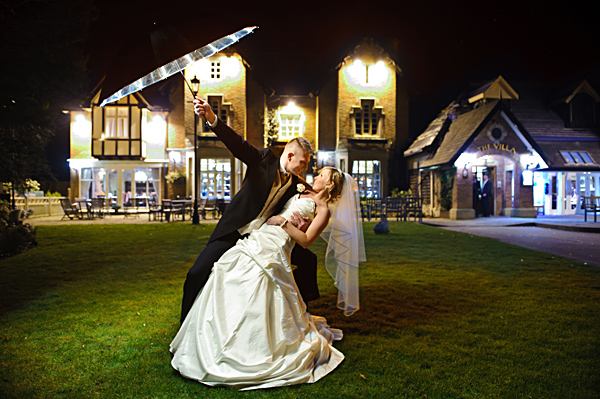 Winter weddings can be very challenging. If the weather’s good, chances are, it’ll still be incredibly cold. This wedding was on the 14th January, and whilst we had watery sunshine, it was absolutely bitter.

At this time of the year, no matter how early the wedding breakfast finishes, the chances of having any ambient light to play with for the informal portrait session is pretty remote, to be honest.

We were at The Villa, in Wrea Green, just outside Preston. A beautiful venue with bags of character, and staff that have a vested interest in the bride and groom’s enjoyment of their day. A real delight and a pleasure to work there, as all the staff would go out of their way to help in any way they could.

Our biggest challenge came as we started to get the informal portrait session organised. I’d originally identified a couple of really nice lounge areas opposite the bar, but as the wedding breakfast finished, these two areas very quickly filled with wedding guests. Another area that had been identified was now filled with a casino and other gaming tables.

I had a look further afield, and found some beautiful areas within the restaurant. Each area had its own character, and would have made a superb set of backdrops to be honest. Unfortunately, our timing couldn’t really have been any worse. As soon as I realised the restaurant would be a great place to work, the restaurant guests began to arrive, and I really didn’t want to cause any kind of distraction to the arriving guests, or the staff for that matter.

There was only one thing for it, the garden.

I wasn’t looking forward to this one, as the temperature was falling rapidy, and I knew I would have to work extremely quickly so as not to inadvertently kill my bride and groom!

I pushed a Nkon SB800 speedlight into a 105cm parabolic umbrella, and got my wife Anne, to stand in for the bride and groom as I checked the settings. I utilised a Yongnuo RF602 radio trigger and set the output to 1/8th on the speedlight. The first test shot showed I was a litte under exposed with the aperture at f5.6, so I opened it up to f3.2 and found the image to be pretty much where I wanted it.

A couple of other points you should know. I had the ISO set to 1600 so as to pickup the detail in the hotel behind the couple, and I knew the whitebalance would be different for the building and the couple, although I gel’d the speedlight to CTO in a bid to get the couple lit somewhere near the light colouring the hotel.

The bride and groom did the first test shot with warm overjackets on, mainly so they could get an idea as to how long the exposure would take (0.4sec or around 1/3rd sec), also the groom needed to see how important his positioning of the umbrella would be, and the bride needed to see how her pose impacted on the overall scene.

The second test shot was exactly where we wanted to be, and then it was a quick throw off of the jackets, a quick pose and then pop, back on with the jackets.

The Villa at Wrea Green is a superb venue, and I would recommend it without hesitation. Stewart McIntosh is the General Manager, and he may be contacted on 01772 804040 or stewart.mcintosh@thevilla.co.uk

Two other images from the day. The first is from the bridal portrait session immediately before the service. 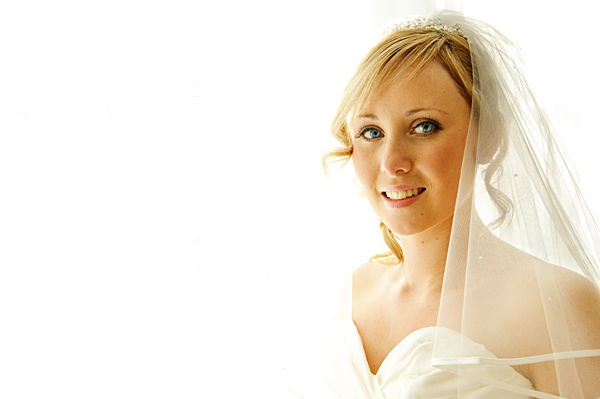 The last image is from the first dance. All ambient without additional lighting. 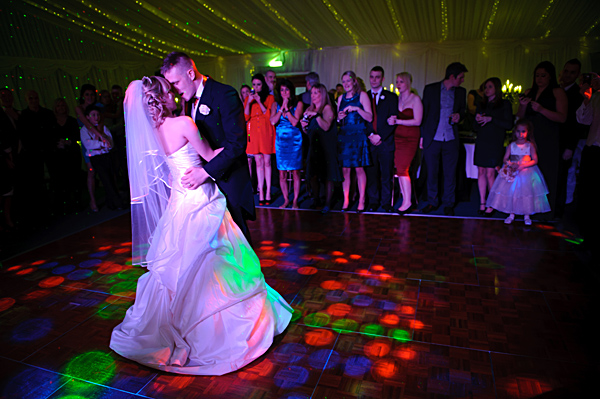