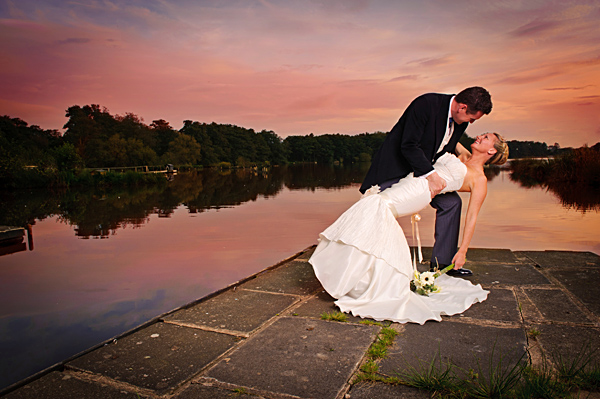 There’s nothing I like better than being able to provide something a little bit special for my brides and grooms. This is Nicola and Tony on their wedding day. A couple that flew in from Australia for their wedding at Clevely Mere. Believe me, it was a lot of fun!

The above shot was taken with the last throes of dying daylight. I used a single head on the Lencarta Safari Classic, camera right on an air damped stand at a height of around two meters. It was fired through a 120cm folding octabox, and literally only just out of frame. The output was set to 1/4

It took a few goes for Nicola to feel entirely comfortable with the pose, and also being able to review the image on the back of the camera meant she could see where it looked a little awkward and change her position accordingly. (Thank God for digital!!). 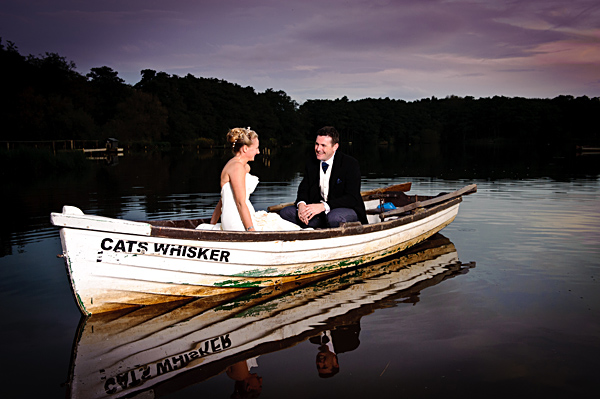 This particular image was far more demanding on both the bride and groom and myself. Tony rowed towards the targeted area (where the light was to fall) and quickly withdrew the oars and sat down, trying to look relaxed. Most times the timing didn’t quite come off, and Tony sat down just as they passed through the target area and out the other side. Anne was also trying to track them with the octabox, but seeing as she’s only 5’2”, I think it was unfair of me to ask her to swing it round. Mind you, she did look funny almost dangling off the bottom of the octa, just don’t tell her I said so!

Anyway, after several attempts, we finally managed two or three images we were all happy with, along with a load of bumps on our scalps, thanks to the mosquitos. Great!