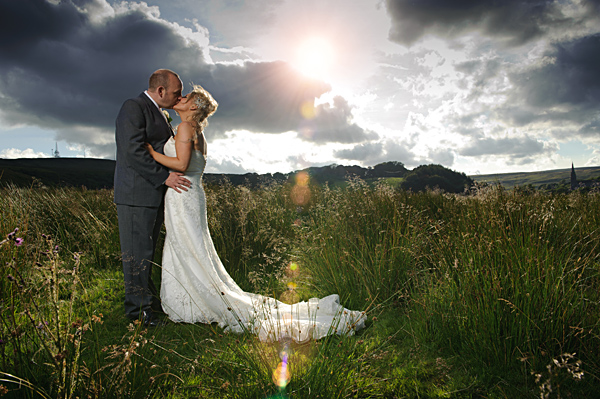 This is a technique I’d been wanting to use for some time, and just wasn’t presented with the opportunity. Either the weather wasn’t right, or the background wasn’t good, or the image just wasn’t going to suit the couple. However, this time it all fell into place. And the irony of it is, I had the right weather, backdrop and suitable couple only two weeks later. Sods law!

Donna and Darren had a church wedding, followed by their wedding breakfast at a secluded country restaurant, the San Marino Restaurant in Belmont. Now, the restaurant was full of character, but wasn’t really suited for the informal portrait session that we like to do for the bride and groom between the wedding breakfast and the evening reception. Having said that, the staff were brilliant, and ensured we had sufficient room to get some really nice images around the fireplace.

During the meal, I’d taken a short walk over the road to explore the possibility of using the open field opposite. The rough grass and broken cloud would make a lovely stage and backdrop for Donna and Darren, and it was a one minute walk if they dragged their heels. (This is a bt of an “in” joke, as Donna was wearing Jimmy Choos, and immediately robbed her bridesmaid of her shoes to use in the field!).

I had to work quickly, as the sun was in and out of cloud like a yo-yo. I metered for the ambient at an ISO of 200, and then increased the shutter speed to 1/250th sec to underexpose the ambient by almost a full stop. I was using an aperture of f10, as this would allow me to get the sunburst effect. The smaller your aperture, the more pronounced the effect. My main concern was the possibility of reduced contrast due to the expected and desired lens flare, but by having the couple further to one side and away from the path of the lens flare, the contrast remained pretty good.

This meant the couple were basically silhouettes, until lit from my side. Well, to my left actually. I had a Lencarta Safari Classic with a single head, firing at full output through a 70cm white beauty dish. The light stand was fully extended to about 7½ feet, with the beauty dish angled down to the couple. 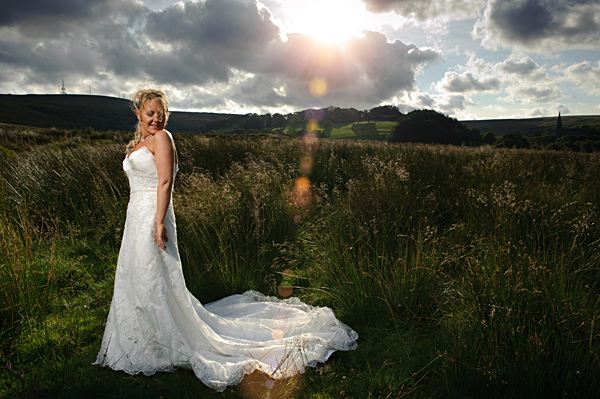 This image was one of the last before the sun disappeared behind the clouds for a while. Same technique, but with the aperture pushed to f11, as I was getting a hotspot on the front of Donna’s gown. You’ll notice the grass to the right is darker as a result. The Lencarta was still on full belt.

It was nice to realise a long held plan. In fact it was something I’d had in mind for well over twelve months, but didn’t have the right circumstances come together. And like buses, you wait for ages, and then you get a couple coming along at the same time!