A Parasol at Twilight 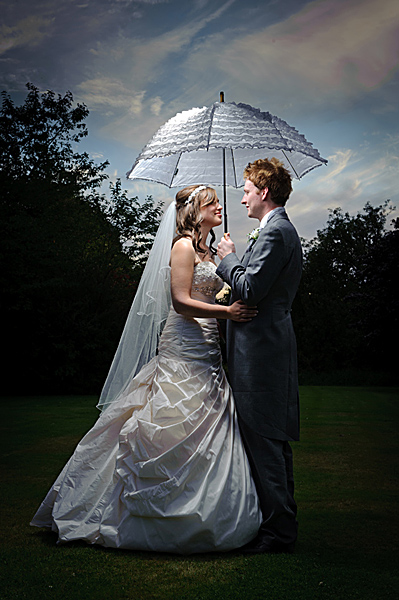 This image is from the last part of the informal portrait session I tend to do, between the wedding breakfast and the evening reception. I’d gotten some nice backlit shots with the Lencarta Safari, but wanted a change of tack.

Anne suggested making use of the parasol, although at first she was thinking of the shadow effect I had done previously. That wouldn’t work here, as the parasol has a ruffle effect, which would certainly have disrupted the shadow etc. However, the suggestion sparked a further development of the same idea, which was to light the umbrella from the inside, basically utilising the parasol as a reflective umbrella, although a large amount of light would also pass through with it being a white nylon type material.

At first, I had considered using a manual trigger setup, such as the Yongnuo RF602, but then dismissed it purely on the grounds that there may be a number of adjustments required to get the desired effect. Instead, I chose to use the Radio Popper PX system, which would allow me the choice of iTTL or manual, both of which can be adjusted from the SU800 on camera.

The ambient was still quite bright, so I used an ISO of 200 and the metering showed that using a shutter speed of 1/160th sec in conjunction with an aperture of f10, I would underexpose the ambient by about a stop and a third, which would nicely silhouette the trees and bushes in the background, and darken off the grass quite considerably. The sky itself also took on a darker shade with better contrast for the clouds.

Of course, my bride and groom were also silhouetted, which would be remedied by the speedlight. I married the speedlight up to the Radio popper receiver, and tucked it into the ribs of the parasol, pointing up towards the parasol itself, and fitted it with a Stofen type diffusion dome. This way, the light would be much softer when hitting the bride and groom, providing a wrapped effect. You can see the hotspot of the speedlight head in the parasol itself, just above the bride. The speedlight would need to compensate for the overall under exposure of the image, which I did by setting the output to +1EV (+ 1 stop).