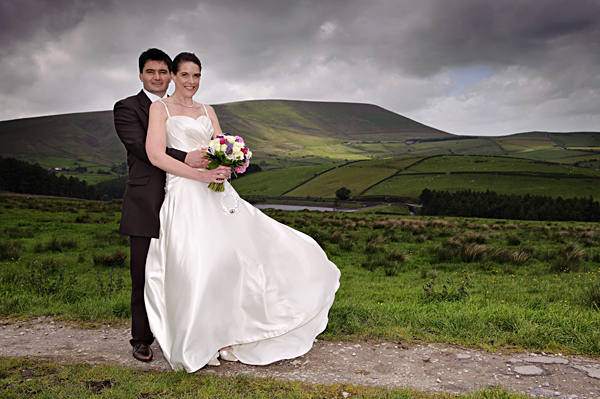 The bride had one particular request when I met the couple six months before the wedding. There was no room for bartering or negotiation, it had to be adhered to. They both wanted a portrait with Pendle Hill in the background.

Luckily, I live not too far from where I took the image, so had an idea as to where we could get an uninterrupted view and avoid stone walls and telephone lines. Well, not quite the telephone lines, as I had to remove it from the final images. (The line impacted a little more than I had hoped).

The day was very windy and the clouds were shifting at quite a pace. Just my sort of day really   🙂

We drove to the selected area before the bride and groom transferred from the bridal car to mine, which is a 4×4 and would certainly make an easier ride of the last 200 yards along the dirt track.

I used the Lencarta Safari Classic, coupled to a 120cm folding octabox, which I had to tether using guy ropes to prevent “take off” with the winds. I set the output to about ½ and had the flash head at about head heat and immediate camera left.

As the day was quite darkly overcast, subduing the ambient light wasn’t really a problem, although I had no intention of “turning day to night”. Rather, I just wanted to subdue the background and light the couple enough to give them a bit of a lift so as they’d “pop”.

My biggest concern during this shoot, wasn’t the weather or the challenge regarding lighting etc. I was more concerned for the lighting equipment, as even though it was quite securely tethered to three points, the octabox was still waving around and being somewhat battered by the wind. I carry a pouch of tent guy ropes, tent pegs and a mallet to every location shoot. I learnt from experience, the necessities of securing your gear on location. Ok, so I was actually very lucky when I received my lesson, as I was working with speedlights on that particular day, and it only cost me a decent umbrella.

The images below utilised the same lighting position and settings, as although the clouds were shifting at quite a pace, we didn’t get a patch of sunlight over our bride and groom, which would have been quite nice. Never mind. 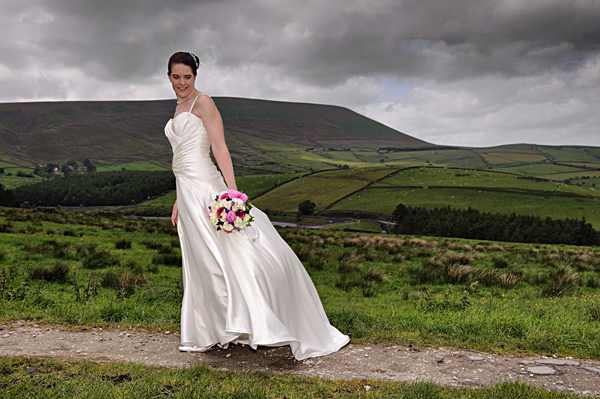 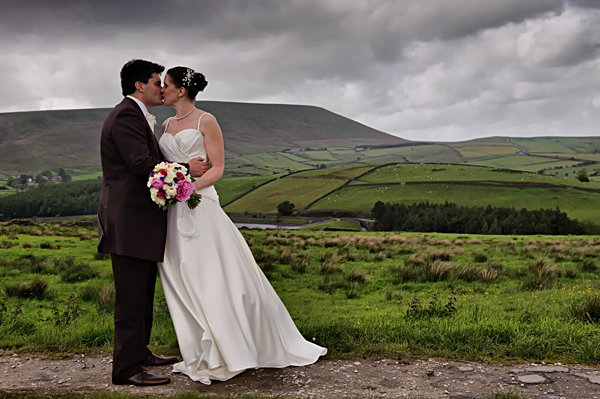 This last image was taken during the informal portrait session. This is the time of day during a wedding that I really enjoy. It happens during that dead time found at all weddings, which starts immediately after the wedding breakfast, and tends to last until the start of the evening reception. I tend to utilise around 45 minutes of this time for the aforementioned portraits. 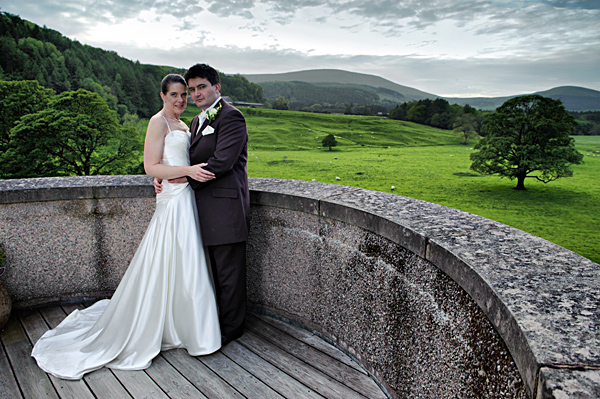 This is the balcony to one of the bedrooms at the Inn at Whitewell in the Forest of Bowland, nr Clitheroe. Taken fairly late in the day, something like 2000hrs, and with the light fading quite nicely. On this occasion, I wanted to preserve the ambient lighting so as the detail of the scenery would show quite nicely. I was shooting towards the sun, although it was generally hidden by the clouds, but it still gave a nice rim light to the couple. In all honesty, they weren’t too dark considering they were being back lit, and I needed the lightest flick of light from the safari to just bring up the detail on the dress. The groom’s suit probably needed more to bring out the folds of the suit jacket, but any more light than I used would quite likely cause burn out on the dress highlights, so this was a bit of a tradeoff really. And we all know the bride always wins!

Lencarta Safari Classic with a single head, fired through a 70x100cm softbox at about head height, camera left. (See the groom’s shadow for indicated direction). The output was pretty much at minimum.

The Inn at Whitewell