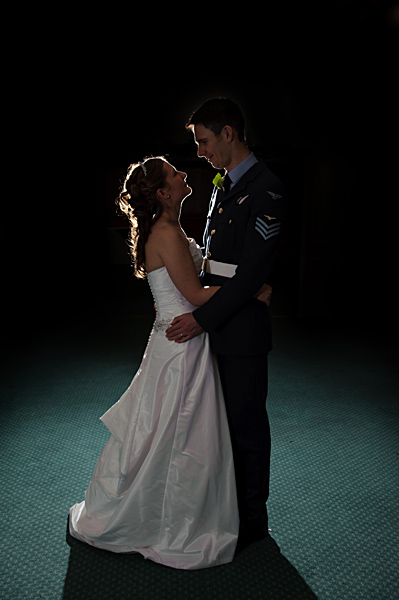 This was a rather nice wedding, partly because it coincided with my birthday (so I had a thoroughly enjoyable day sharing someone else’s celebrations) and partly because it was in the middle of all that Christmas snow.

I had intended to use an image from the outdoor session, with the snow etc, but rather liked this particular shot, so I’m afraid you’re stuck with this one  🙂

With it being just two days after the shortest day of the year, daylight was in rather short supply, and soon disappeared before the end of the wedding breakfast, leaving just the interior of the hotel to utilise for our informal portrait session. the Garstang Country Hotel wasn’t too busy just two days before Christmas, so we were able to use a couple of empty rooms. The lights in these rooms were various shades of tungsten, so I gel’d the speedlights to match, putting one the far side of the couple and flagged to cut out unnecessary illumination of the walls and ceiling. A second speedlight was to my left and held by an assistant. The second one was to provide some fill so as the couple were not complete silhouettes.

Both speedlights were controlled by an SU-800 commander unit and were used in manual mode. As the shot was indoors, the infra red signals from the commander unit coped fine, although I rely on infra red far less than I used to, as even indoors I have found strenuous light can interfere and cause problems, so I tend to gravitate towards radio triggers nowadays, such as the excellent Yongnuo RF-602 series.