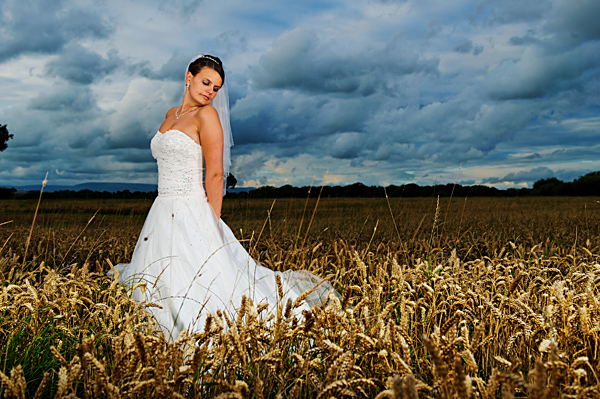 The weather was pretty abysmal, light showers on and off all day, whereas I’d been hoping for a clear blue sky to make an impact on the wheat field. Well, it just wasn’t going to happen, was it.
So, I have to work with what I have, and if the sky is overcast and threatening, make it a feature.

I underexposed the scene by a stop to a stop and a half (-1.0EV to -1.5EV) to saturate and increase the contrast in the sky. Of course, this also does the same thing to our bride, which isn’t good. To combat this, and effectively overexpose the bride to compensate, I used three speedlights, each set at 1/2 power. Why three? because I wanted to spread them out a little to act as fill for each other. Also, using three speedlights at a lower power setting means they’ll recycle quicker than using one at full power.

I also needed the speedlights to be far enough away, to be out of frame. No modifiers were used, other than stofens, mainly due to the distance and the fact any modifier would just eat power anyway. Plus, as I’ve already mentioned, using three speedlights would help fill any shadows, thereby reducing that “hard lit” look.

Taken at Beeston Manor, near Hoghton which is not far from junction 3 of the M65 (Superb wedding venue with great staff and owners who really look after their guests and it has excellent photo opportunities too. I highly recommend it )

Many thanks to my rather unassuming and beautiful young bride, Louise.