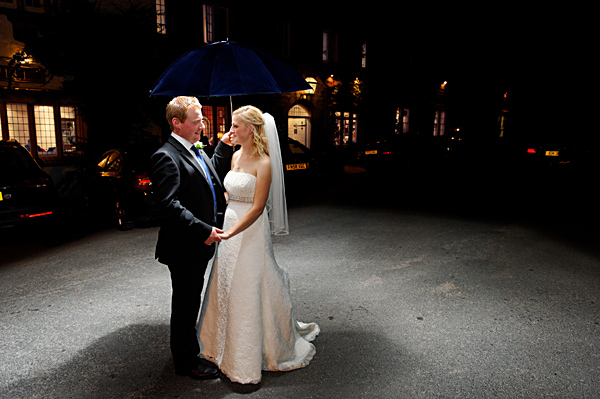 I like weddings that are held later in the day. A far more relaxed affair.

I have time to get ready at a leisurely pace, and the whole day is at a different, laid back sort of pace. Really nice. But there can be draw backs too…

This couple had flown in from the States, along with friends and relatives. The service was mid afternoon, with the wedding breakfast at the Inn at Whitewell, nr Clitheroe (A superb venue with a brilliant wedding co-ordinator. Ask for Sharon). The bride was exceptionally relaxed and very accommodating, allowing the day to run its course. The service and group photos went well, along with a shoot at some stepping stones across the river. The wedding breakfast began a little late, which was still fine, but went on a little longer than anticipated.

The speeches were at the end of the wedding breakfast, before an open mike session with various relatives recounting stories and anecdotes about either the bride or groom, or sometimes both. This was a first for me, and it was a great part of the day. I’ll certainly mention it to some of my future clients.

With the number of speakers, it soon became quite late. In fact it was pitch black outside. Oops!

I had yet to do the informal portrait session with the bride and groom, and my options seemed to have disappeared with the setting sun! There was a possibility of some interior shots, but it was a working country hotel and bar, so there were customers literally everywhere. The interior was pretty much out.

It had to be outside, and it was going to have to be lit. Do I try and make it look daylight? Nah, it would look rather odd with the light falloff. My only real option would be to do it as a nightshot, but light specifically the couple.

I stuffed an sb-800 flashgun inside the spokes of a reflector umbrella before asking the couple to stand in the middle of the hotel carpark. A couple of test shots helped sort the exposure, before taking the above keeper.

The ISO was set to 1600 and shutter speed at 1/60th, in an effort to record some detail of the lighting around the car park etc. I was surprised at the coverage of the light from the umbrella.

I did wonder about calling it “Love Light”, mostly due to the closeness of both families as a whole, which seemed rather amplified in the B&G.

Many thanks to the couple for a superb day.