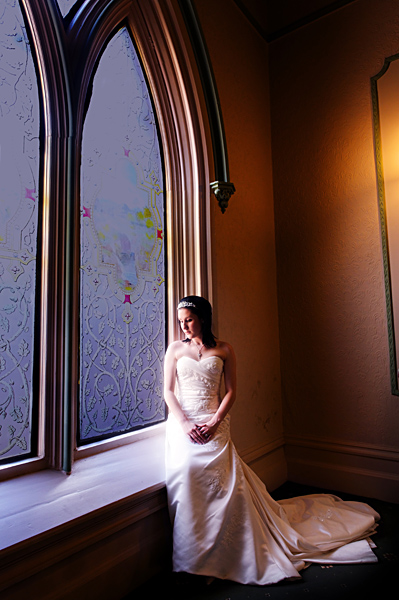 A rather large stained glass window, at the top of the stairs. You just can’t ignore a setting like that, it would be unjust. However, it isn’t that late and it didn’t actually present as subdued as it looks here.

I wanted a nice, atmospheric, early morning light (or late evening light, if you prefer) but even though the weather was quite overcast, it was still strong enough to be too bright and contrasty. It also spilled too much light into the background and foreground, making it a little too distracting from our window and bride.  The hotel interior lights were standard tungsten, which was fine for what I had in mind – a rather nicely warmed tone to the interior.

If I exposed for the interior, I’d get a lot of unwanted detail, a well exposed bride for the most part but likely blown highlights on the window side, and of course the window detail would be blown to hell!

I could go the route of HDR, but it wasn’t really going to be helpful when I didn’t really want the interior to carry too much detail. Besides, it wouldn’t have the atmosphere of late afternoon light.

I exposed for the incoming window light, ensuring the brides dress retained detail, although it’s certainly a close call on her right thigh, but this has been exaggerated a little with the post processing. Talking of which, what did I do?

The first thing was to darken off the windows a little, using one of Stuart Little’s burn actions (found in his Retouchers Toolbox),  I also used a glow action from Stu’s Creative Colour Lab on the bride, although I dialled it back and also masked out the effect from the rest of the image. That’s pretty much it, except for a little more burning of the interior to darken it off a bit more.

I have to admit, Stu’s actions tend to be the first port of call when post processing, and I invariably start with his Workflow Essentials which are actually free!, although I also make use of his ultra cheap Workflow Essentials Panel that works hand in hand with them.