Preparation of the Groom 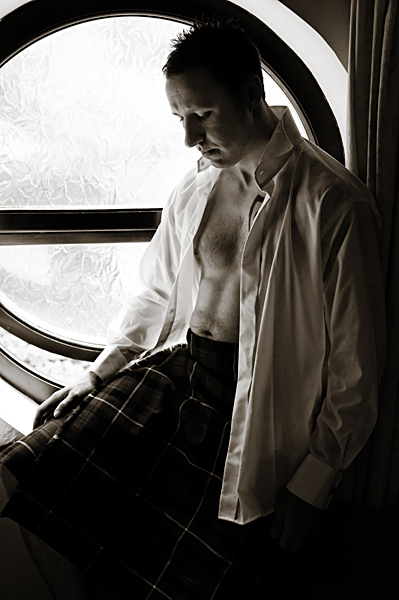 The bride at this wedding didn’t want the usual bridal prep as she was a little camera shy (although she threw herself into the later photo opportunities with some gusto, and rightly so, as she was a beautiful bride).

Hmmmm, a wedding album without bridal prep shots. Not something I felt comfortable with, as I felt the album would be incomplete. I certainly wasn’t about to put my worries to the bride, that would be unfair. So what were my alternatives?

After discussing with the groom, we decided to turn the tables on the “usual” bridal prep and this is one of the results. Whereas I usually work towards a few sensual bridal portraits, on this occasion I wanted to provide images for the bride, in a similar sensual manner of the groom.

Why pass up an opportunity?

The groom was actually very obliging, and quickly grasped the idea behind the concept, making it very easy to get what I wanted. I fully expected a flat no, to be honest. Most guys are too self concious to entertain such a “posy” concept, or maybe I’ve simply chosen to ignore the possibilities rather than take the chance and ask the groom.

Mind you, with an example to show future grooms, I feel the likely hood of a flat out “No” is going to be reduced.

Many thanks to the groom for playing ball, and to the bride, groom and their families for such a brilliant day.

As regards to not being able to get the shots you want, I believe I’ve said it before, or if I didn’t say it, someone else did! If you can’t get what you want, want what you get!