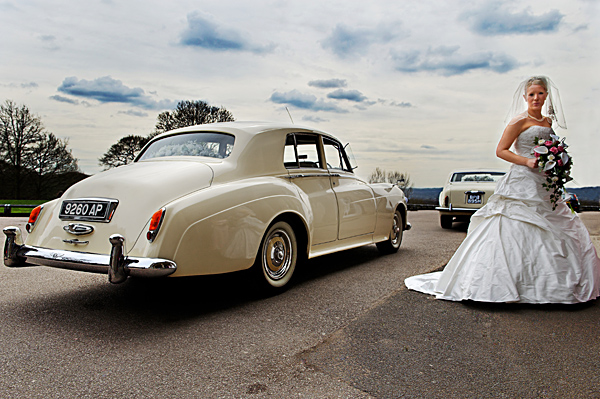 Another overcast day, and a similar problem seen in the previous blog post. However, due to distances involved, and the fact I also wanted the dramatic sky to aid the image, I chose a different technique here. Whereas in the last post I mentioned judicial use of extra light to pop the image, this wasn’t really going to be an option here, and I was going to have to think a little further a head.

With the sky pretty much a vast white blanket with very little detail, I decided I would provide a little additional light to the bride, and really only to aid in filling the shadows.  I wanted to be careful not to get a highlight from the flash in the chrome of the car’s bumper (that would be “fender” to our friends across the pond!) as that would be seen and would draw attention. To avoid this, I shielded the flash from the car by standing between the flash and the vehicle, masking the light output.

The final part was carried out in post production, reducing the exposure of the sky in a second version of the image, and then blending the two to give it that dramatic look.

I often find I’m shooting for an image I have in mind, rather than the image I can see before me.