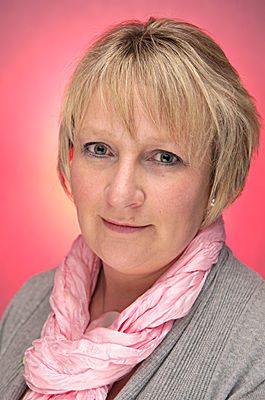 The image above was set up, tested, shot and then dismantled, all within 15 minutes. The client is an Assistant Director of BNI (Business Networking International).
It was taken early afternoon at the Bolton Wanderers Soccer stadium (The Reebok Stadium in Bolton) in a rather large room with the lights off, all ambient light coming from a wall of glass camera right (huge windows overlooking the soccer pitch). It wasn’t particularly bright outside (dark clouds), so killing the ambient was going to be a piece of cake!

The reason for killing the ambient was to take control of the backdrop, which happened to be blue wallpaper, and Nicola was wearing a soft pink neck scarf which would have shouted, so I needed to change it to pink(ish!)
ISO 400, f5.6 1/60th sec actually shut down the ambient really well. I used the Nikon CLS to manipulate the flashes, controlled by an SU-800.
Two brollies were used in a clamshell setup (great for softening portraits and reducing postwork!)
Upper strobe at EV0.0 (meaning it was just standard setting). Lower strobe at EV-0.3 (meaning it was set to 1/3 below the correct exposure), so as to provide definition to Nicola’s face.
Neither of these two strobes were gel’d as the ambient was daylight. Even though it was effectively killed, any seepage of daylight had to be accounted for, so I set the WB to Cloudy, which is ever so slightly warmer than standard flash WB and good for skin tones.

Now then, the background strobe was on a stand about 5 feet behind Nicola, and facing the wall. It was actually about 6 inches from the wall to give a hot spot and then fadeout. It was red gel’d and set to EV-0.7 to underexpose by 2/3rds
The strobe itself was almost head height with Nicola, and hidden because it was in direct line with Nicola and the camera.