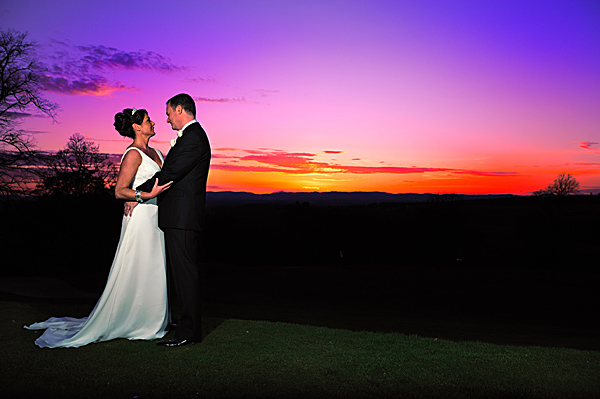 ok, what do we have here? Seeing as sunsets tend to be in short supply in the UK, I try and make the most of any sunset that coincides with an event I’m photographing, and last Saturday’s wedding was one such event.

How was it done? Fairly simple OCF (off camera flash) rules and basics. I underexposed the sunset to enrich the colours by setting the Nikon D3 ISO to an equivalence of 100 and using a shutter speed of 1/250th (tiny amount of curtain shadow starting to show along the bottom of the frame, but not enough to worry about).

Using my all time favourite lens, the Nikkor 24-70 G f2.8 at an aperture of f4.5, I was effectively underexposing the scene by around two stops. This of course also underexposes the bride and groom by the same value. To combat this, I had an SB-900 camera right at head height and just out of frame, along with a Metz 54 MZ-3 camera left just out of frame. Both strobes were at 1/2 power to compensate for the underexposure dialled in-camera.

Both strobes were gel’d with full window green and the D3’s white balance was set to fluorescent. This has the effect of emphasising the sunset colours and giving that lovely magenta hue along cloud lines etc.

One thing I found when post processing, the D3’s fluorescent setting is for a cool white fluo, and does not match the window green gel exactly. It’s not out by much, but enough to give a very slight green tint to the dress in shadows. This was rectified by setting the white point to the grooms collar which I knew was white, whereas the dress was an ivory colour. The added bonus was the deepening of the sunset colours when the white balance was set correctly.

Taken at Murrayshall House Hotel in Perth, Scotland. A superb venue for weddings of any size, but especially smaller, more intimate weddings.