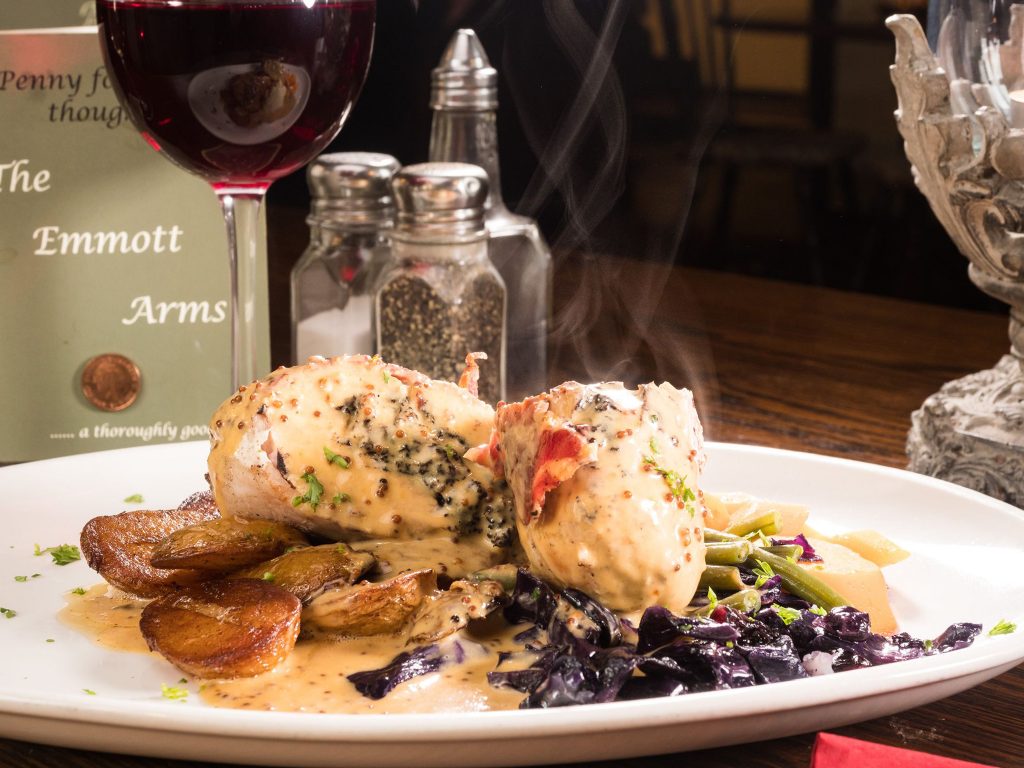 Mark, who owns the Emmott Arms, asked for a full range of images. This was to include food photography, and also interior and exterior images. He also wanted to include some staff imagery, although rather than headshots, he wanted lifestyle images that would reflect the character of the establishment.

I normally set a simple two light setup for food. A decent sized key light, and an accent light for my specular highlights. However, I always tend to have a third light setup and ready to go when needed. What’s it for? Steam. It’s purely to isolate the steam in a crosscut.

Anyway, let’s start at the beginning. The Keylight is an Elinchrom ELB400, with an action head firing through an 80x80cm folding softbox, at an output of 1.5 (Equivalent to an output of 18Ws). This was placed immediate frame left, and angled sharply down. It was kept fairly low, and not much higher than the camera itself.

The accent light was another ELB400 and action head, firing through a gridded standard 17cm reflector. It was placed directly in line with the camera and subject, on the far side of the table, and just out of frame (Basically, it was frame centre top). Can’t see the lightstand? You won’t. I used a dirt cheap alloy monopod as a makeshift boom, by clamping it to a lightstand. This allowed the light head to be placed centrally, without the stand being in the frame itself. The output was set to 1.0 (Equivalent to an output of 12Ws).

Now, the steam accent light. This was a speedlight set to minimum, with a small grid attached. It was sat on one of those ten-a-penny plastic stands on the table, frame right. It was set to slave1, which means it triggered as soon as the cell detected a sudden increase in light levels.

I also used a piece of card to bounce a little light into the front of the dish. (A4 silver/white card from a craft shop – pennies for a pack of twenty).

Now, the last thing I had to take into account was the ambient light. It wasn’t particularly bright in there, and I wanted a hint of the room within the shot. I used an ISO of 400, combined with a shutter speed of 1/10th sec and an aperture of f8. This allowed just enough of the ambient to show a little of the room beyond the table, as opposed toa jet black void. 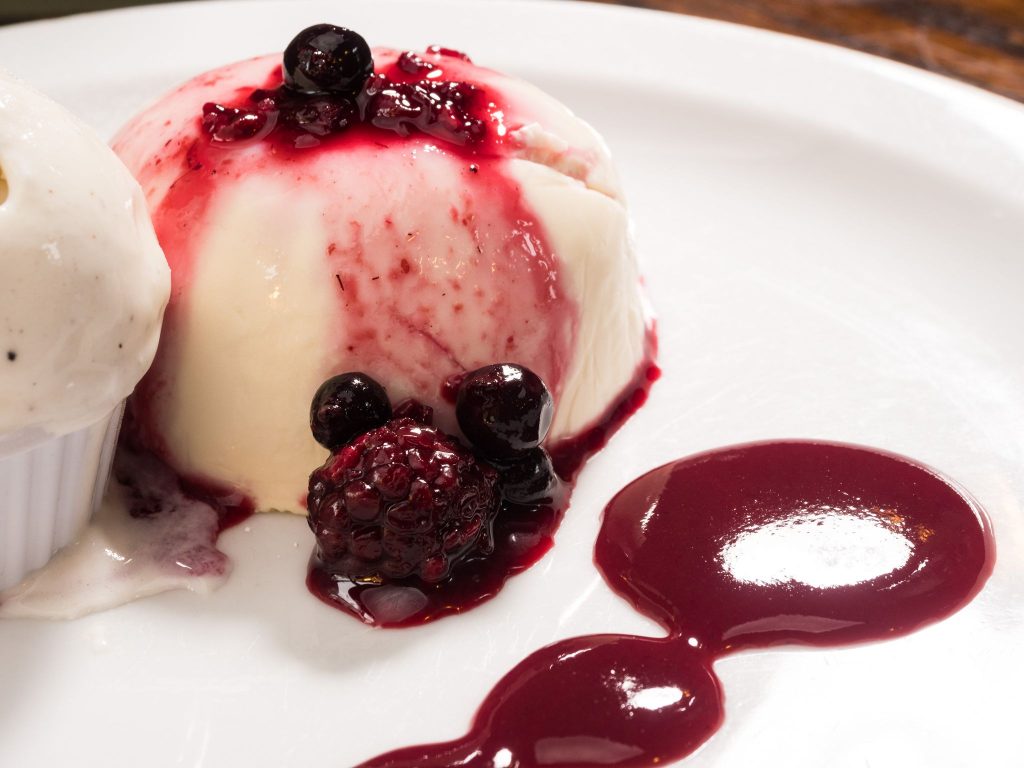 No need for the third lightsource with this one, so back to just the two.

The key light is still pretty much immediate frame left, and the same height and output as before (an output of 1.5 or 18Ws). The accent light has been moved slightly towards frame right, so as to catch the berry in front of the ice cream. Same output of 1.0 (equivalent to 12Ws).

The card (silver side) was used again, just to push a little light into the area of the ice cream between the small pot and the fruit. The wide expanse of white plate did increase the amount of light reflection, although by only a small amout, Increasing the aperture by 1/3rd of a stop from f8 to f9 pretty much controlled it. 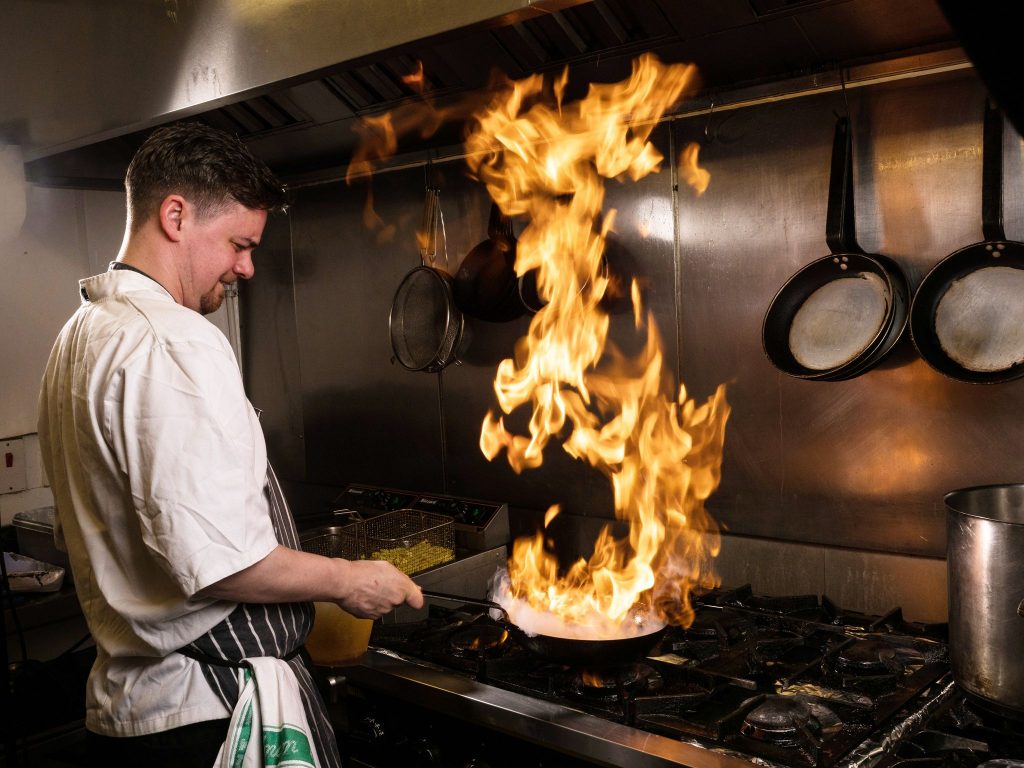 And those lifestyle images I mentioned.

This is the chef, frying hair. Well, obviously not, but you get the picture (Ooooh, a pun!)

A simple two light setup. Key and accent. You can see the accent light is frame left, and as far back as the kitchen fittings would allow. It was still a standard reflector, but the grid had been swapped out for a more forgiving 40° grid. The output was set to 2.0 (Equivalent to 25Ws).

The key light was the 80x80cm softbox, immediate frame right, and as high as the ceiling/light/fan would allow (not very!). Output was set to 3.5 (Equivalent to 75Ws).

The Emmott Arms in Colne can be found at emmottarms.co.uk