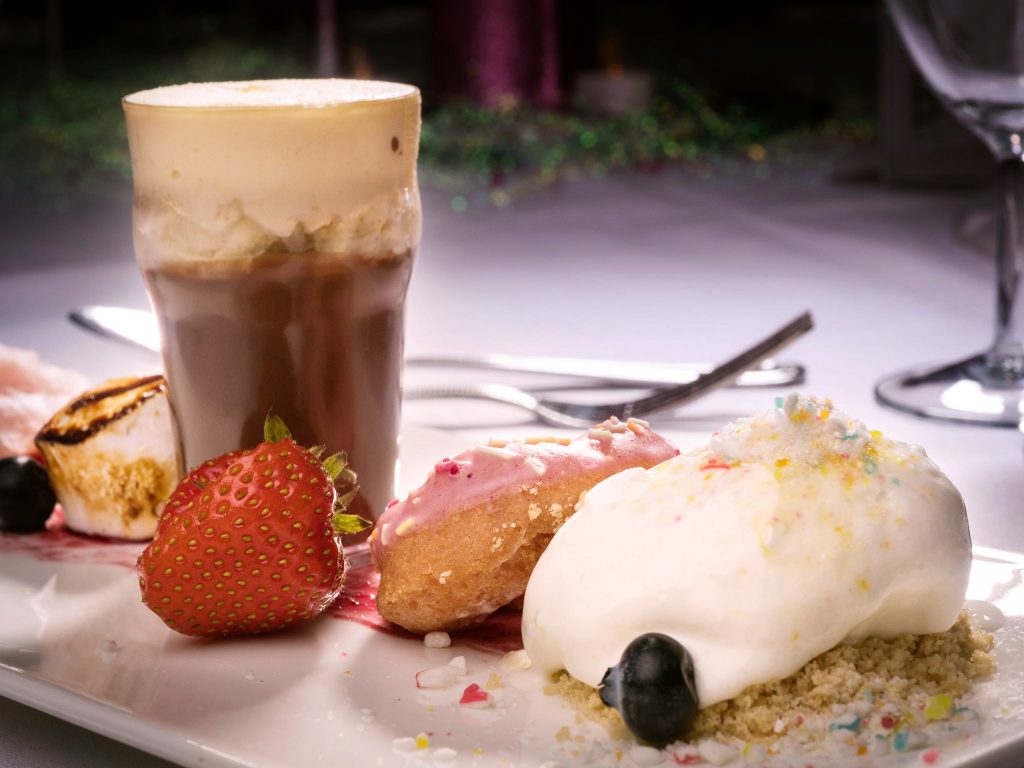 The food provided for the attendees at the Enterprise Visionary Awards is always something special. And this year, they didn’t disappoint.

Part of my remit for photographing the awards, is to photograph the food. It was slightly different this year, as there had been a number of challenges thrown at the organisers only a few days before the event. Things like the ceiling collapsing following heavy rainfall. You know, that sort of thing.

Coral Horn, who is the force behind the EVAs, took it all in her stride, and ensured all the attendees had the best possible experience. If the new room was to be smaller, the experience had to be bigger! And she certainly managed it.

On the night, because of the move and a change of access route, there were various challenges, although the attendees were completely unaware. The kitchen had to be set up in a brasserie, which slowed down the preparation a little. Not enough to impact on the meal time, but it certainly impacted on the available time for me to photograph the dishes.

I normally have an hour and a half beforehand, so it’s nicely relaxed, and I discuss with the Chef and Coral as to their requirements for the food imagery. However, this time I had literally five minutes, and the catering team were having to push hard to be ready in time.

This meant it was basically two dishes only.

The above was the first dish, which is the sweet, and was used as my lighting test. I normally ask for something cold for the test, before I start shooting the food. So shooting the sweet first seemed like a good idea, as I knew I wouldn’t have time to faff with a plate of lettuce beforehand. Of course, shooting ice cream is also pressured, because it’ll start to melt as soon as you look at it!

So with that in mind, I had to sort the lighting as quick as possible. I had an Elinchrom ELB400 on the far side, firing through an 18cm standard reflector with a grid. It was pretty much frame central, and just out of frame. I had jerry rigged a boom arm with a monopod clamped to a lightstand, ensuring the lightstand was way off frame right and out of shot. The output was set to 4.0, which is equivalent to 100Ws, and created the specular highlits seen on the top of the chocolate mouse, the doughnut icing, the ice cream and the edge of the strawberry.

My main light was provided by another ELB400, firing through a folding 80x80cm sftbox, placed immediate frame left and pretty much alongside me. It was set to fire at 4.5, which is equivalent to 150Ws. 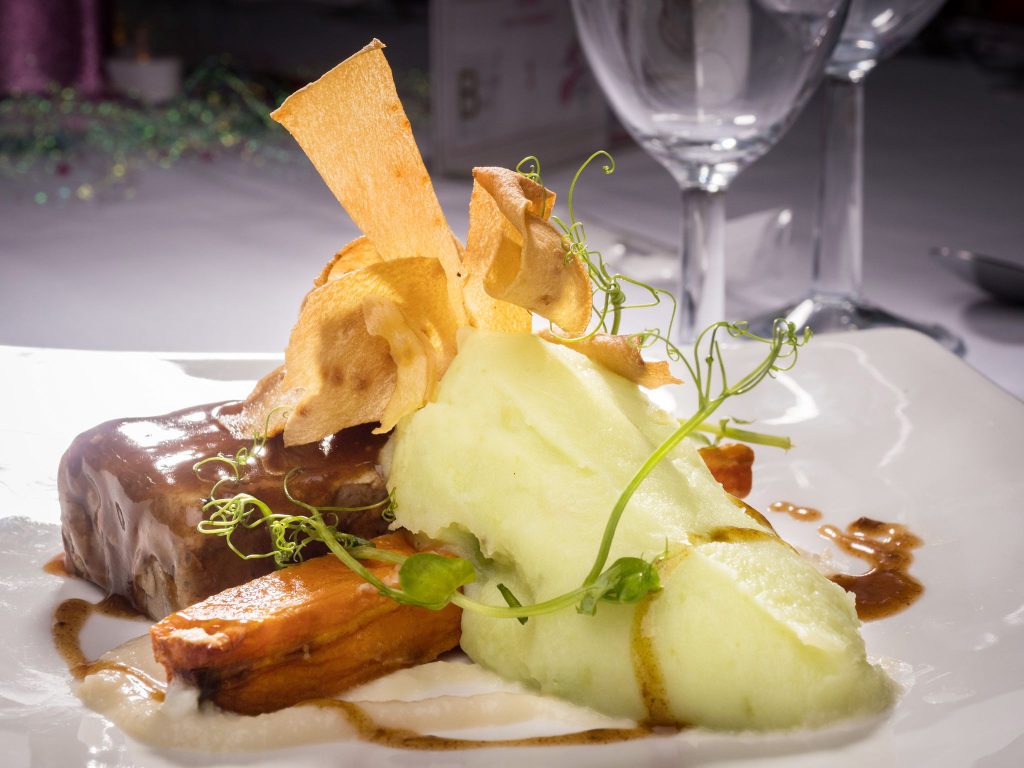 This was the second dish, and required no change to either the light settings, or the camera settings. The position of the lighting is slightly different though. The accent light has been moved further across towards frame left, as can be seen by the shadow on the potato from the curly “thing” on top. (Descriptive, I know). You will also notice I was pushing it a bit, as we are just starting to lose contrast on the meat, far frame left. 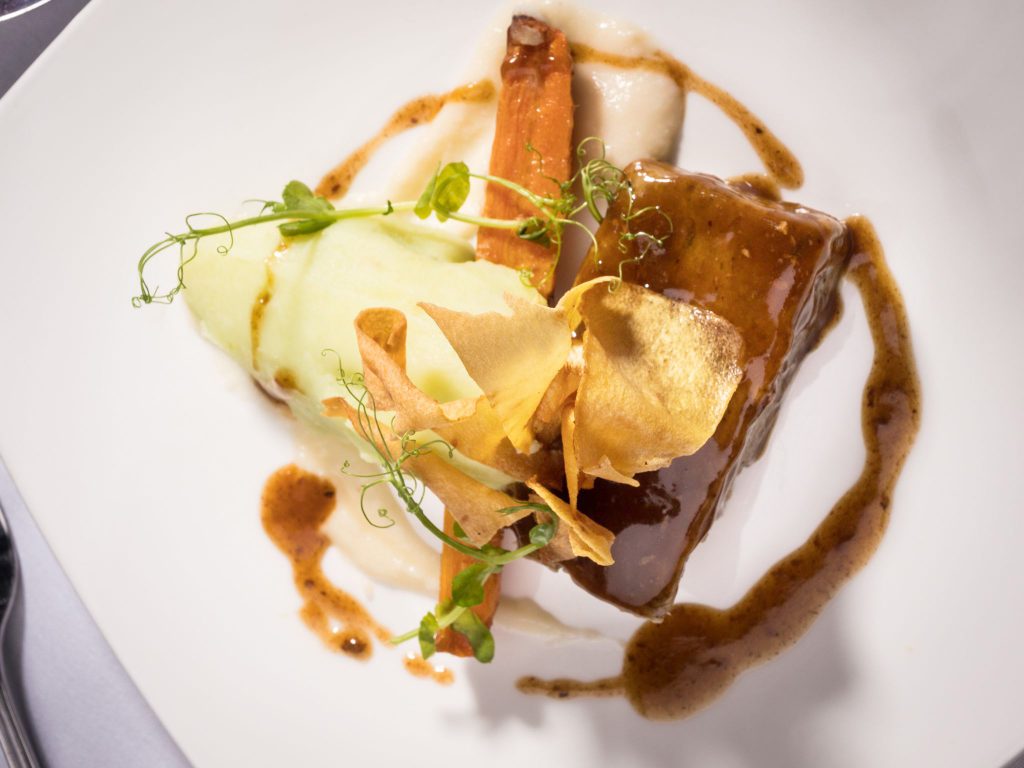 The same dish, but rotated 180°. The accent light is now frame centre top, and the keylight is immediate frame left bottom. Well, almost central frame, to be honest. No change in lighting output or settings, and the camera settings were the same.

I don’t think these are my best food images, but the timing was so restrictive and rushed, I’m happy to have gotten anything at all in that five minutes.

The Enterprise Vision Awards can be found at enterprisevisionawards.co.uk