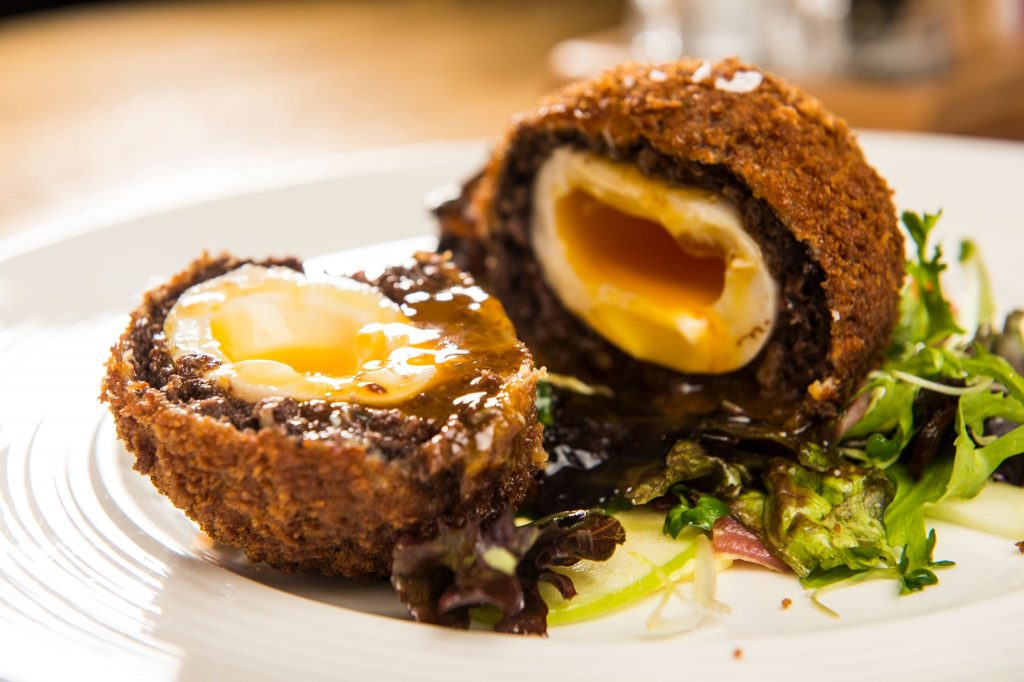 I had been contacted by the owner of the Cherry Tree in Blackrod, a rather nice restaurant with an excellent reputation regarding its food.

The brief was to keep the emphasis on the food, rather than the restaurant. The image above is one of their signature dishes, the Cherry Tree Scotch Egg, which really does have to be tried, to understand the following it has amongst diners.

Okay, I’ll stop reminiscing, and get on with the lighting.

My keylight is immediate frame right, consisting of a 360Ws location head, firing through an 80x80cm folding softbox, at a height of five feet, and angled quite steeply down towards the dish. It was firing at an output of 1/32.

My accent light was another 360Ws location head, firing through a dedicated small gridded beauty dish directly opposite me, and at a height of around four and a half feet, so only just out of frame really. The output was at 1/32 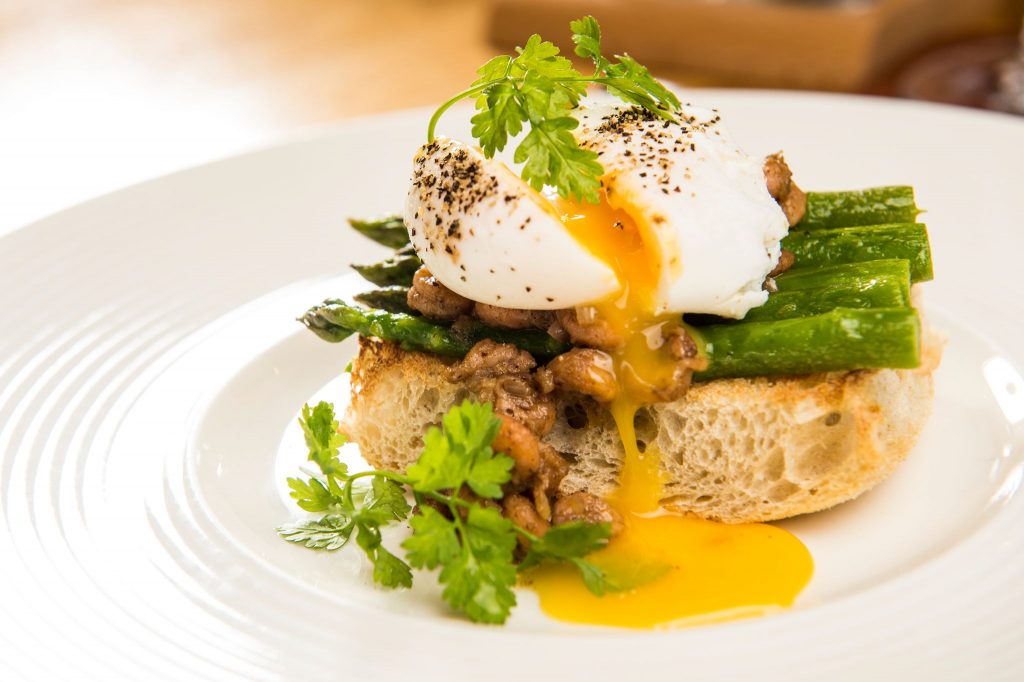 Another of their egg dishes. My keylight has now been moved to immediate frame left, with the accent light still directly opposite. The one thing I really needed to be careful of here, was blowing out the white of the egg, and the accent light need to be turned down by a stop, as I was losing some of the detail across the top of the egg. The keylight remained the same at 1/32, whilst my accent light was now turned down to 1/64. The camera settings remained unchanged. 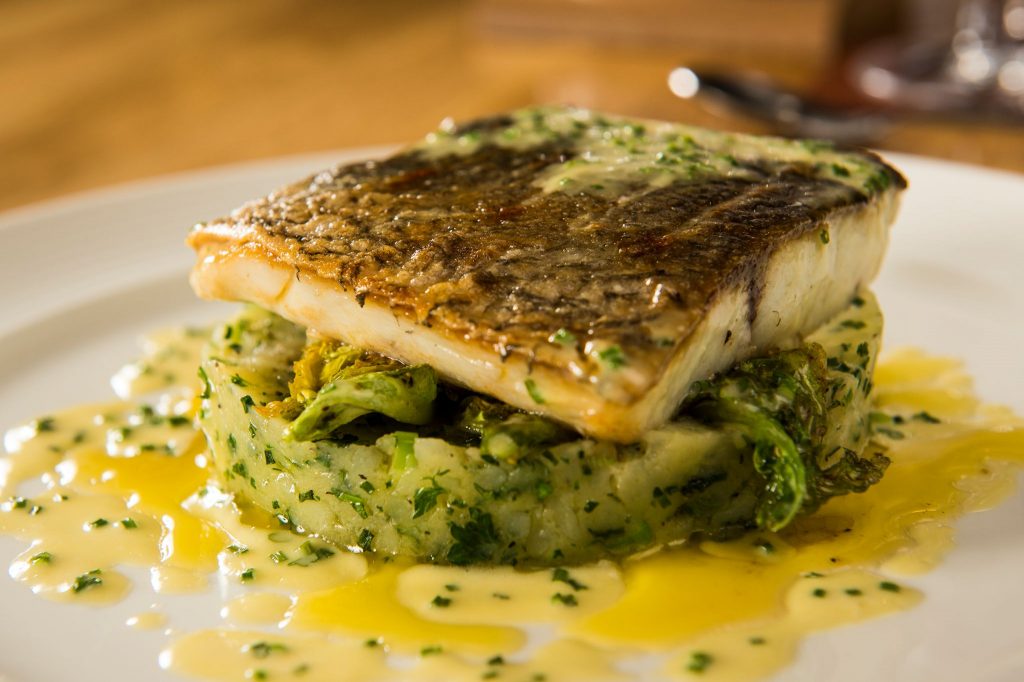 Okay, just to prove the menu isn’t all eggs, we have fish. I moved the accent light slightly frame left, as can be seen by the specular highlights on the sauce. The keylight is still immediate frame left, and I’m basically shooting from under its corner. The accent light has now been returned to 1/32 and the keylight remains the same at 1/32 also. The camera settings have changed only slightly, insofar as the shutter speed has been increased to 1/125th. If I were to be honest, I don’t recall as to why the shutter speed was increased, and there seems no indication within the image as to why I may have needed to so so. My guess is that I have probably rotated the command wheel a single click whilst handling the camera, as I really can’t see any advantage to the 1/3rd stop reduction in ambient exposure.

Now, just a couple of personal observations regarding these images. This shoot took place in the summer of 2015, before I made the move to Elinchrom, and also before I switched to Olympus equipment full time.

The first thing that struck me was the framing. I know these were all shot at the minimum focal distance for that lens. I was using a full frame system at the time. Nowadays, I’m able to frame much tighter if required. The downside of the full frame system is evident in the depth of field of these images. F8 didn’t give me a great deal to play with, to be honest, but at the time, I didn’t think anything of it. The Olympus system at F8 gives me a great deal more DOF, and allows me to get in far, far closer. I think it was the following food shoot that I took my first Olympus E-M1 to, and consequently sealed the fate of my full frame equipment.

I find it interesting how we tend to take for granted the imagery we obtain from our equipment, and it’s not until we have the opportunity to use something else that we then see potential advantages for our work, and therefore our clients.

As for the lighting, it’s a little more difficult to quantify the advantages of my change to Elinchrom, and the main advantages are not something that can be deducted from these images. It’s more about workflow on location, increased speed of deployment and therefore increased profitability. The one thing that did strike me very quickly when I switched, was the colour temperature. Or to be more exact, the colour consistency. Previously, I had used IGBT based location lights, whereas Elinchrom are voltage controlled. If using a couple of IGBT lights at differing outputs, I could sometimes see a slight shift to blue in the lower output head. Most times I ignored it. But occasionally, particularly with colour critical products, I had to pig about in post to sort it out. That stopped with the switch to Elinchrom.

Funny how we read about such things, but until they impact on our own productivity and quality of service, we don’t really appreciate it.

The Cherry Tree can be found at : cherrytreeblackrod.com