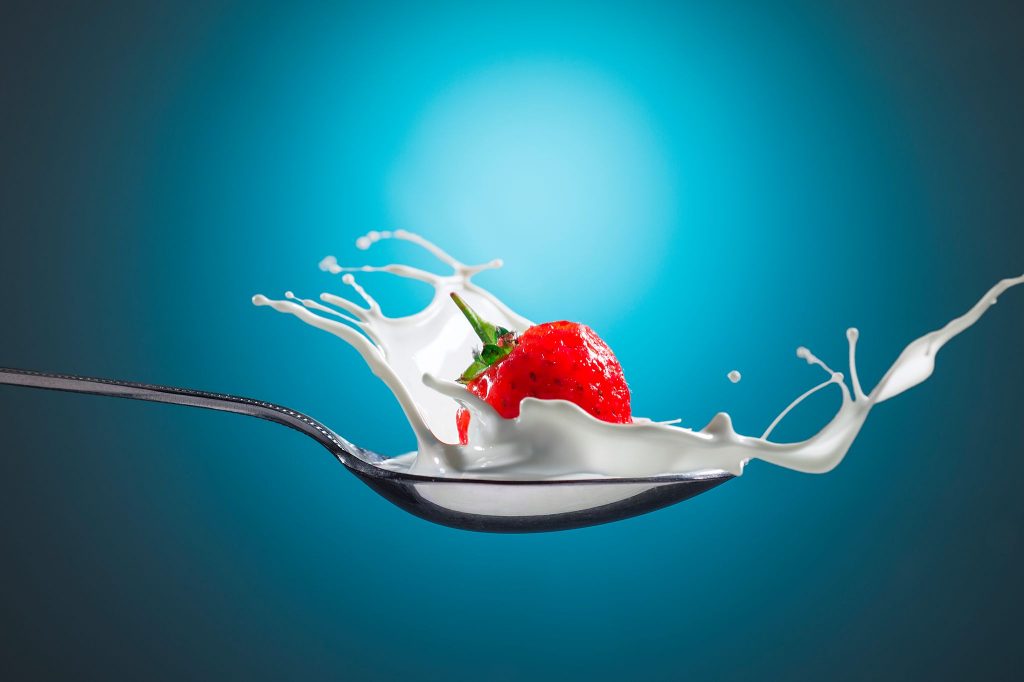 This image was developed for use with the food photography side of the business and has become quite widely recognised since we started using it a few years ago.

The spoon was clamped to a lightstand out of frame to the left, ensuring there was a stable target for the strawberry. (Note: By strawberry, I suppose I should possibly use the plural rather than singular, as we went through a full pullet).

Let’s start with the background, which is a large sheet of diffusion paper suspended by a bar. On the other side of a the paper is a Godox Witstro 360, firing through a standard reflector with a blue gel fitted. The head was carefully (meaning trial and error) set to be on a level with the camera and spoon. As you know, the characteristics of the light from a standard reflector means it’s strongest centrally and fades due to fall off around the periphery. The white area the other side of the splash is caused by mild over exposure from the light, which becomes progressively bluer towards the edge of the frame, eventually heading towards the underexposed grey of the corners.

There are two accent lights, one either side. Both are Witstro 360s with their dedicated beauty dishes fitted, complete with grids. Each one are a little further back than the spoon, and slightly higher. Both were firing at 1/16th output.

The main light is a fourth Witstro 360 firing through an 80×80 folding softbox, just to my left, at a similar height to the spoon (you can make out the bottom of the softbox reflected in the underside of the spoon). It was firing at 1/32nd

Notice the higher ISO, whilst the Witstros are firing at quite a low level. Why not just up their output?

The Witstros utilise IGBT circuitry, the same found in speedlights etc. As you turn down the power, the light output is physically cut off, reducing both the flash duration and the recycle time.

Standard studio heads are not fitted with IGBT circuitry, and turning down the power actually increases the flash duration, often exhibited by the blurring of hands in children as they tear around the studio! The short flash duration brought about by the IGBT circuitry freezes the motion of the milk.

An advantage to having reduced recycle time meant that I could use high-speed drive and shoot at 10 frames per second, increasing my chances of getting the moment of impact, although you wouldn’t have thought so if you had seen the milk and damaged strawberries littering the studio floor by the time we had finished.

Just use cheap speedlights for the same effect. You may need to increase your ISO further, or move your speedlights nearer.

Worth bearing in mind:

Plastic sheet. A big one!