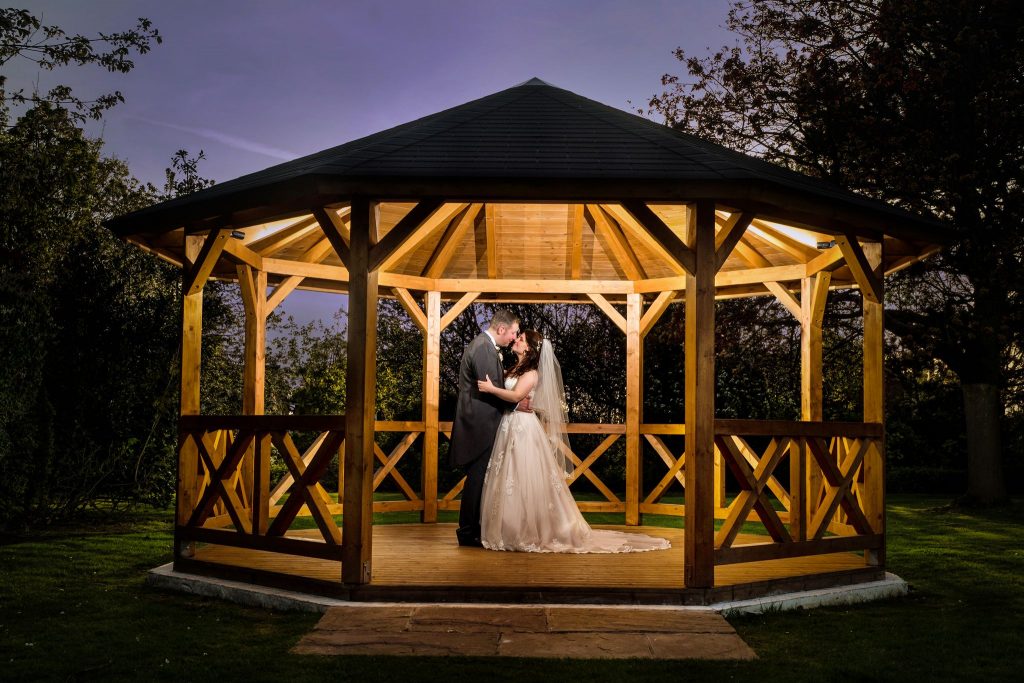 This was one of those settings that on the face of it, should have been great. Farington Lodge Hotel had recently built this gazebo at the far end of their grounds, with electricity supplied with the intention of some lighting to provide a nice romantic ambience to the setting.

And like many plans, I kinda hit it in the middle. The building work is complete, but the electricity wasn’t sorted just yet.

So, this would actually give me full control over the look I wanted, and that’s an awful lot more fun, believe me.

I had a careful look around the structure, looking at ways to hide the lighting heads. The Elinchrom ELB400 units are tiny, but I’d also need to hide the modifier and battery. And looking at the open structure, I realised it was going to be difficult. So, back to the camera bag to break out the speedlights.

Looking at the roof of the structure, I felt I could throw a good amount up into the ceiling space to have it light at least the top two thirds of our couple. The bonus here, is the fact the wooden ceiling space would also warm the light nicely, adding to the ambience of the shot.

Now, talking of ambience, I wanted to reduce the effect of the ambient lighting. The sun was setting, but there was still a good half hour before it hit the horizon, and the sky was going to blow out if I wasn’t careful.

I dropped my ISO to 64 and raised my shutter speed to 1/250th, therefore underexposing by around 2 and 2/3rd stops, which is a fair drop, and allowed me to get some useful colour into the sky.

All I needed to do now was light the interior, so I cold at least see my subjects, as they had pretty much disappeared after making the changes for the ambient.

I placed a speedlight either side of the door aperture, up above the supporting ledge. No modifiers were used, just bare speedlights. The heads were angled slightly upward to fill the ceiling space, and hopefully create some sort of bounce back to the couple.

Another two were placed a little further out, and either side of the two already set up. In fact, if you look carefully, (okay, you don’t really need tolook that carefully, as it’s pretty obvious) you can see the two speedlights I’ve just mentioned. They were again angled to fire up into the ceiling space, and without modifiers.

All four speedlights were firing at ¼ output.

Whilst I have any amount of lighting kit at hand, I always have half a dozen speedlights to hand. Incredibly small and easy to hide. They’re more than just a backup.

Farington Lodge is a wonderful wedding venue, and can be found here.

Their staff are incredibly attentive, and nothing is too much effort to ensure the bride and groom have the best day possible.

my wedding work can be found at weddingsbymichael.co.uk