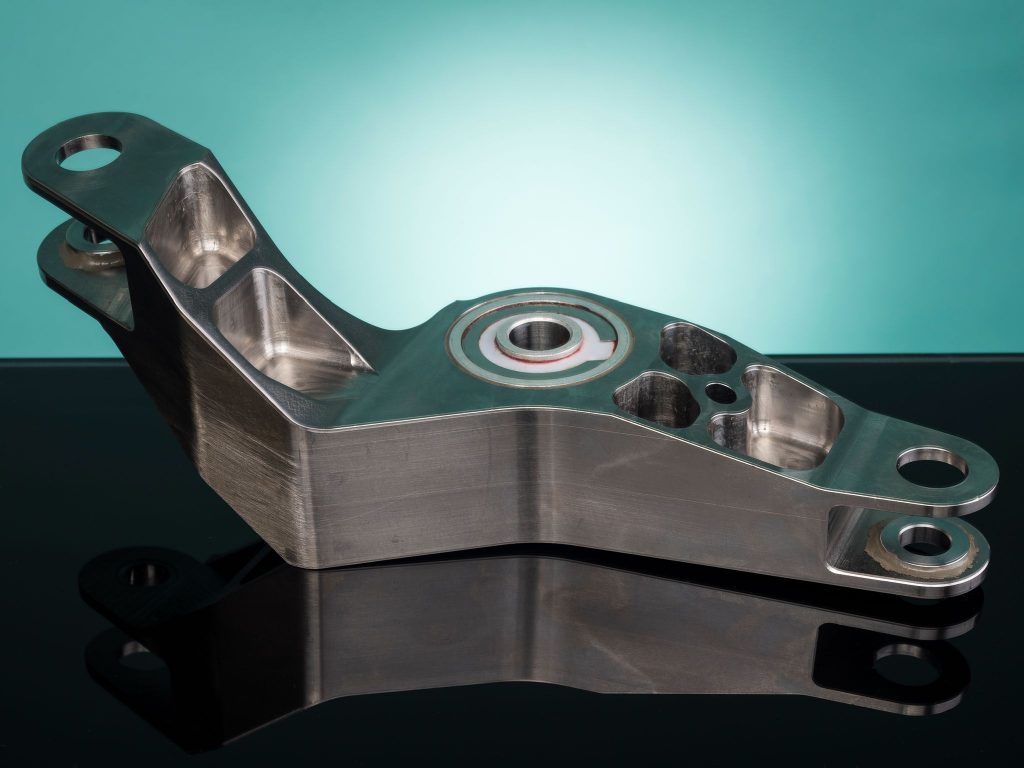 In a previous post, I discussed the problems of triggering studio flash when using the E-M1 mkII in HiRes mode, and the fact the Elinchrom HS trigger actually worked fine. This image is part of the high resolution portfolio for a client, and the reason I needed to find a solution to the issue of non firing studio heads.

The client, BCW Engineering in Burnley, manufactures specialist aluminium parts for cars and aircraft, and whilst their products will be shown on their website, they are also exhibiting at a trade show later this year, where extremely large images would be used on their stand. The 80Mp raw files from the Olympus E-M1 is absolutely ideal for this.

The images were also for use for their new website, currently being developed by D & M Creative.

The image above is the converse of the usual product shot on white, and allows far more input from me for the final image. An “on white” image was also shot, and can be seen below. However. Lets deal with the coloured image first. The product is an intricate aluminium casting for a car suspension part, and my main area of interest is to show the shape, form and texture of the product. I placed it on a piece of black plastic to provide a little reflection, as well as a nice deep black as the support. Four feet beyond the edge of the “table” (A wooden pallet, sat atop two wooden horses), I have an aqua blue paper backdrop. I wasn’t interested in lighting the whole backdrop, as it would no doubt receive some illumination from the spill of the other lights. However, I did want to provide a halo of light that would draw they eye to the product. To do this, I had a 200Ws head on a low floor stand below the table. It was set to fire at 1/8th though a standard reflector. I also fitted a 40° grid to restrict the light from illuminating far beyond the framed area.

Four heads in total, and the positioning and height etc. is easiest understood from the BTS. 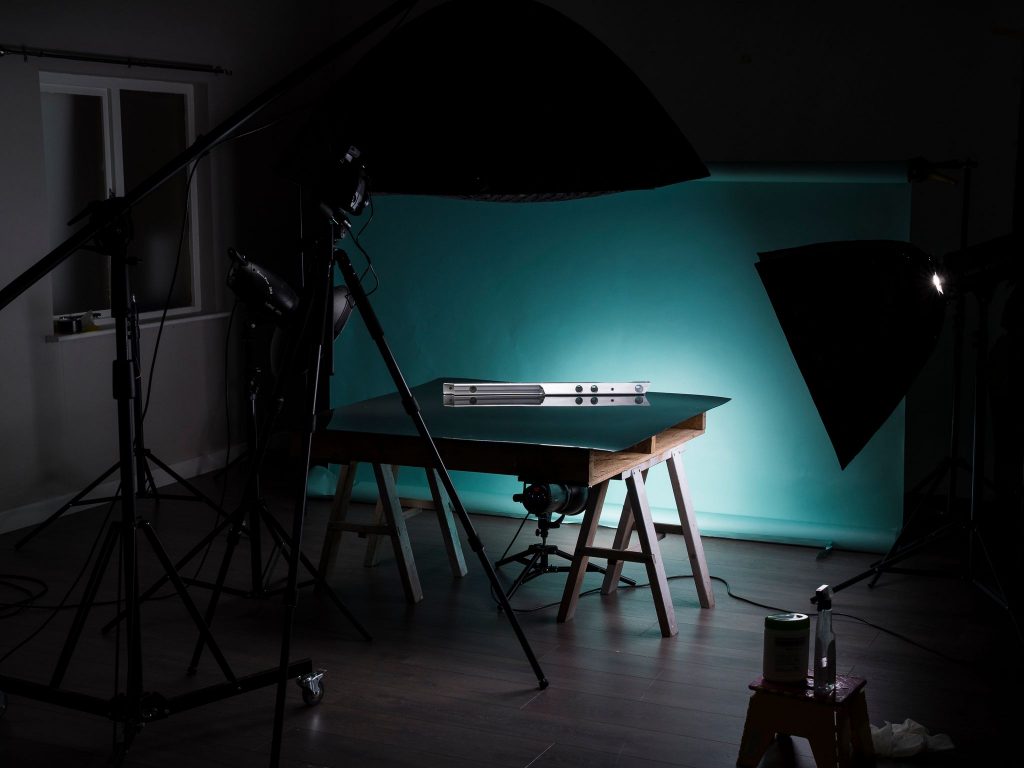 The E-M1 mkII takes several i mages, and then interpolates them to create the 80Mp Raw file. Obviously, you don’t see the remarkable detail obtained here, because the image is resized for the blog. There are download links to the Raw and full jpeg in the blog post mentioned at the top of the page.

For completeness, I’ve included the “On White” image, which I find lacks the attraction of the coloured background image, but that might be just me.

The three main lights (Key and two accents) are in the same, or at least very similar positions and settings. The only light no longer required is the background light, as it’s a white “scoop” rather than a separate backdrop, and close enough to fully illuminated by the overhead main light.

In fact, you can see the identical positioning of the heads in the BTS below. 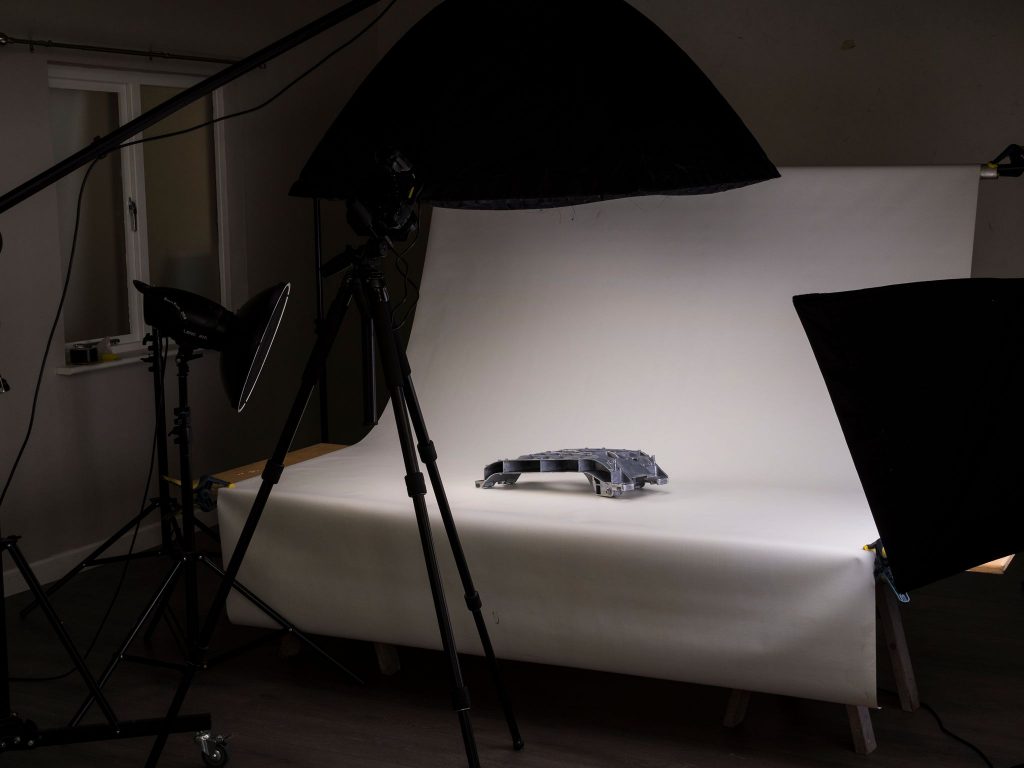 Photographing on white isn’t particularly difficult, although easy to get wrong if you over light the white background, and then you simply lose contrast on your subject. I don’t light the background more than one full stop above the subject. In this case, the background is actually being lit by the same overhead and accents as the subject, and was to be cut out out anyway.
The coloured background stuff is always far more interesting to look at. And dare I say it, far more interesting to create.

To see more of the engineering photography, visit the client’s website, BCW Manufacturing Group. All images on the site were taken over a period of a week. This also provided them with a large catalogue of images for use at Exhibitions and for marketing purposes. The high resolution images were used for wall sized prints at the Expos.