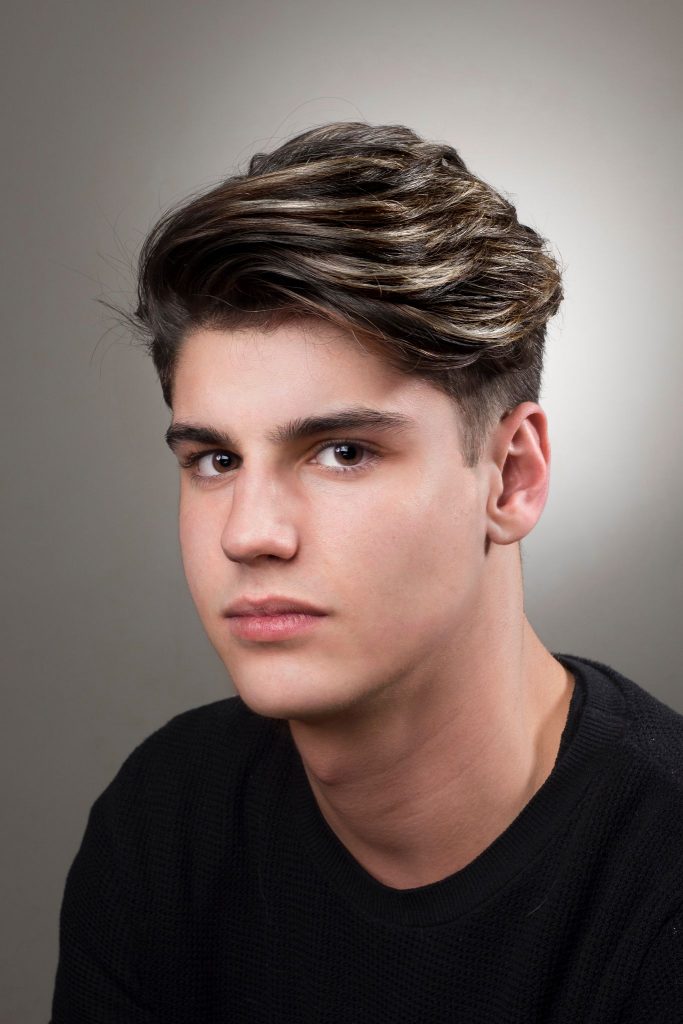 This isn’t a headshot, or even a portrait. It’s actually a product shot. Well, kinda.

The product? Actually, it’s the hair cut. This image is to be used to enter a national hair styling competition. All the attention is on the hair, not the model. And whilst at first glance it looks a fairly straightforward image, it needed four heads to create the texture and shape I needed. Ok, three if you don’t count the backlight for the wall.

Frame left, I had an Elinchrom ELB400 firing through a 18cm reflector, turned right down to 0.5. This was providing a flick of light under his eyebrows and under his quiff. I think it may have needed a little more for his quiff, but I was in real danger of blowing out his skin tones on his cheek and forehead.

Immediately above the camera is another ELB400 firing through a 80x80cm folding softbox at an output of 2.5. This was my key light, providing the general lighting for the subjects face.

Frame right was my main accent and texture light for the hair. This was another ELB400 firing at 2.0 though a gridded 18cm standard reflector. It’s above the model’s head height, and angled down to cut across his hair, therefore creating the texture. You can see the angle from the shadow of his earlobe.

And as I mentioned earlier, there’s a fourth ELB400 firing through another 18cm reflector quite close to the wall, causing quite a quick falloff and allowing the wall to go to grey beyond the lit area. It was set to 0.5

The lighting itself is quite simple, it was more the accuracy of the hair light and the subtlety of the frame left fill light that caused the most piggin’ about.