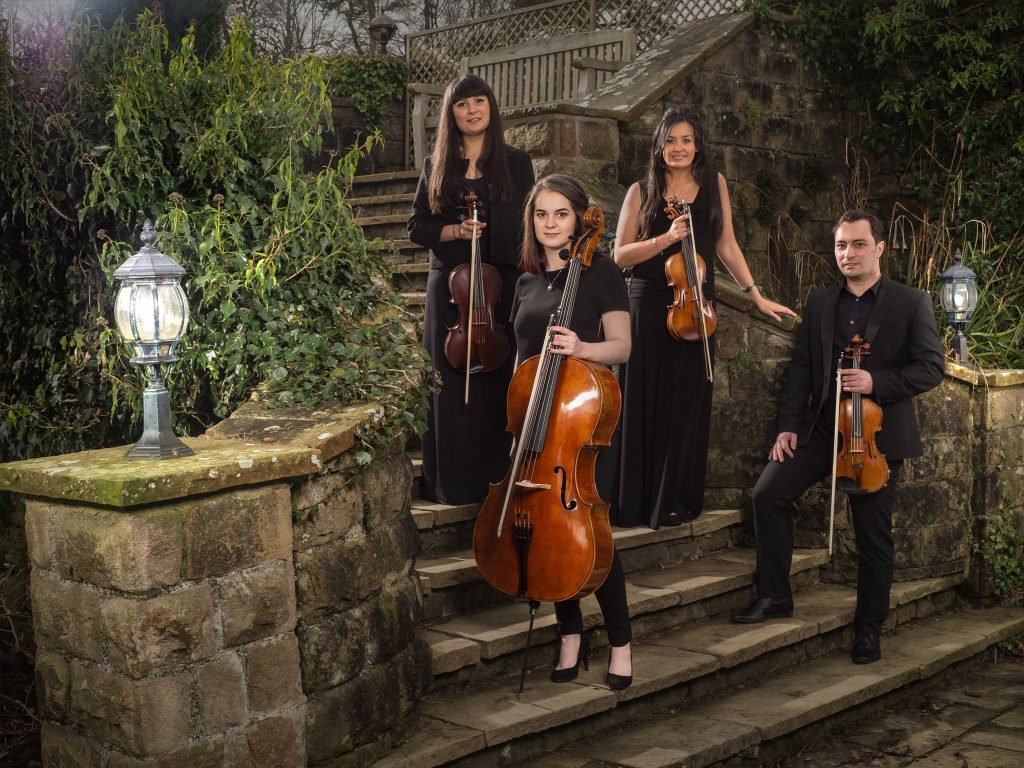 This was part of a shoot for the Northern String Quartet, based in Manchester, but photographed at the outstanding Eaves Hall in West Bradford, Clitheroe.
The Images are to be used for their website and social media, and are basically PR and marketing images. I’d already made use of the interior of Eaves Hall, and now wanted something a little different. Hence the move to outside.

Immediate frame left, I have an Elinchrom ELB400 firing through a folding 80x80cm softbox at head height. This provided the texture to the nearest stone pillar and wall. Also, due to the distance to the group, it acted as a main light to the overall group. It was firing at an output of 5.0.

You may have noticed the slight hint of flare top left corner. That’s coming from another ELB400 unit firing through a high intensity reflector. If I had used a grid to reduce the flare, it would have restricted the cone of light to the point that it wouldn’t have covered the group fully. Also, this light was also providing highlights to some of the surrounding stonework and shrubbery. It was at the top of the steps, where there’s a fairly sizeable open area. It was firing at an output of 4.0.

Frame right, and placed in the border with the bushes, was a third ELB400, firing through a honeycombed 30x140cm stripbox at an output of 3.0. This was too provide an accent light to Nikolas’ dark suit, and also give further shape and texture to the far wall.

Eaves Hall is a wonderful place, especially as a wedding venue. They can be found at http://www.eaveshall.co.uk/

The Northern String Quartet have a very wide and varied repertoire, and can be found at http://www.northernstringquartet.com/