Wedding Photography at The Holiday Inn in Bolton 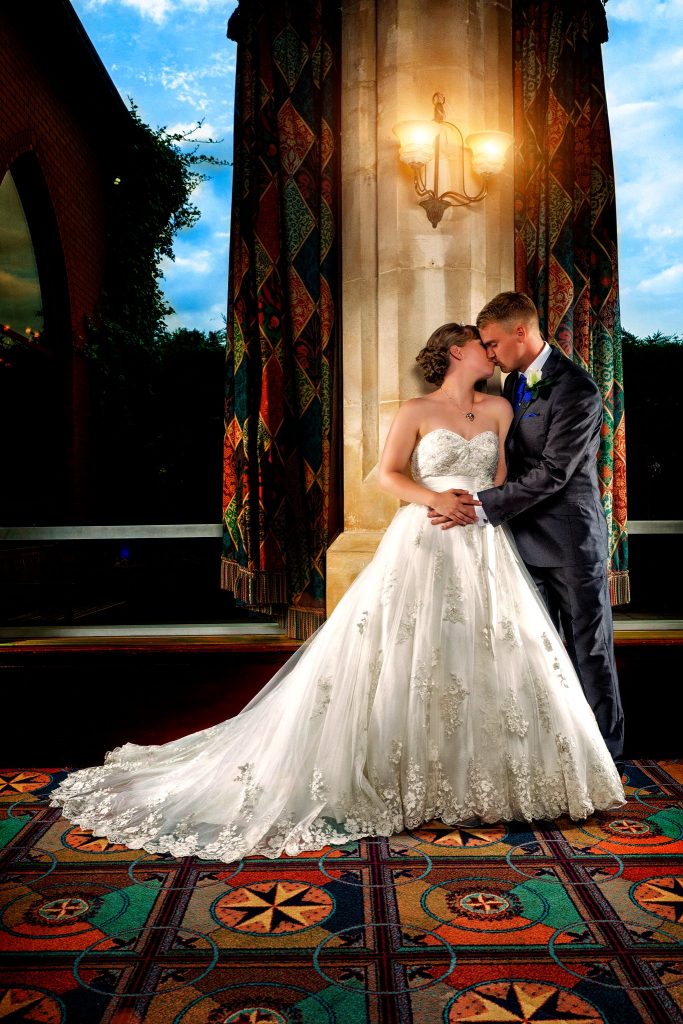 All wedding venues have good and bad points. Some make you work harder as photographer, whilst others can cause you to become complacent. The Holiday Inn in Bolton is a venue that makes a photographer earn his money.

At first glance, there’s little opportunity available outside. The inside can be restrictive in available settings, although there is the rather photogenic converted church at one end of the building. So, not a great place then?

The staff are incredibly helpful, to the point you just know they are making things difficult for themselves, to make it easy for you. Not only that, but take your blinkers off and go for a stroll. OK, there’s a front lawn that goes straight onto the main road. So don’t shoot towards the road, shoot towards the next door building because the tree and hedges hide the brickwork and make a really nice seasonal backdrop. It’s raining? Don’t be a wuss! I love working in the rain, because it’s an opportunity to get something unique (See the bridal rain portrait). Anyway, with a little thought, you can get something indoors too. There’s an interesting, albeit very short, staircase, which makes for a nice overhead shot of the bride and groom. The stairs are off from reception, and lead down to the underground car park. Oh yeah, an underground car park that would make a really interesting grungy urban setting for the right couple.

Sorry, I kinda got carried away. I just find it irksome when I’m told by a photographer they don’t like a venue because there’s nowhere to shoot. Open your eyes.

Right, I’ll get off my soapbox and return to this particular image.

The Cloisters is actually a converted 16th century church, and yes, it’s as nice as it sounds. It can look large and empty, but there are a lot of features that just beg to be utilised in some way. Features such as the large columns between the windows, as seen above. I love the architecture and the way the outside light can be controlled to add ambience to the image, along with the lights mounted on the columns. I placed an ELB400 action head mated to a honeycombed stripbox frame left. It was about chest height to maximise the coverage of the dress. A second ELB400 action head was placed frame right, and again coupled to another honeycombed stripbox. The left accent light was firing at 3.0, so as not to burn out any detail on dress, and give enough contrast across the folds to create depth and texture. Whereas the frame right accent light was set to fire at 3.5. It was nearer to our groom, and his suit was darker and therefore needed a little more light to lift the texture and shape etc.

The key light is a third ELB400 action head firing through an 8×80 quickfold type softbox. (The type that can take your nose off the very first time you unfold it after delivery. And yes, it hurts!). The softbox was at maximum height on the stand, which was about 6’4″ and angled down towards the brides waist. I wanted the light to pool from their heads towards the ground, with enough spill to provide detail to the carpet, but without it going too far up the column and killing the ambient from the lights further up the column. It was set to fire at 4.0.

I had to pay attention to the ambient light outside. I needed to underexpose enough to keep detail in the sky, and send the courtyard into silhouette. The courtyard isn’t actually a bad setting to use, and I did so after this image. However, once again you choose your area and angles to get the most out of it, and from the inside, it doesn’t put the hotel in the best possible light, so to speak. Besides, putting it into silhouette keeps the attention on our bride and groom. 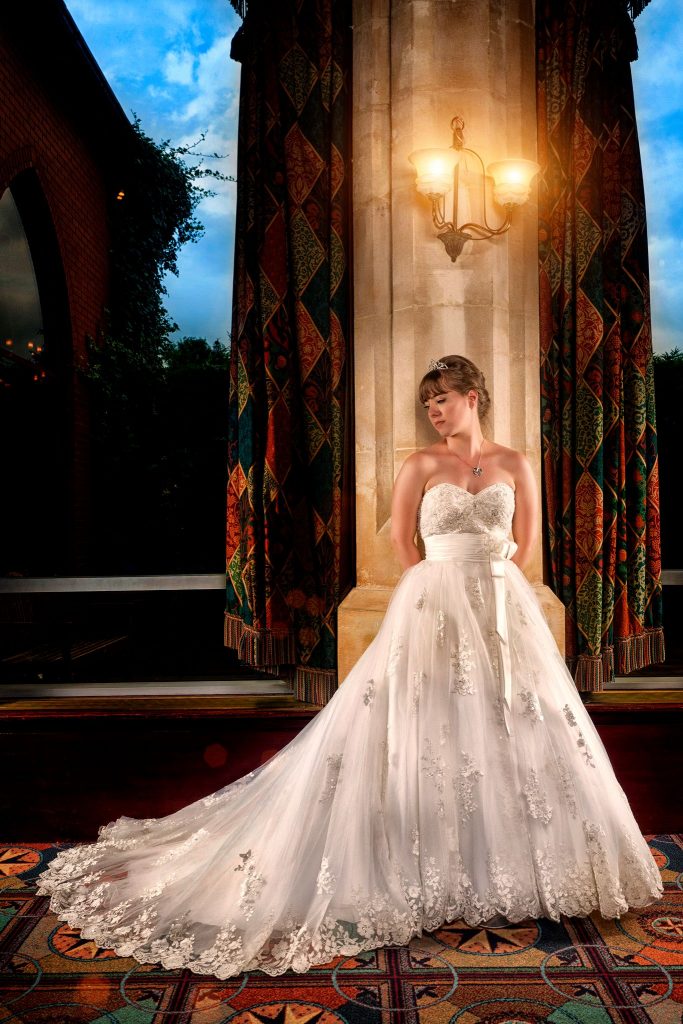 This is the same lighting setup, and you can see how the accent light frame right is actually stronger, bearing in mind what I mentioned above with regards to the groom’s suit.

Now, I mentioned the courtyard. Yes, you have to choose your angles and lighting with a bit of thought. It’s basically rectangular in shape, with one brick wall, a wall of glass that looks into the Cloisters, and a third wall that has the doorway to some dark and dingy place for storage under the hotel. However, the final wall has a really nice hedge and bushes, and you can’t really go wrong with that. 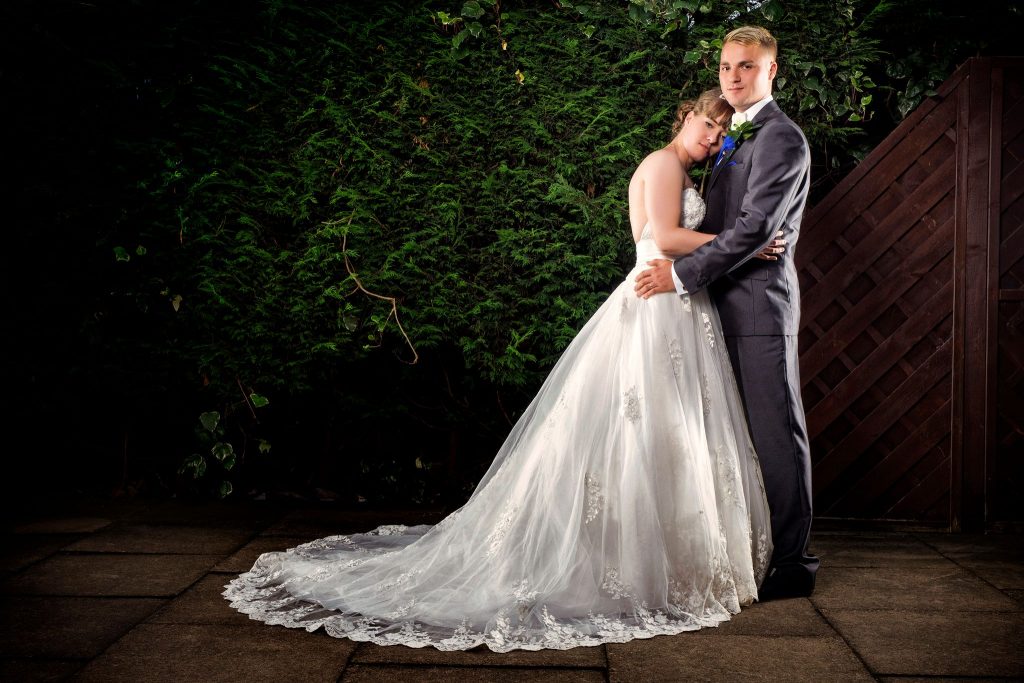 Very similar in setup to the interior shot, although I want the accent light to scrape across the bushes and hedge behind the couple to add texture. The same goes for the fence on the right of the frame. Talking about frame right, it’s quite visible how the accent light is stronger here, and how it helps define the groom’s suit trousers, jacket and his cheek. On the other hand, the accent light from frame left is not as intense, so as not to verlight the gown. Not to mention our bride has a very delicate and pale complexion.

Accent light frame left was again the ELB400 through a honeycombed stripbox at an output of 4.0. Even though the amount of accent seen on our bride is similar to the top image, the light source is a little further away from her. The Accent light frame right is the second ELB400 through another honeycombed stripbox (yes, I like my stripboxes!) and firing at an output of 3.5.

The key light was the ever faithful 80×80 quickfold softbox coupled to another ELB400 and firing at an output of four4.5 due being marginally further away than in the first image. 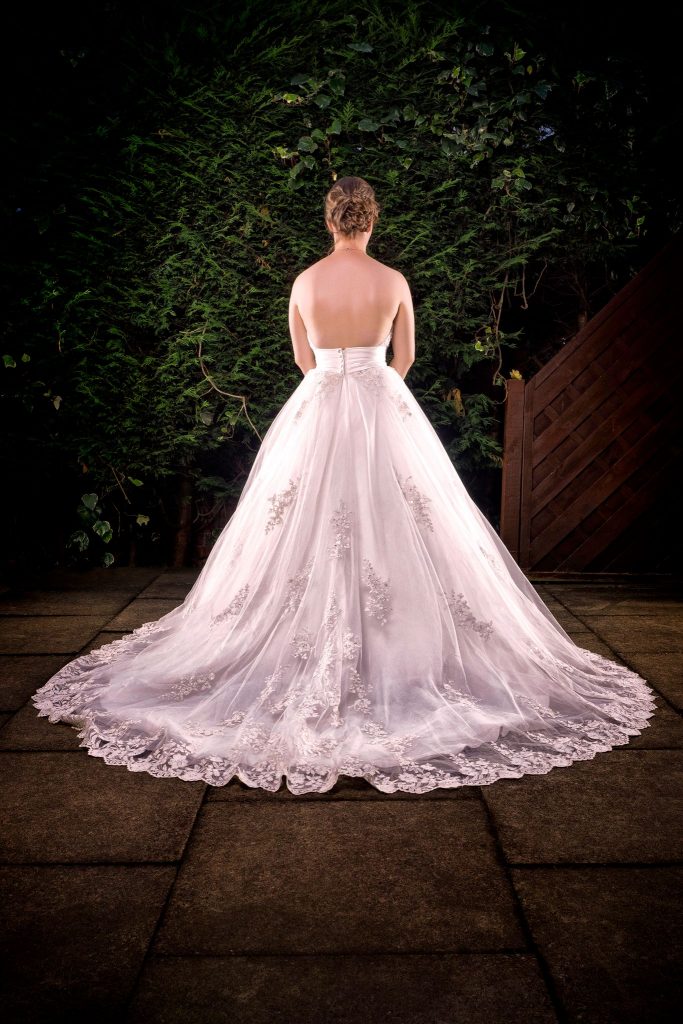 This final image was the same location. I simply moved the frame left accent a little nearer, as seen by he increase light on her shoulder. I also moved the key light a little closer and increased the aperture.

Honestly, if you are bride or groom that happened to come across this writeup because you were searching for a wedding venue in Bolton, go take a look at the holiday inn, seriously.

Very nice folks, and the venue has more to offer than you may think.