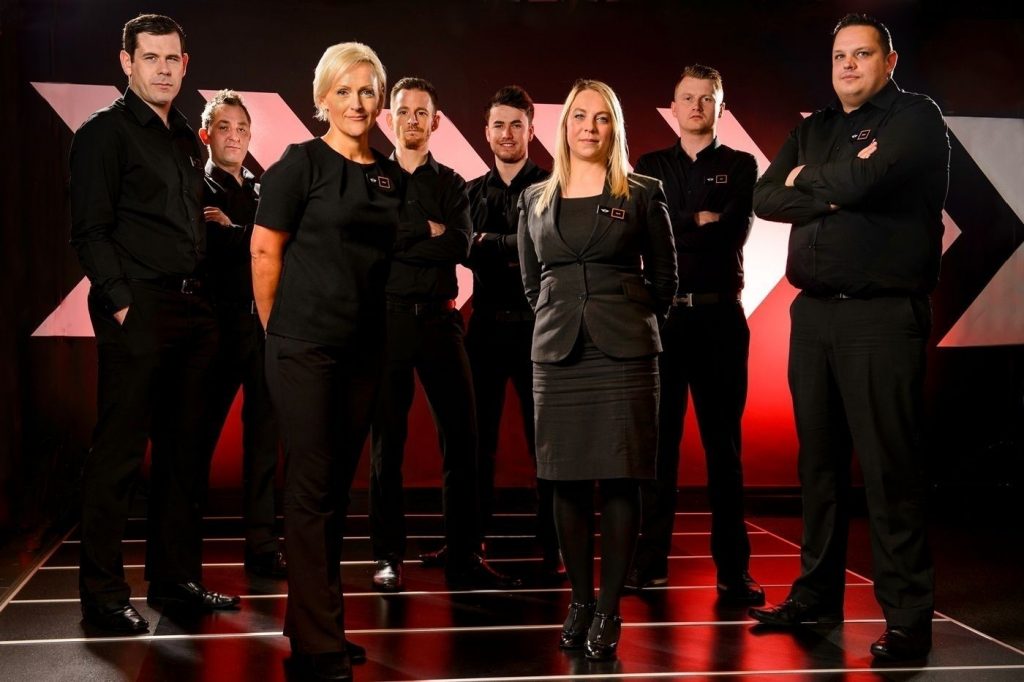 This was part of a series of team shots for a BMW Mini dealership.

The interior of the Mini showroom had an interesting chevron pattern on the wall, with the majority of the décor being black. I wanted to make use of the chevron in the background, but also create a little more atmosphere to the image.

I used two Godox Witstro 180Ws behind the group, firing through standard reflectors fitted with a red gel, and at waist height with a bias towards the ground. This helped to create the red glow on the lower part of the wall, which faded to black at the top, but also reflected nicely on the dark glossy floor. Output on both was set to 1/8th

Frame right, and against the wall, was a Witstro 360Ws at 1/8th firing through a gridded Beauty Dish. It was raised as high as the ceiling would allow, and aimed diagonally across the group towards the lower left corner of the frame, providing the accent light to the figures on the right of the frame.

A second Witstro 360Ws was placed as far into the corner as possible, frame left, and up against the wall. This was also raised as high as possible, and fired through another gridded Beauty Dish, aiming downward towards the lower right corner of the frame. This provided the accent light for those on the left of the group. Again, the output was set to 1/8th

The main, or key light, was just to my left. Another Witstro 360Ws, firing through a 80x80cm folding softbox, raised to just above head height, and firing at ¼ output.

There wasn’t a brief for this image as such, but the site manager wanted something “interesting” for the “Meet the team!” section of the website. The image was used there, and also enlarged to be used for a 9’x6′ billboard on the side of the dealership, which had originally been planned for a text sales slogan.

This was actually an update of a similar image I had taken for the team a few years earlier.