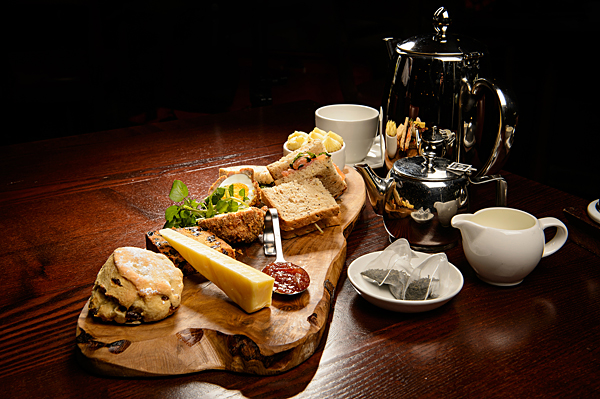 There’s a number of hotels I photograph food for, the Macdonald Tickled Trout is one of them. This was part of a number of images for an advertising campaign, photographed within their recently refurbished restaurant.

After talking to Robin Ford, the General Manager, we decided on a fairly low key, intimate feel to the images, which were to advertise their afternoon tea menu. The low key bit was straightforward enough, as I just needed sufficient shutter speed and a low enough ISO to cut the ambient light down to a point where it added little or nothing to the image. The main point here would be to use sufficient flash to require a fairly small aperture, and have the heads close enough to the food so as to dramatically reduce the light fall off over distance (remember your inverse square law?), which would avoid any spillage to the surrounding furniture, and therefore contaminating the image with unwanted background clutter.

It takes longer to write than actually do 🙁

I tend to work with a two head system when photographing food. It’s not a hard and fast rule, just something that tends to work for me. Additional fill can be sourced with an appropriate reflector, although I have to admit, there have been times I’ve cringed as I’ve wrestled with a 32” reflector because I forgot to take anything smaller. Cringe? Yes. Particularly when I’m working in full view of a full restaurant, and you can guarantee the guy on the next table is giving a running commentary to his wife as to what I’m doing and what the results are likely to be like.

It does have it’s up side. Like the time I overheard one gentleman explain that the flashing lights were used to keep the food warm for the long exposure needed in the dimly lit restaurant.

Where was I? Oh yes, the two head system.

My main light was a Lencarta 360 Atom firing through a folding 80x80cm softbox from almost directly above the food. It was tilted down as far as the lightstand would allow, which meant it was still effectively illuminating the front of the dish. This provided the overall light,and was firing at 1/32nd output. It was probably just over a foot above the food and just out of frame.

The second light is actually the most important, as this is what is providing those all so important specular highlights. It was a second Atom 360 on the far side of the (small) table, a little above the height of the table surface and firing directly towards the camera but aimed downward towards the food. It was firing through the dedicated beauty dish with a grid fitted, which reduced the risk of flare, and also ensure the light was tightly controlled with regards to where it fell and illuminated.

This is the same platter as the first image, just rotate slightly for the highlights to show correctly from beauty dish. Seeing as it was to be a much closer image. Rotating the dish was quicker than moving the lights. All lighting was exactly the same with regards to position and output, it was only the food that was moved.

Same lights, although the main lights was angled from right and also changed so as it wasn’t as near vertical as earlier. The accent light is also slightly moved around towards the left of the frame, so as to skim across the scones, the cakes and also the pastry edge. The output from the main light was reduced slightly as it was now nearer to the food due to the elevated plate, which meant it was now at 1/64th output. The accent light remained at the same distance, although it required raising to correctly match the height of the food.

The Macdonald Tickled Trout is alongside the M6 at junction 31