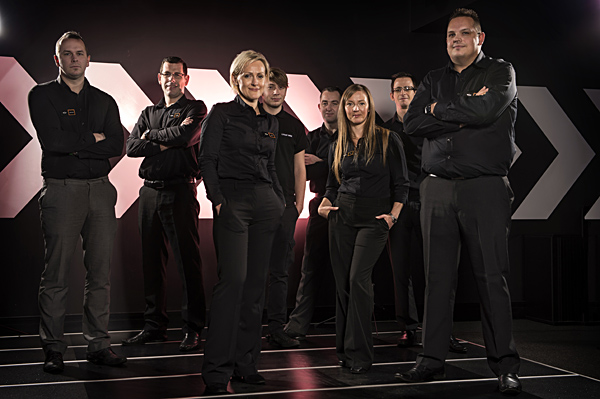 This particular assignment was to provide new headshots for their website’s “meet the team” page. Whilst there, Matt asked for a group shot to be possibly used with their social media outlets. After a couple of standard type group images, I suggested something a little different, which is basically what “Mini” is all about.

The above image is taken in a corner of their showroom, where normally there is a car displayed. As it was a fairly small space, the Lencarta Atoms came into their own here. The rear wall was lit with an Atom 180 using a standard reflector and a red gel. It was placed on a stand at about waist height with an output of 1/8th. The stand was placed almost against the wall, in line with the young lady on the right. You can see the leg of the stand in the background if you look carefully (No point taking it out now, the image is widely used by the client).

I placed an Atom 360 frame left as high as the stand/ceiling would allow (I later lowered it slightly to give the hint of flare within the frame). This was coupled to a gridded beauty dish and firing at 1/8th output. It was angled to fire diagonally across the group, top left of frame towards bottom right, creating the accent light on the right sides of the team members.

A second Atom 360 was placed frame right at a similar height, again mated to a gridded beauty dish. This was positioned to fire diagonally across the group from top right of the frame, towards the bottom left. Output was marginally more due to the slightly greater distance from the group. It was set to 1/3rd less then 1/4th power output.

The main front illumination came from an Atom 180 firing through a custom 70cm folding Octa, placed immediately camera left, and raised as high as the ceiling would allow. Output was set to 1/4th .

Bearing in mind the group images were destined for their social media pages, this particular image was picked up by the marketing department, and now features as a large billboard on the side of the building, much to the dismay of the young ladies.

These are the kind of images we obtain for promotional brochures when asked.