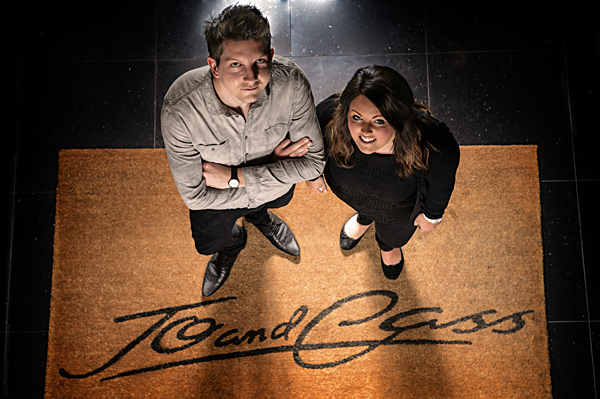 This was a straightforward brief for a hairdressing salon in Preston, Jo and Cass. Basically, provide something eye catching for a magazine article regarding their two newest recruits.

I’d photographed there before, so had a good idea as to what was available with regards to staff and space. I’d seen other images taken in the same salon that had been used in various publications, and they all generally used the front reception desk, as it had the Jo and Cass logo emblazoned across the front. Sure, make sure the branding is visible, but not necessarily at knee height, and certainly not in the same manner as everyone else has done before you.

The welcome mat had a very large logo woven into it, and it would be visible from the balcony above. After a quick check on the view, I then started to design my lighting to achieve what I had in mind.

There’s a 42” parabolic umbrella behind the two staff. The primary use is actually two fold here. It’s to provide the accent light, but also to spill light onto the black floor tiles to provide a haloing effect around the couple, hence the centre of the brolly was only around five feet from the floor. In my initial test shot, the haloing was off centre, and didn’t quite have the zip I was looking for. A quick shove to one side by about a foot, and an increase in power solved it. The light from the parabolic was provided by a Nikon SB900 firing at ¼ output.

Now, with regards to the fill light, I knew I would have to go as high as possible, to avoid the “evil professor” look, when they tip their heads back to look up. I would also need a fairly soft light and enough power to reach them. I chose to use the Lencarta Atom 180, firing through a custom small folding Octa, somewhere in the region of around 70cm across. It was placed on a compact light stand and raised until it hit the ceiling. The test shot revealed shadowing across the subject’s lower legs and also the mat, caused by the reception desk. This was expected anyway, but served to indicate exactly where the shadow fell. The Atom was set to 1/8th output.

To fill the darker areas on both the mat and the subject’s legs, I simply placed a Yongnuo YN560 mkII speedlight on the reception desk, with the head over the edge and angled towards the subject’s feet. The fitted stofen type diffuser spread the light widely so the mat was evenly lit. The speedlight was set to 1/8th output.

Jo and Cass can be found here

Corporate photography throughout the North West