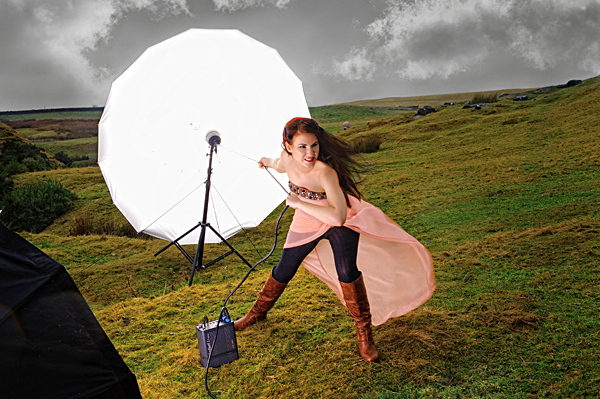 These images were part of an initial idea for the new 2013 Lencarta catalogue, which weren’t used in the final version. The idea was to have Jade struggling against the wind with the tethered umbrella, trying to stop it taking off in the wind. Whilst Jade is an accomplished actress, she didn’t really need to try very hard on this occasion, because the wind was indeed trying to drag our heroine off her feet, and take her paragliding across the hills of Yorkshire. This is the 180cm white reflective version, and is excellent for throwing a big soft light into quite a large area. The fact it’s an umbrella means it’s very, very portable too.

The main problem was trying to balance the ambient with the output from the Safari Li-on. Let’s start with the large parabolic umbrella. The Li-on head was plugged into socket B (200Ws) and turned down pretty much as low as possible. I knew it would effectively provide the accent light, but I was a little concerned it may be far too strong even at the lowest setting. The white of the umbrella is pretty much blown out as expected, but there is no loss of contrast over Jade, which was my main worry.

The front fill, or key light, is provided by my trusty, if somewhat clapped out 120cm folding Octa. This Octa has been in daily use for four years, and I’ll retire it from location work shortly. It’ll be perfectly serviceable in the studio, as the only real problem with it is the fact one of the rods has worn through the lip of the fabric, and can therefore protrude. That’s what happens when you constantly chuck your softboxes onto gravel drives etc.

Anyway, I had a second Li-on firing through the Octa at ¼ output from the 400Ws channel A. I had to lay the Octa on the ground, allowing it to naturally point up towards Jade, nicely filling in as she leant forward.

Although I was shooting at an ISO of 800 (yes, it really was that dark and miserable!), I wanted a decent depth of field for the foreground and background to be within the depth of field. I managed to use f11, and using a slow shutter speed of 1/40th sec, it still underexposed the ambient by a around a stop (-1.0EV). I didn’t want it balanced perfectly, as the background needed to look dark and gloomy, so as to capture the overall threatening weather. 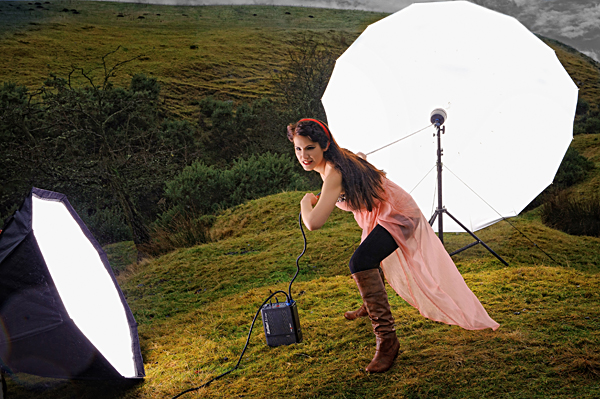 From a different position, but still the same settings.

Model is Jade Hespin, who can be found here