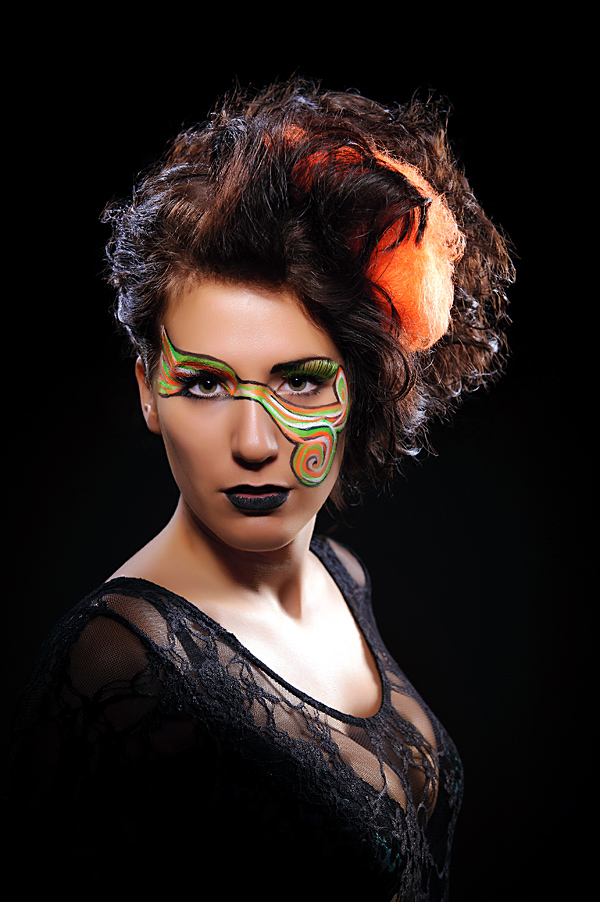 Meet Jade, the young lady seen on the Lencarta stand at Focus on Imaging 2012, and in a number of Lencarta shoots before and after. This image was to be used to promote the Lencarta presence at Focus 2013 ( Stand F31 for those making the pilgrimage this year ).

There were a number of challenges to be met here, not least the fact Jade’s hair and clothes were basically black, or at least very dark, and she was to be shot against a black background. Of course, I wanted to ensure there was enough light to reveal Jade, but not enough to spill onto the background and reduce the density of the black background. The only way to manage this is to use very tightly controlled lighting, utilising grids and honeycombs etc. Also, keeping the lights as close to Jade as possible will mean the light falloff beyond Jade will negate the possibility of the backdrop being illuminated.

Let’s work from the back forwards. Camera left there was an Elite Pro 300 at ½ power, firing through a standard reflector and a 20° grid. The light was angled to provide a rim light, also skimming across her hair to define the texture. Camera right was another Elite Pro 300 at about ½ power, firing through a gridded 40cm white beauty dish. The source needed to be larger from this side as it was also to provide the accent light to the top of her head and across her chest.

The main, or fill light is provided by a gridded 70cm white beauty dish, placed directly above the camera and angled down towards Jade. This was coupled to an Elite Pro 600 head, firing at about 1/8th output. The distance between Jade and the 70cm beauty dish was approximately just over half that of the other two heads. The main light was also aimed at the top of Jade’s head, so that the edge of the lighting pool fell off towards the bottom of the frame, allowing the lower area to provide a natural “frame” to the whole image by blending in with the background. The downward angle also accentuates Jade’s cheekbones, markedly defining her face.

Make up and hair was provided by Rachel Mason.