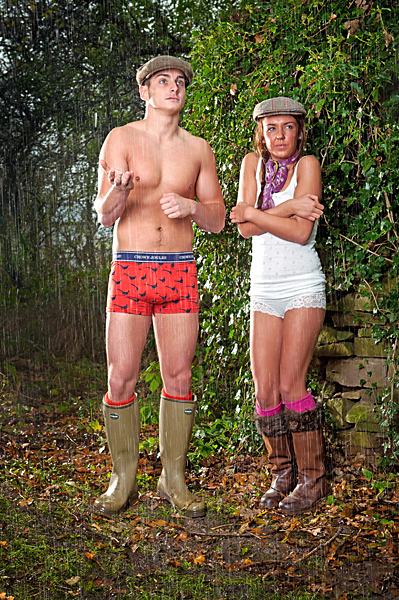 This was for an advertising campaign for Out of the City, in what was rather dismal weather. The poor weather conditions were capitalised on to give them a unique image for their campaign.

The idea was to head the campaign with the slogan “Should have gone to Out of the City”, similar to that spectacle ad. The idea being the young couple went out for a walk with very little on, a la The Emporer’s New Clothes, only to find they were in dire need of suitable country attire. The above image was actually the very last to be shot on the day. During the initial brief, I asked if they wanted the light rain to feature in the images, or not. They felt the rain wasn’t a particularly strong feature and it would be better to try and downplay the weather and concentrate on the models.

Anyway, skipping back to our last image of the day, once we had pretty much what they wanted, I asked if I could take just one more with the rain prominently featured, and this is the result.

It’s a very simple two light setup with one Lencarta Safari Classic head and pack, and one Safari Li-on head and pack. The Li-on head was coupled to a high intensity reflector so as to give me the required intensity over the distance, as this head is used frame left and quite a way back so as to provide the accent light to our models. I carefully positioned the young lady a little further back so she wouldn’t be in the shadow of her companion. The high intensity reflector also illuminated the rain to the left of the frame. Output was at 600Ws and 1/2 power.

The main light was provided by the Safari Classic firing through a folding 120cm Octa camera right, and although much closer to the couple than the accent light, it still needed to be at around 1/2 power due to the diffusion panels etc. You will also notice the rain isn’t quite as well defined on the right of the image due to the softer lighting.

Finally, I had to use an ISO of 400 combined with a slow shutter speed of 1/40th sec so as to bring up as much of the background detail as possible. 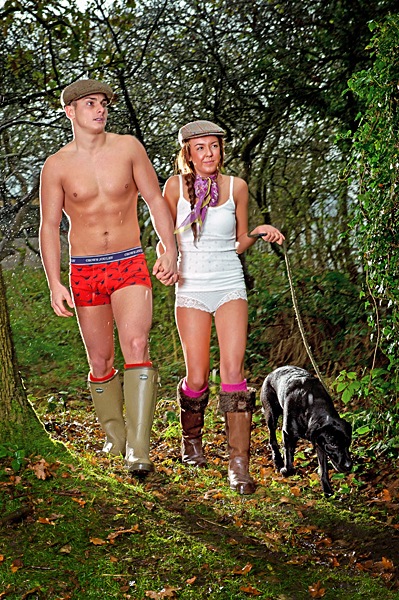 This image was the original choice for the campaign, before the above image was realised. Similar setup to the above, with a high intensity reflector beyond the couple and camera left, again at about 1/2 power and nicely catches Elsie the Labrador, providing a very healthy sheen to Elsie’s coat.. Main light was again the 120cm folding Octa right alongside me, and to my left. 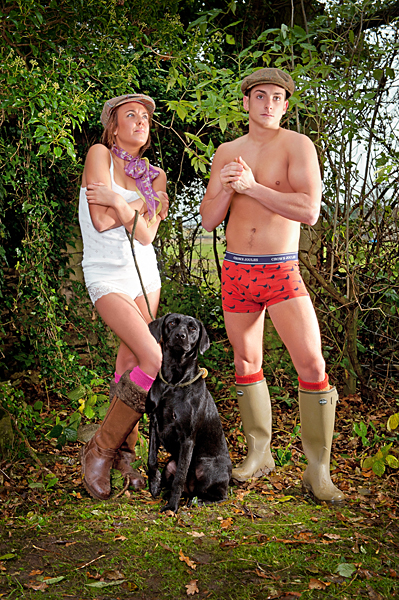 This is one of the first from the shoot, and I’m in two minds about it. It’s lit well enough, and carries interest, but just doesn’t have enough to carry off the theme of the advertising campaign. However, I often find the initial part of the shoot rarely delivers what I may be looking for, as we all need to settle into our roles. Models, photographers, makeup artists and everyone else. To be perfectly frank, I tend to treat the first fifteen minutes as a warm up session, letting the models relax into their roles. If I get something worthwhile during this time, it’s a bonus. This particular image is fine as it is, but not quite there as far as the slogan would require.

Accent light camera right and fired through a 70x100cm folding softbox, Safari Classic at 1/4 output. Main light provided by the folding 120cm Octa camera left, and an output of 1/2 due to distance.

Once all the images were seen, they went with the rain shot (First on the page).

Out of the City are based in Chorley, and are certainly one of the nicest clients I have the pleasure of dealing with. They supply a huge range of top brand outdoor pursuit clothing and are certainly worth a visit. www.outofthecity.co.uk

The advertising campaign was kicked off with the Live Ribble Valley magazine.