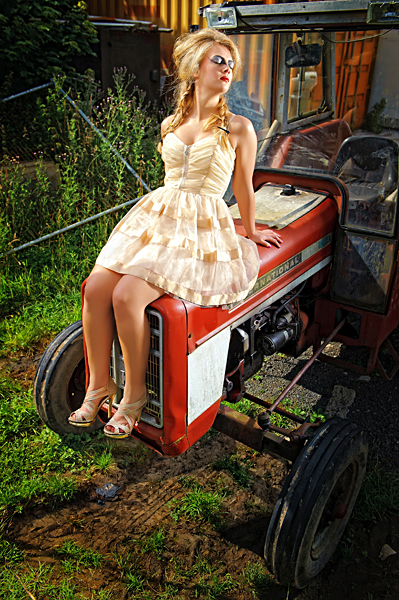 This is part three of an extensive fashion shoot for Lencarta. The first part of the shoot was done in an open grassy area with a couple of short trees, and can be found here. The second part was on an elevated wooden platform, and may be found here. The final part of the shoot took place in a cluttered area that featured a rather old and run down tractor (apparently not derelict!). We wanted a very different look to the previous two sessions, and the makeup and dress would certainly be more contemporary, adding to the juxtaposition of the tractor etc.

In the above image, the sun was very high and camera left. This cast very dark shadows along Josephine’s left side, and any detail at all in the tractor’s engine was lost. We decided to switch the sun’s position by 180 degrees, and placed a ProFold 140x30cm stripbox camera right and just out of frame. This was at maximum height and angled down towards Josephine. Power output was set to half on the Lencarta Safari Li-on, and both diffusion panels were removed to give quite a hard light, similar to sunlight. I then used a 70cm silver beauty dish to my left, providing the fill light, and again at an output of around ½ from a second Safari Li-on. The larger distance meant it would have less of an impact on the scene than the accent light from the stripbox.

Notice the accent light along Josephine’s right leg, shoulder and hair? That was provided by the sun, so it gives you an idea as to how close we kept it to the ambient.

The engine bay needed lighting separately, and it would need a lot of light because it was basically a black hole! We used a Li-on head mated to a high intensity reflector and placed it at the same height as the engine. The head was almost at full power due to the black grease and grime of the engine area eating so much of the light.

Finally, we added a neutral density filter to open the aperture a little and reduce the depth of field.

To get the height needed for the shot, I had to stand on a stool, which in turn was stood on a chair. Don’t try this at home! 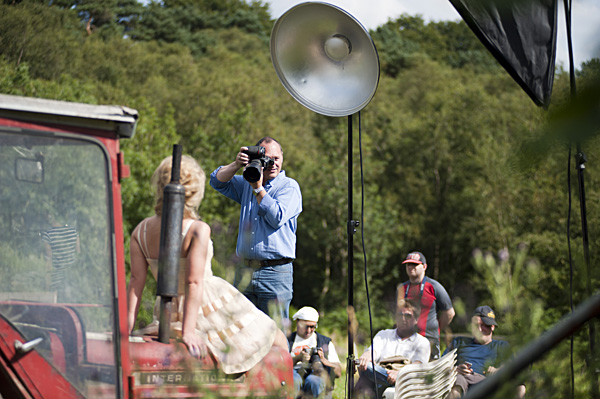 This was a behind the scenes image taken by Garry Edwards, a little earlier than the top image. As you can see, both the stripbox and beauty dish are to my left. This was during the initial lighting tests, prior too moving the “sun” 180 degrees. 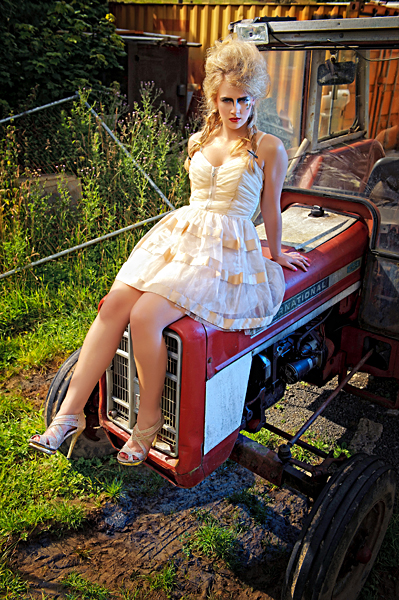 This second image has a slightly cooler feel to it, as we gel’d the stripbox blue. We had tried a red gel, but the light just didn’t look right. Far too warm, giving Josephine a rather ill look to be honest. I also increased the aperture by a third of a stop, due to a reflection on the glass pinging the highlights a touch. 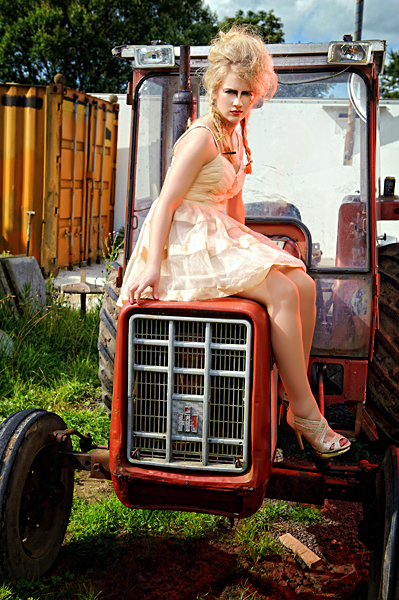 Last image, and from ground level this time. Same lighting set up, and another 1/3rd stop increase on the aperture due to reflection. Anyone notice the lip of the beauty dish in the windscreen? Oops!

The behind the scenes video, and a waffling account of the shoot, can be found here.