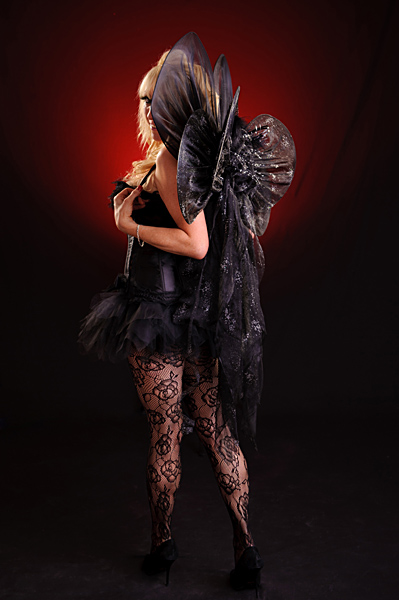 Remember the proof of concept shoot for the Pendle Imp Festival with Rachel Mason? Well, this is another of the shoots. The original test shoot was nicely paced, quiet and very calm. This was just mayhem!

There were girls everywhere, all in various states of undress, with and without wings, hairdryers, rollers and worst of all, Glitter! The damned stuff got everywhere, and took forever to clean up.

It wasn’t half fun 🙂

The image above was developed by the model herself, who wanted a cheeky peep around her wings. So that’s what we went for.

Whilst I started with a black background, I needed to separate our imp’s black outfit from the backdrop. I used a Lencarta Elite Pro 300 head with a standard reflector and red gel to light the backdrop. At quite a lowish output of around ¼, the falloff would be quite apparent. This was placed on the lowest stand I could find, although I really need to buy one of the backdrop light stands to be honest. It’d make things a lot easier.

Then I gave thought to the accent lights, and again, I needed to bear in mind her outfit colour, and also the fact she was blonde and had very fair skin. I chose to use a 70cm white beauty dish with a grid to prevent flaring. The white beauty dish is far more forgiving than a silver dish, and certainly better suited to models that are older than late teens. The white beauty dish also gives a slightly warmer tint to the light too, which is particularly desirable with such a pale complexion. The dish was mounted on an Elite Pro 300 and set to just slightly less than ½ output. The grid of course, tends to eat a fair amount of the output.

So, that was the back section of the image taken care of. Now for the front.

I had decided I wanted to put more fill to the right side, to bring up the detail in the wings. Also, I didn’t want to add too much from camera left, as I felt I could easily lose the impact of her peeping around the wings. The young lady also had a very trim figure, with well defined muscular legs, and I certainly didn’t want to lose the visual impact I felt the patterned tights gave her.

I used a 150cm octa camera right, couples to an Elite Pro 600, with output set to ¼ and at a distance of around five feet from the model.

I used another Elite Pro 300 through a 120cm octa camera left at ¼ output, and again at around five feet from the model. 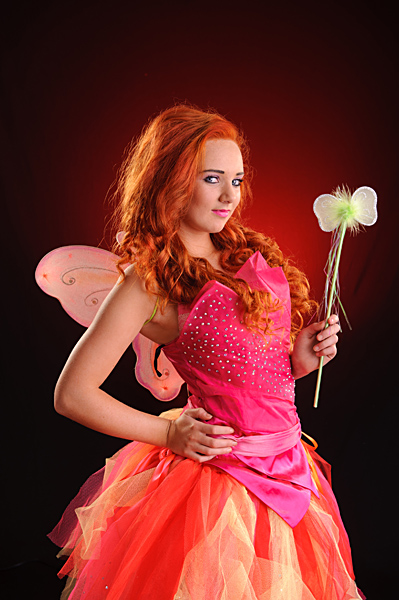 Very little change to the lighting setup, other than the addition of a 40cm beauty dish with grid, coupled to an Elite Pro 300 head, and firing at ¼ less another half stop. This head was placed to the rear of the model but off to the right, and at a height of around seven feet. Again, this was a white beauty dish, although the model really didn’t need the benefit of the white finish as her complexion was perfect. However, again she had very fair skin, and the dish did bring a slight warmth to her cheek. 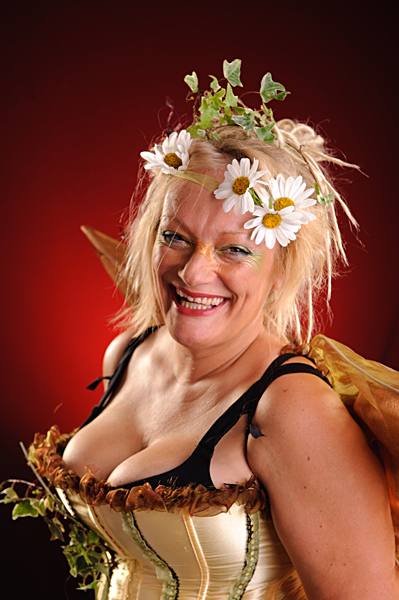 Same light positions as the previous image, but due to the model’s blonde hair, I turned both accent lights down by about half a stop each.