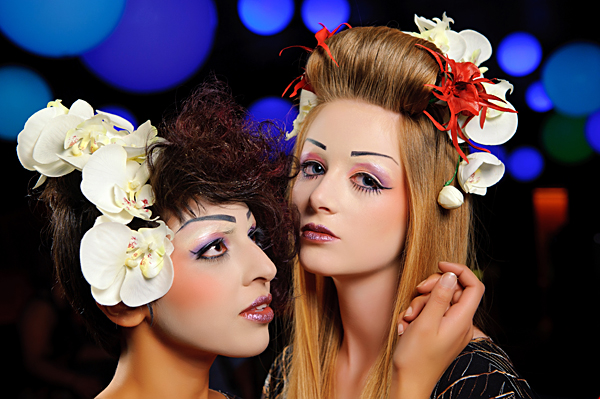 I work very closely with Mark Jackson of Passion 4 Events, and the variation in briefs can be quite something. From huge outdoor proms, right down to managing weddings on the day, with everything inbetween! On this occasion, it was the Pro Hair after show party, and it was to be quite an evening. The event was actually organised in conjuction with Rachel Mason of Dare to be Different.

The above image was taken for Sonara Parker, a makeup artist who caters for a broad range of clients, including the film and television industry. The hair was styled by Rachel Mason.

My main concern here was the fact the room was dark. Black as a bag type dark! Yes, there were some very interesting coloured globes hanging from the ceiling, but they seemed to be lit with pea-bulbs as they didn’t really contribute anything by way of light, but rather a lot of ambience to the venue. (Just enough to stop you falling over a chair!)

I chose to go down the speedlight route for this sequence of images, mainly because I already had them in the room for some earlier shots. I used a 60x60cm folding type softbox camera right, with an SB900 firing through at a 1/4 output and triggered via Yongnuo RF602s. It was slightly above head height.

Camera left, and further back than the models was an SB800 at 1/4 output, firing into a parabolic silver reflective umbrella, about 36″ across. This provided the subtle rim light to the model on the left (seen on her neck and hair), but more importantly, it provided the same rim light for the model on the right, seen on the outside edge of her right eye. If the rim light hadn’t been present, there would have been a marked reduction of light on the right side of her face and her right eye would likely have been lost to shadow.

I’ve already mentioned my concern regarding the lack of background lighting, and to keep the image interesting, I would have to ensure i managed to get something from the available light. I was shooting at ISO400, and didn’t particularly want to increase it too much, as I really only wanted a suggestion of background interest, rather than a lot of distracting detail. I utilised a slow shutter speed of 1/15th sec to take in enough light from the (almost) lit globes, but not allow anything to register from the rest of the room. The light levels were so low, I wasn’t worried about motion blurring of the subjects due to camera shake, as they were only going to be lit by the speedlights. 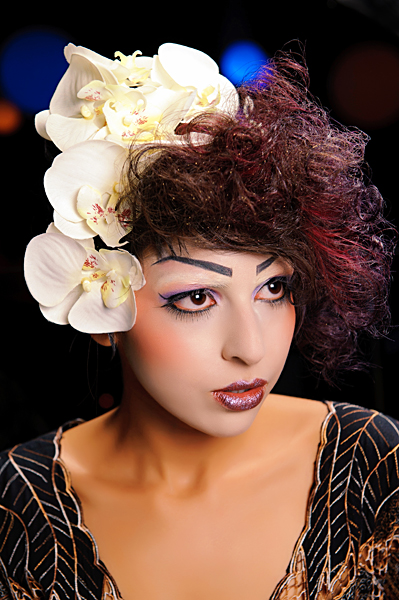 This time, I intended to hiughlight the hair and makeup of each model. The softbox was moved nearer to me, but still camera right, just!. It was also lowered slightly as the model is sat down. The umbrella remained fairly high, and was moved around to camera right, providing the hair and rim light, although I found I had to turn the power down, as it was causing burn out on the hair flowers. You can see some of the light just catching her right collar bone, which should give you an idea as to the height and angle I had the umbrella set at. By turning the output on the SB800 down to 1/8th, I found I had a rathr subtle hair light, rather than the harsher rim light effect i had originally envisaged. Far more pleasing to be honest. 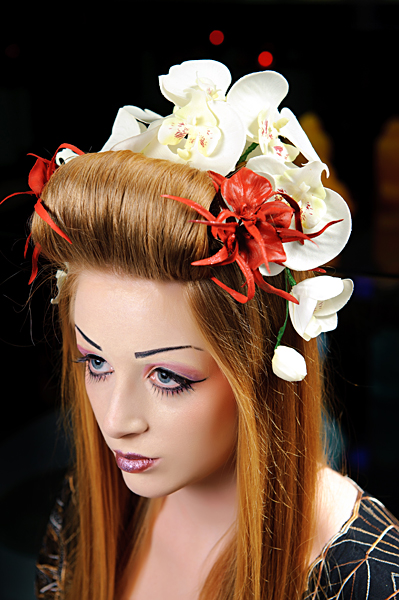 This time, I switched the softbax to camera left, same height as the previous image and same output (1/4). The umrella remained camera right and the output was turned down slightly further, to around 1/8th and 2/3rds. Even though the distance was the same as the previous image, you can see quite a strong highlight on her shoulder due to her having such fair skin.