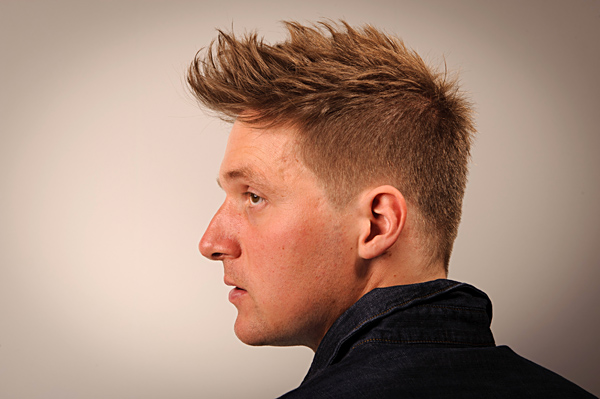 A change of tack here, as this time it was to be a male makeover for Toni and Guy. Again, similar restraints regarding the work area (four feet by six), but my approach would be a little different. Again, this was for an article for Live Preston magazine.

For the previous Toni and Guy assignment, I’d used a gridded snoot to put a concentrated highlight on the models hair, just to one side of her forehead. She had quite light hair which naturally reflected the light anyway, and the added hairlight was merely there to provide a summery hint etc.

Here, it’s a different story as the model has darker hair. Now, I wasn’t going for the “high gloss” look so often seen on the trendy TV hair ads (you know the ones I mean). I simply wanted to bring up the detail of his hair. The client also wanted the transition from almost shaved to the longer top to be emphasised and clearly visible.

A gridded snoot would be just too small a highlight here, so I selected a standard reflector with a 30 degree grid. I chose the 30 rather than a 20 or 10, because I wanted a less severe fall off of light, and a larger coverage than the other two would have provided.

The light was provided by a Lencarta Safari Classic at ¼ output, although both heads were only three feet away, giving me an aperture of f11 at ISO200 and 1/125th sec.

The gridded standard reflector was camera left and slightly forward of the model. The key light was just camera right and raised as high as possible against the ceiling. I used a white 70cm beauty dish with the diffusion sock fitted. On the last assignment, I chose not to use the diffuser as I needed a slightly harsher light to emphasise her cheekbones (what little there was) and also she had an excellent complexion. Here, it was more to do with the hair cut and style.

The client wanted the image to be fairly “gritty”, as it was to appeal to a male market, so ultra shiny hair certainly would go against that, but the style and detail must be apparent.

I’ve put a comparison together below, showing the hairlight off (left image) and on (right image). A lot of the hair detail is just lost without the hairlight. You will also notice there is more of a lift to his eyes, under his chin and under the peak of his hair. This was provided by a 110cm folding reflector positioned immediately under the beauty dish using an extendible arm, and angled roughly at 45 degrees. The reflector was able to refect some light from the beauty dish above it, but most of the reflected light actually came from the gridded standard reflector camera left, as can be seen in the comparison below. 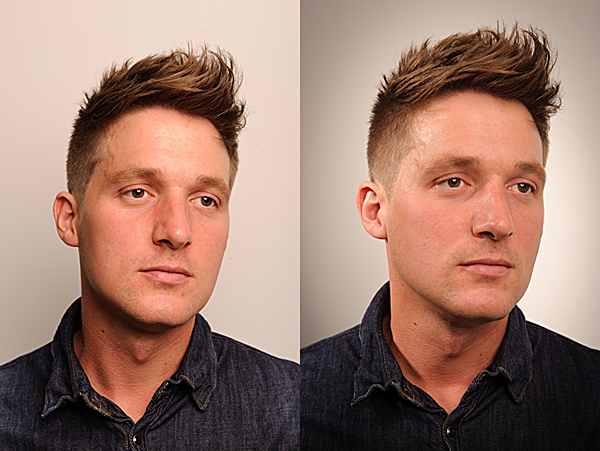 Just as an aside, you can see the beauty dish picking out what little cheekbone emphasis there is, when the fill light is off in the left hand image. The fill light kills it.