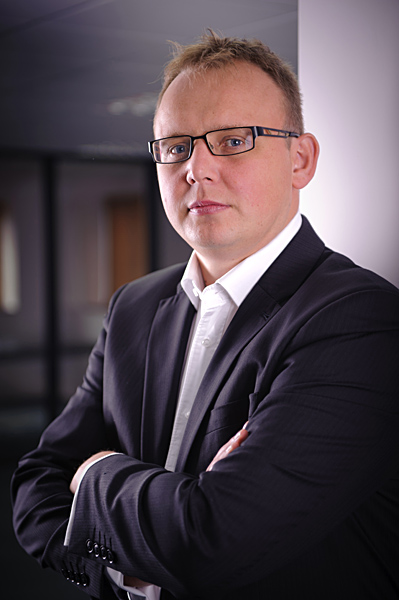 This was a fairly straightforward remit. Photograph one of the business partners (no problem there), make it a businesslike environment (plenty of spare office space, so that’s ok too), and make him look like he means business! (oops).

I’ve known Sam for some years. He’s at the top of his tree regarding business, which is PR and online marketing services. The company is Custard Media. But why is that a problem? Because Sam has a hard time keeping a straight face! I can’t speak to Sam for more than two minutes without his laughter and smile cracking me up. The photography wasn’t going to be any kind of problem, just Sam.

Sam has quite rounded features (careful how I put this, as he will no doubt read it!). Simply lighting either side would actually make him appear to put on another 20lbs (or 9kilos, depending on your age!). I chose to “short light” him. This technique involves using an almost cross lighting technique, where the rear quarter light is brighter than the main or key light. This has a “thinning” effect on his facial outline, helped by having Sam facing slightly camera left, again reducing his profile.

The light was camera left and further back then Sam. I used a 70x100cm softbox with a decent recess on the front panel to help reduce the possibility of lens flair. Incidentally, a decent lens hood is an absolute must! I didn’t need to grid the softbox for this series, but it’s an option worth bearing in mind.

I also had the light a little lower than head height, so as it would also fill under Sam’s chin, and reduce the possibility of shadowing, which would have given Sam the appearance of a double chin. The key light was provided by a 120cm folding octobox, pushed as high as possible against the ceiling and angled down towards Sam.

The light was provided by a Lencarta Safari Classic on minimal output, and I had to move the lights to approximately 12 to 14 feet from Sam to utilise a wide open aperture.

After twenty five minutes shooting, I had a lot of good images that Sam was pleased with. But this is the only one we managed to keep him from smiling.

I always enjoy my time with Sam and the rest of the crew.

There should be a lot more laughing going on at work, in my opinion 🙂

Sam’s company can be found at http://www.custardmedia.co.uk