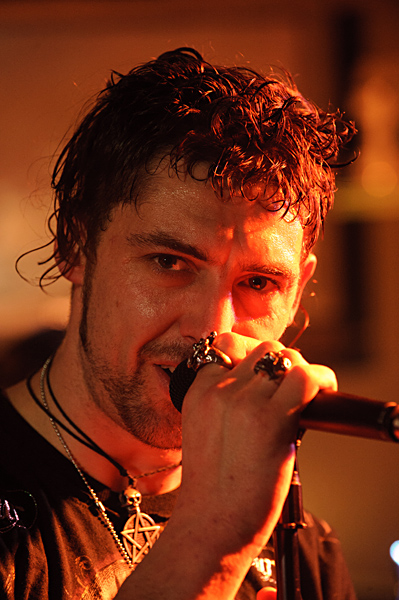 Well, I’d be the first to admit, I’m not a huge fan of live music. It’s loud!

I’ve also never really taken to Metal. So when I was asked to photograph Final Hour at a gig in Preston, I went with an open mind.

ok, I knew it was going to be loud, and I knew it would be Metal. Classic stuff from the era I remember, though didn’t actually follow. I also knew the venue wasn’t huge, so that was going to present its own problems.

Lighting was provided by the group, and was fine for what I had in mind, although the bass guitarist took on a rather fetching bright red hue thoughout the first set, due to a red light constantly on, and positioned about two feet from his face. Nice!

I warned the guys I’d wearing earplugs, not actually because of the type of music, just due to the general noise levels. (Note to self: Get more earplugs). Two of the guys shrugged and pulled earplugs from their own ears, whilst the other two didn’t quite hear what I said.   🙂

Besides the lighting issues, which to be fair weren’t as bad as I expected, the main problem was the fact the audience were only around six feet from the front man of the band. The area I had to work in was rather small, and as the night progressed, it got a lot smaller!

I was happy with the final images, as were the band. The biggest surprise of the night? I actually enjoyed myself  😀

ok, I’m not about to go out and buy a Metal thrash CD thing, but I’d certainly go to another of  their gigs. A very enjoyable night, and considering I never followed the original Metal groups when they were out, it was surprising just how many tracks were familiar. If you’re interested, Final Hour list their gigs on their website, and can be booked throughout Lancashire.

Possibly not a wedding band, but you never know  😀