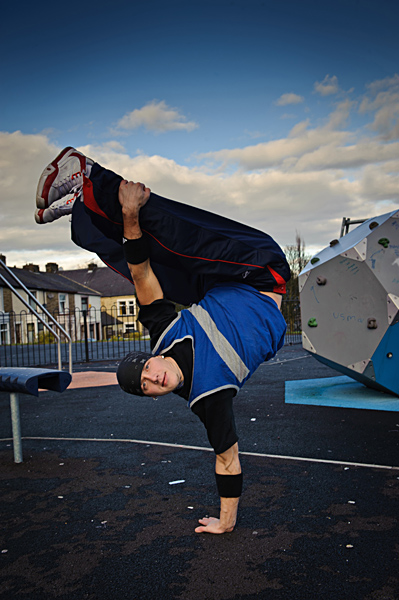 Rachel Mason (of Dare to be Different fame) was to be interviewed and an article published in Live Preston Magazine. Part of Rachel’s skills is organising publicity events with a different twist. One of her supporting cast is Martins Arbidans, a Russian guy who teaches dance, particularly street dance.

The magazine particularly wanted images of Martins performing his routine.  Well, this could work really well, or look pretty silly to be honest.

Photographing dance routines can end up with images that look pretty static, and look no more like a dance routine than musical chairs!

I talked things over with Martins, and asked what he had in mind. After all, he’d know what he was capable of, and what would likely work best. “Some handstand stuff, and flips” was his offhand reply, before grabbing a piece of playground equipment and immediately defying gravity.

This was going to be more akin to shooting a MotoX than shooting a dance routine! Martins flipped handstands and backflips with abandon, causing a crowd of locals to gather as he went from one routine into another, with only me trying to catch my breath.

The image above was the fourth of the day, and typifies the relaxed manner in which Martins went from upright to inverted without so much as a blink.

I have to say, after half an hour I was more out of breath than he was, and all I’d done was flex my right index finger!