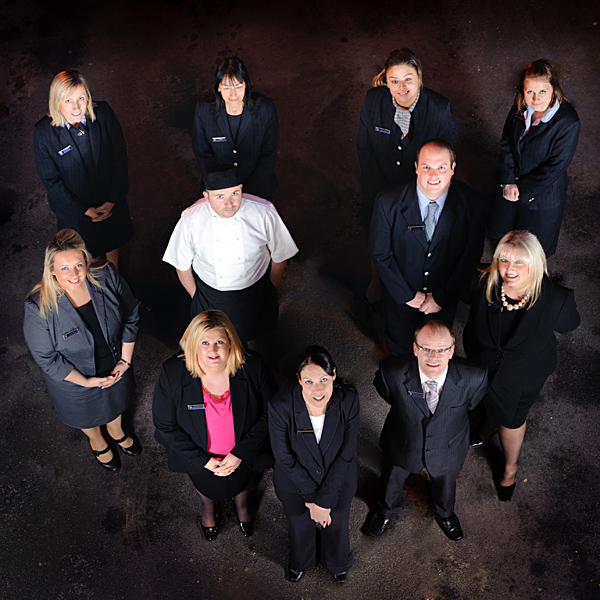 I was asked to provide some “corporate” staff images for the Tickled Trout, near Preston, essentially for PR and their brochure etc.

Hmmm, corporate staff images, eh? Sounds kinda stuffy to me. You know, those bland boardroom shots, or is that boredom shots?

Well, true to form, I was asked to photograph the team in the boardroom, although I have to say the folks were really good fun to work with, and the time flew by (for me at least. Don’t think Chef was impressed that much!). Certainly not the usual boredom shots I’ve encountered in the past.

So, we did the standard “sat round the big table” boardroom shots, followed by a much more relaxed group shot around Nicola (General Manager) at the head of the table.

Nicola had mentioned she would quite like an outdoor shot, possibly from an elevated position if we could swing it. Well, time had crept up on us, and the light was fading rapidly. Whereas the two speedlights had originally been intended for fill light only, they were now going to have to provide the main source of lighting, with the fading daylight hopefully providing some fill from behind the subjects to provide some seperation from the tarmac.

There’s two speedlights either side of the group, basically just out of frame at the two lower corners. Originally set to use CLS via Radiopoppers PX system, but the metering was letting me down, causing an error beep from both speedlights. I switched to manual settings of 1/4 output on each speedlight and had the lightstands moved a little nearer.

ok, it was a bit of a faff, and the only part of the car park directly under the 2nd floor window was the disabled bay with a ton of yellow hatching on the tarmac, oh great! Well, post processing and the clone tool will have to sort that out.

It took two shots to figure the CLS just wasn’t going to cut it, three more shots to nail the exposure and a final keeper. Total time including light setup, finding my way to the room, switching exposure types and then taking it down was a total of around ten minutes. But it must have felt an absolute age to my poor subjects, because it was sub zero out there.

The whole session was more enjoyable than it should have been, and that was purely down to the folks I was dealing with. The Tickled Trout is just off junction 31 of the M6, and I can highly recommend it as a venue for meetings, conferences and weddings. For a large hotel, it still manages to have that family run atmosphere, which is rather unusual.