Food Photography in Lancashire and the North West 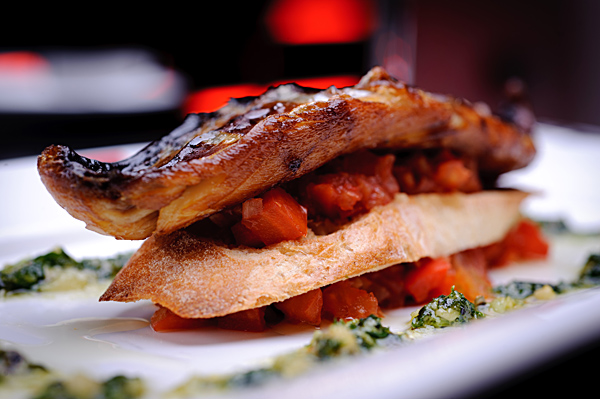 Following on from the event catering I covered with Fusion Outdoors, Russell asked me to photograph both the restaurant (Fusion Room, Preston) and also his food. After a meal at his restaurant, and spending time with Russell, how could I say no to such a likeable guy? Besides, the way the food is presented is such a feast for the eyes, it would undoubtedly be a real pleasure to work with him.

Well, the weather wasn’t too clever, and getting across to Preston turned out to be rather interesting. The car park had a lovely mirror sheen to it, enforcing a somewhat penguin like waddle when ferrying equipment to and fro between car and restaurant. Arriving 20 minutes late also puts me on the backfoot, as I hate being late for anything.

Russell immediately thrust a hot cup of coffee in my numb hands, before introducing me to the staff that had come in early to facilitate the shoot. Craig and Chris in the kitchen, and Russell’s wife Silk at the front desk.

I basically took over the top floor of the restaurant, setting up a table specifically for the photography. Whilst the first meal was being cooked, I photographed the restaurant itself. There was plenty of atmosphere to be captured, even though it was empty. The lighting helped provide the mood, and the additional red lighting along the bar added to the ambience quite nicely.

For the food photography itself, I was using a Lencarta Safari set up, along with a 120cm Octabox boomed above the table as the key light. I also had a 70 x 100cm softbox off to the left, and due to the distance, it was approximately a stop to a stop and half lower than the key light. The lights were running at 1/8th output, which gave me f8 at ISO200 and 1/60th sec. This was quite a few stops above the ambient, but not quite killing it altogether.

I ran into problems about an hour into the shoot. I had part packed the car the evening before as I was to leave quite early. Unfortunately, the sub zero temperatures had a detrimental effect on my lighting system, particularly the generator unit. It gradually took longer and longer to recharge the capacitors, and eventually threw it’s hands up with a screaming alarm and flashing lights.  oops!

A call to Lencarta’s customer support and a very brief conversation with Garry meant I was reassured and the unit would be dealt with as quick as possible (another shoot loomed close on the horizon!).

Now that my mind was put at rest with reassurances from Garry, I had to get the rest of the portfolio in the bag for Russell. This was no biggie, as I tend to always have a backup plan should I have any equipment problems or failures. I dug out a couple of sb-800 speedlights and softboxes, and working at a closer distance, I managed to retain the settings I had originally set for the Safari. The speedlights were coupled to Quantum battery packs to aid recycle times and battery longevity. Although in truth, the speedlights were set to 1/8th power and would have recycled quickly enough at that setting to have kept up.

The main image at the top was shot using the Lencarta system, whereas the smaller images were shot using speedlights.

Incidentally, the superb customer support I received from Garry at Lencarta means I’ll be talking to them first when it comes to equipping the studio.