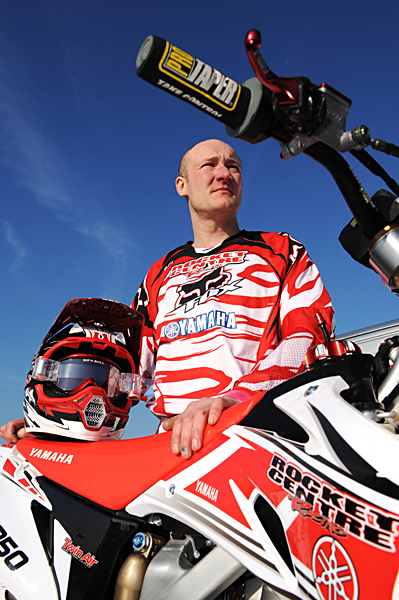 This was a commercial shoot for the Rocket Centre in Blackburn. ok, so it’s not a product shot as such, although the portfolio was to show the team members along with their bikes. This is Lee Buck, the team captain, giving his best “serious” look.

There’s a number of things that went into this shot, including exposure fudges to darken the sky, fill light to bring up the details on the bike, and of course the composition.

What? you thought it happened by accident? This was the third or fourth shot in this particular setting, finally getting the handle bar in the right position to frame Lee. The idea was to have the handle bar and bike seat provide a semicircular frame around Lee, helping to draw the eye of the viewer.

The dark blue sky was achieved by under exposing by a full stop (-1.0EV), which of course caused our subject to become equally under exposed. To compensate this, I used an sb-900 to fill in the recesses of the engine and also light Lee. I set the sb-900 to +1.0EV to compensate for the underexposure set within the camera.