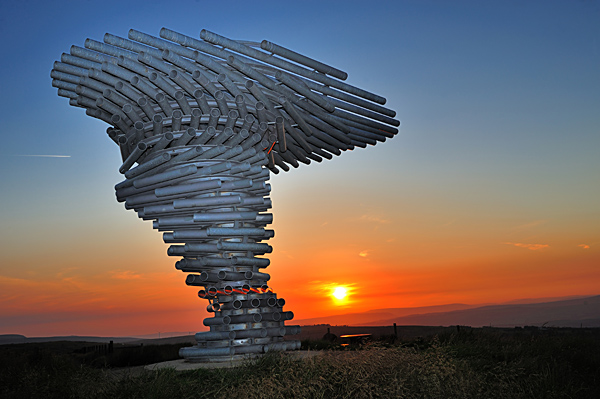 I received a call, late one Thursday afternoon. “We need some promotional images of Burnley and it’s surroundings”. Sounds ok to me.

“We also need some images of the run down areas too”. That’s pretty straight forward too.

“We can show you some of the thumbnails provided by our client, Burnley Council, which will give you some ideas as to what we want”. Make’s things easier for me.

This was an assignment from a PR company based in Birmingham, who were putting together a development proposal on behalf of Burnley Council, which  was to go before the Government. The thumbnails supplied were ok, but obviously taken on a compact camera or with little imagination (or both). I believe the original full sized images were no longer available, as the disc had been lost. (I didn’t bother asking any more details).

A lot of the images were good ideas, such as an old type of mile stone, indicating distances to Burnley and Padiham. Unfortunately, they weren’t well exposed, or decently composed to make any sort of impact. All images were straightforward to update with punchy replacements, grabbing attention and getting the message across.

Only one bothered me. The singing, ringing tree at Crown Point, Burnley. For those that don’t know, it’s a panopticon (Google it, and you’ll find a collection of fascinating, functional sculptures around the area). Basically, even in the slightest breeze, the passing wind causes the metal tubes to hum and sing, hence it’s name

Why did it bother me? Because the thing had been photographed to death! From hideous, bland and boring snapshots, all the way to richly coloured, well composed vistas that did the town proud.

I couldn’t get away with fudging this one, it had to be decent. And if possible, it had to stand out from the also rans. Great!

I’d run around all day Friday and Saturday, getting all the images I needed, bar the sculpture. Last day Sunday, and it was beautifully clear all day, and with that in mind, I spent most of the day stuck in the office, working on the images already taken. I finally threw my gear in the car and headed out to Crown Point early evening.

The sun was starting to set and I took several shots with the sun behind me, with the sculpture looking out over the town of Burnley. It looked pretty good, and nicely put the sculpture in context with the town. But, it wasn’t great. Lots of other images had been taken in a similar vein, and used on all sorts of promo material with regard to the town. I had to do better than that.

Walking to the far side of the sculpture, I decided to treat it as I would a contemporary portrait in the same circumstances. I’d make both the subject and the sunset an equal feature.

I metered for the sunset to get an idea of the basic settings, and then under exposed by a full stop (-1.0EV),  causing the sunset to nicely saturate, along with the sky. Of course, my main subject became nothing more than a silhouette, which wasn’t what I wanted. To combat this, I used a flashgun, but set it to compensate for the underexposure by pushing the flash output to overexpose by one full stop (+1.0EV), effectively cancelling the dialled-in underexposure, but only on the sculpture.

I took several shots as the sunset progressed, and this is my favourite, possibly because of the plane in the background. It became the client’s favourite, being used as the cover image for the proposal brochure. They also have a large canvas version of it in their office in Birmingham.

Why do I like this image so much? It’s the memory of the eerie melody being gently sung by the sculpture as I stood around waiting for the sunset to progress. It was quite beautiful.