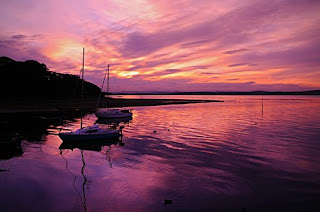 The above was the culmination of several attempts to get this image, each attempt accompanied by cursing and limping. However, I would consider the aggravation and discomfort to be worth it in the end. It was taken at the river mouth at Crammond, on the Firth of Forth.

Why the interesting colours? Well, the shot was taken on a manual setting of 1/250th sec at f6.3 200 ISO which basically underexposed the shot by just over two stops, as the correct exposure was 1/60th sec at f5 200 ISO. This helps saturate what little colour was there, and believe me, there wasn’t much!

So, that’s the basic exposure, so what about the colours? That’s the easy bit, as I just set the white balance to fluorescent which gave the the colours a nice mauve colour cast.

Post processing? Using Nikon’s Capture NX (Yes, it’s slow, but it does a damned fine job) I accentuated the white balance further, to increase the mauve cast, and then increased the vibrancy a little too. In the end, a nice little holiday snap. 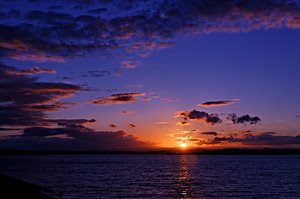 The second shot was taken a few evenings later, and again made use of the fluorescent white balance to add the mauve colouring to the base of the clouds. Again using a manual setting of 1/1600th sec and f8 at 200 ISO to underexpose by at least three stops (I didn’t take a standard exposure for reference this time, sorry) which heavily saturated the blue of the sky and the orange of the sunset (which, incidentally, was barely visible). Again tweaked in Capture NX to up the vibrancy a touch, although this required very little post processing to be honest (well, a little noise control).

So, simple holiday snaps to something a little more perhaps, with no real effort other than a little forethought.

ok, so it looks like a busman’s holiday, but these were for my enjoyment, and not some editor or other, which suits me fine. (Even though I’m still using crutches at the moment, the editor of Off Road Rider magazine still asks if I’ll be out at the track side for the weekend. Sheesh, these guys are all heart)