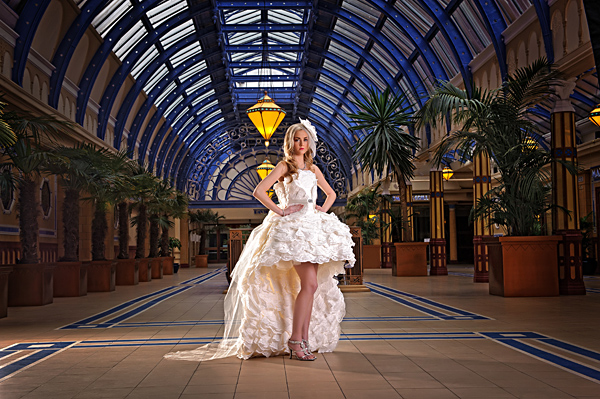 When I saw an image of the dress, I thought it was “nice”. I thought more of it when I was told it had been designed by Daniella Jepson. I was a little surprised to be told Daniella had made the dress by hand. I damn near fell off my chair when I was told the dress was made entirely of paper doilies, I kid you not! Hundreds of the things! (I was more surprised to find out it had been specifically designed to be worn).

Anyway, Daniella had entered it in a competition that was being held at Blackpool Winter Gardens, and she had been approached by their marketing manager who wanted some images of the dress to promote the Winter Gardens as a wedding venue. Yes, this is where I come in.

The Winter Gardens as a venue is quite grand and has a really nice Victorian era feel to it. A very welcoming ambience. I wanted to preserve the ambience and feel of the place, but ensure the dress was the focus of attention, if not the scene stealer.

Whilst you may assume the hall would be quite light and airy due to the glass roof, these images were taken on the 9th February, and believe me, it wasn’t particularly light outside, as the weather was very overcast and rather miserable to be honest. That was my first challenge as the lighting within the hall was actually quite subtle, with the hanging globes along the centre and right, which weren’t particularly bright. This worked in my favour, as I’d already decided the best way to go would be to lower the ambient by about a stop to a stop and a half (-1EV to -1.5EV), which would make our paper bride “pop”.

Camera left and beyond Katie, our model, is a Lencarta Safari Li-on single head at 400Ws on minimum output, firing through a high intensity reflector. This provides the accent light you can see along Katie’s right arm, her hair and the dress. This quite nicely separates her from the background.

The main light is provided by a single Lencarta Safari Classic head at minimum, firing through a folding 120cm Octa. I had to keep this fairly distant from Katie, so as not to over light her. The Octa was essentially at around shoulder height. 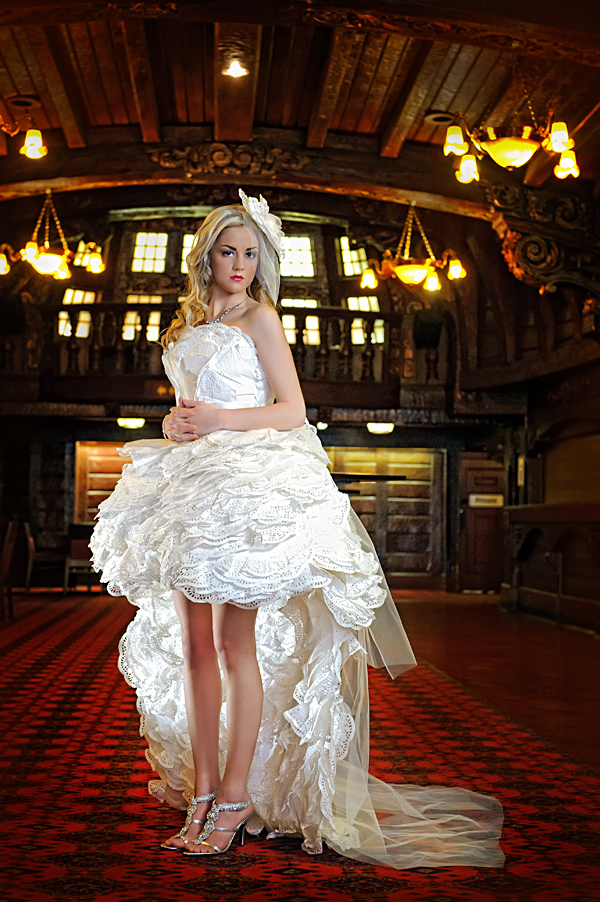 This particular image was more of a challenge, as it was so dim in this particular bar area. All the surrounding walls and ceiling were a dark wood, and the lighting was again quite subdued. The problem here was to slow the shutter speed sufficiently enough to capture the ambient light, but I ran the risk of struggling to reduce the power on the additional lighting that would bring up our model and dress. I also had a problem insofar as the existing lighting was all tungsten, and quite strongly so. If I shot with the Safari Li-on, I could use the 200Ws port and wind it right down, but I’d struggle to gel a 120cm Octa. I opted to use speedlights for a number of reasons. The first being ease of applying gels as they can be simply held by an elastic band or stofen etc. Secondly, the power requirement for this particular shot meant speedlights would be more than adequate, and I’d likely end up very near minimum anyway. Finally, I have a number of speedlight softboxes, brollies and other bits and pieces I always take to these shoots anyway. That settled it!

Subtle accent light frame left comes from a CTO gel’d speedlight in the hands of my trusty assistant, Wayne Myers. Power output set to around 1/32nd.

Main or key light is immediate camera right, and consists of a CTO gel’d speedlight firing through a 60cm folding softbox at around head height, Power output was 1/16th although the distance was a little more than the accent light. The greatest challenge with this particular shot was to ensure it was sharp, as it was hand held at 1/25th sec. This is  my favourite image from the day, and probably because it was the most challenging. 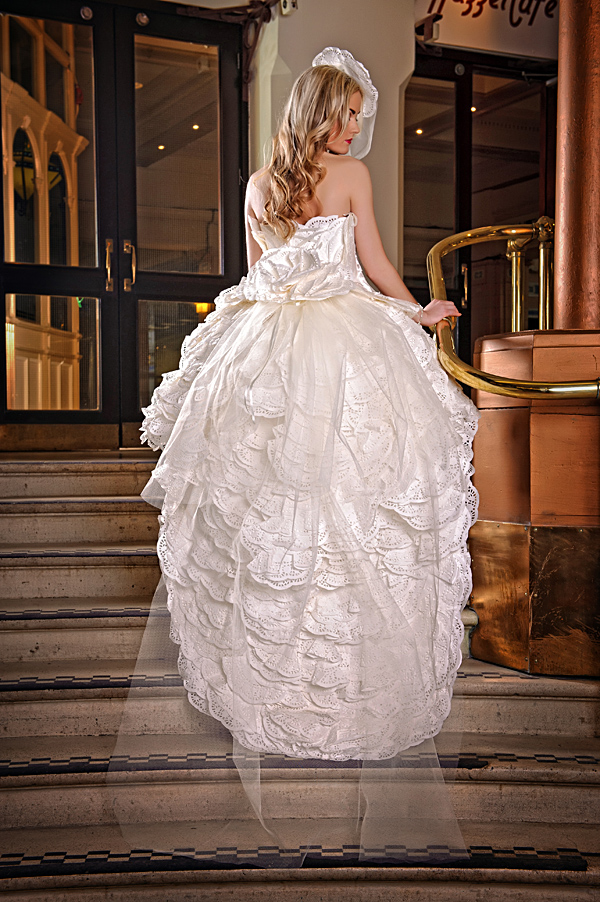 I love this particular shot because of the detail in the dress. It’s an amazing piece of work, and I wanted to show the attention to detail and the effort that has gone into this amazing garment. We’re back with the Safari location kits here. Accent light is from the top of the stairs, out of frame left. Safari Li-on head in the 200Ws port, firing through a 70x100cm Profold softbox. Main or key light is the other Safari Li-on in the 400Ws port, firing through a Profold 120cm Octa. Power output was set to 1/8th.

The area beyond the doors at the top f the stairs was black in the initial shot, due to the ambient light level. Wayne is beyond the wall with a speedlight at full whack.

I have to take this opportunity to thank Wayne for introducing me to Daniella, an excellent makeup artist with a cracking creative streak and mad enough to join the team.