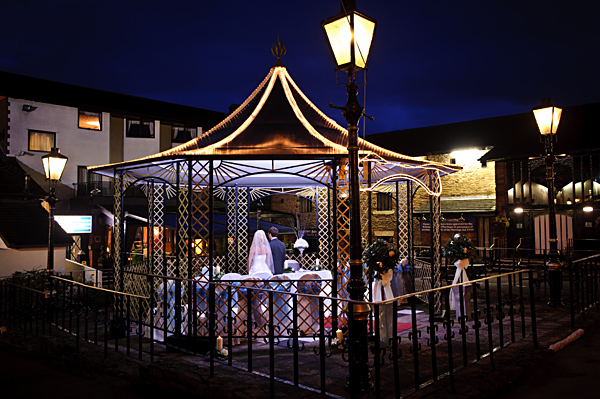 One of my more interesting wedding venue brochure shoots just lately, was Park Hall near Chorley. I’ve already covered the general shoot in a previous blog entry, but this one is to do with one of my favourite features of the hotel.

One of the features at Park Hall is the beautiful bandstand that’s lit at night. Ok, so the standard lighting is actually the strings of leds along the roof edge and up to the top of the dome, plus the lit street lights. But all the same, it had quite a magic about it. The interior of the bandstand is actually quite dark. There isn’t any lighting within the dome, so it relies on the light spill from the street lights at each corner of the area.

To provide the required light levels I would need to show the bride and groom, I set up a single Lencarta Safari Classic head on a stand that was raised to its full height, which actually put it into the dome at the edge. If you look carefully at the above image, you can just see the lightstand and the bottom of the head almost centre in the image. It’s behind the lattice work, which helps disguise it. The head was mated to a standard reflector and fired directly up into the dome to bounce the light back down on our bride and groom. The output from the Safari was at about ½. This allowed faster recycling, but also ensured I was able to use a decent aperture at f8.

My main concern here was the ambient light, or rather the lack of it. I’d had to wait till quite late for the hotel lighting on the bandstand to kick in, and it didn’t come on till 2000hrs. Bearing in mind this was the 19th of September, you can appreciate there wasn’t any ambient light to speak of by the time the lights came on. The manager of the hotel was doing her best to see if we could have the lights on earlier, but unfortunately, they were on a timer, and that was that!

Anyway, it just gave me another challenge, and to be honest, to combat the absolute lack of ambient, I upped the ISO to 800, and utilised a tripod with an exposure of 1 second to ensure the ambient registered sufficiently to give the image atmosphere. To ensure the bride and groom appeared crisp in the image, and negate any movement during the exposure, I used 2nd curtain synchronisation, or as some would call it, “dragging the shutter”.

One other thing about the above exposure, or in fact all of them to be honest. The white balance was all over the place. The Safari is daylight balanced, but the leds were more of a warm light, but not quite tungsten. The street lamps were tungsten on steroids!! and there were a lot of fluorescent tubes in the background, around the courtyard. There really was no way to gel up the head and match it, because there were just far too many variables. In fact, in the end, I think I left the white balance set to fluorescent as I’d already made the decision to output several white balance versions from lightroom 3, and then blend the correct areas to make a finished balanced image. 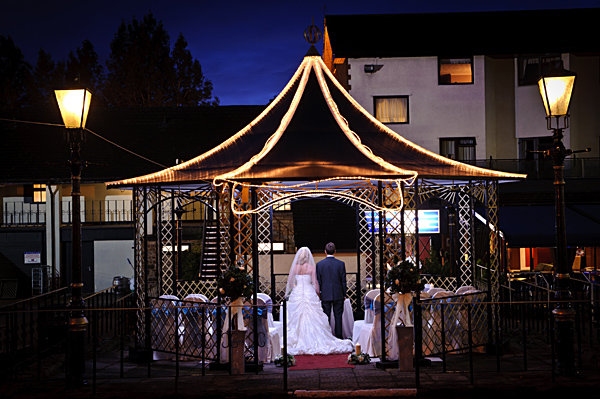 Another view of the bandstand, this time from the entry point. 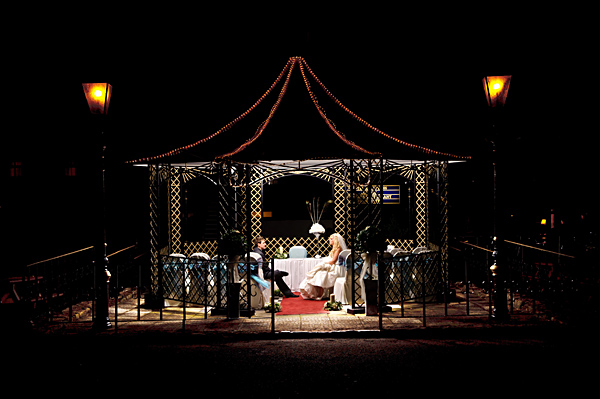 This was actually one of the prep shots, and really was only to gauge the lighting level against the ambient so I could fine tune the exposure to balance it out. This is one of those light testing shots that tends to make you smile and you tuck the image away as a happy accident. Definitely not the look I was after, as there is no recorded ambient to speak of. This was the first lighting test, and really, I was only after seeing the effect of the Safari on the interior of the band stand. Sarah and David were relaxing and chatting, and paying little attention to me as I intermittently popped the safari to see how things were going. I really like this image, as the couple are nicely lit and the bandstand is visible due to the light spill. The roof leds are only just bright enough to define the outline of the roof, and the street lamps barely register. I feel it carries a lot of atmosphere.