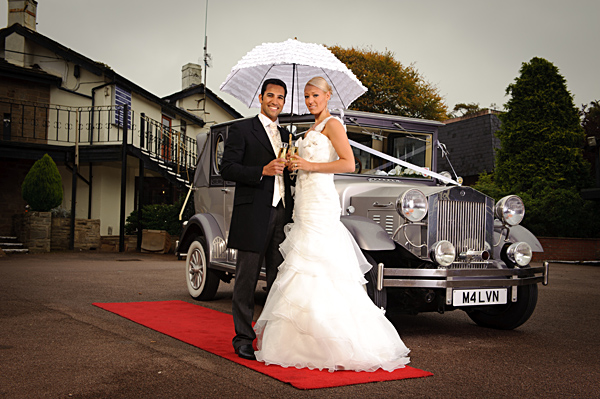 When I do a brochure shoot for a wedding venue, I encourage the venue to include the suppliers who support the venue in their weddings and development. This particular assignment was for Park Hall Hotel, part of the Lavender and Best Western group. The wedding cars in this instance were supplied by Malvern Wedding Cars, a superb company I have dealt with regularly over several years.

This part of the shoot was to benefit both the hotel, and the car hire firm, although both had quite different requirements regarding their images. The hotel would obviously prefer themselves as the main focal point for the image, whereas the car company would prefer the vehicle itself to feature quite strongly. You usually can’t manage both in the same image, and it’s far easier to accept it as a given fact and work towards getting individual images that are acceptable to all concerned.

The above image is geared towards the car company, with the bride and groom putting it in context. The weather was tripe, with a constant fine drizzle that occasionally lapsed into rain. I approach brochure shoots with the same attitude as I have towards photographing a wedding. It’s a one day event that can’t be repeated, and I have to get the images. There is no re-run!

I metered for the ambient, and then underexposed by a full stop (-1EV), which gave me 1/160th sec and f7.1 at ISO200. The light was provided by a Lencarta Safari Classic, with a 120cm folding octabox to my left at a height of seven feet and angled down towards the champaign glasses. This was to ensure the light was central in the image, with fall off towards the edges of the frame. The second light, (which wasn’t really a fill light insofar as it would be providing most of the light for the car, and also the back of the dress) was fired through a 70x100cm folding softbox to my right at a height of around five feet and with the softbox in a portrait orientation, ensuring the bridal gown had full coverage. The Safari output was at about ½ power.

A bit more of a relaxed image for the Malvern, and the drizzle was at its lightest at this point. All the same, I had to try and keep the time to an absolute minimum. I set the lights and metered as well as I could, before the car roof was dropped for the shot. The 120cm folding Octabox was to my right here, and again at around seven feet high. This time, the light stand was only just out of shot, and I caught it in frame on the first go. The light is about four, possibly five feet from Fabio and Helen.

The 70x100cm folding softbox was to my left, again at a height of seven feet, but a little further back at around six feet. The Safari output was reduced to ¼ power. 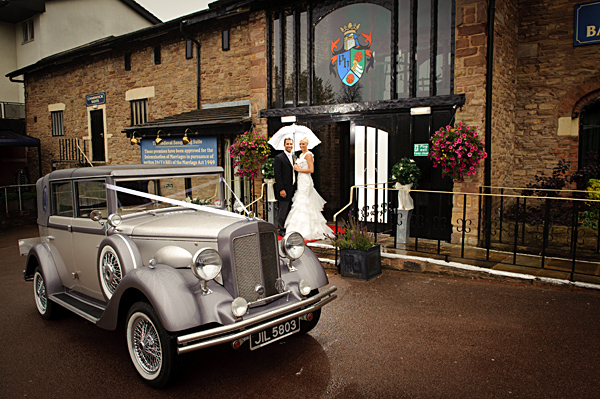 This image was a tie in for both parties. Yes, even after what I said earlier! This doesn’t always work, although both parties were happy with the image.

Completely different approach here. I swapped the Safari for a single speedlight, which I tucked inside the parasol. In this instance, I was utilising the iTTL system to control the light output of the speedlight, and fired it via the RadioPopper PX system. I set the camera to underexpose by a stop (-1EV) and set the speedlight to overexpose by 1 stop (+1EV), so in theory, the couple would be correctly lit. The only fly in the ointment is the fact the parasol looks a little over exposed due to the fact the speedlight is firing up into the parasol so as to bounce the light and soften it for the bride and groom. Not a big deal, and it was far more important to have the light softened.