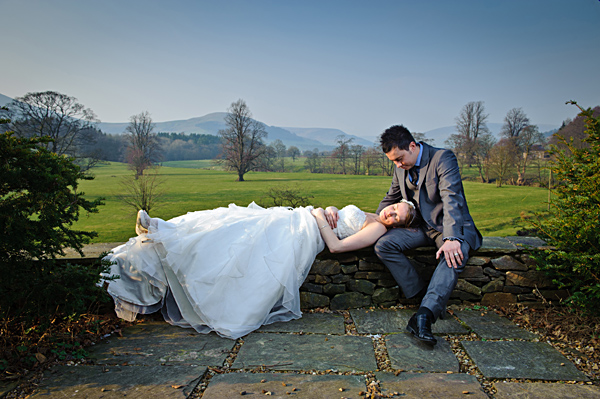 The Inn at Whitewell is my favourite low light venue. Full of romance and atmosphere and a great place to work. The interior is lit in such a manner as to foster intimacy, and can be obliterated all too easily with exuberant flash users. However, on this occasion, they were in need of exterior images to promote the hotel on more than just its ambience. Their current wedding images used to promote the venue were pretty much standard issue, and really no different to all the other images seen up and down the country when viewing wedding venues. My remit was to provide images that would set the hotel apart.

What I wanted to do, was to portray the exterior locations with a similar ambience and romanticism as the interior. Whilst we had good weather with sunshine, that would also be a problem. The bright white wedding dress would cause some problems regarding dynamic range when the shadows are taken into account. Now I know most wedding photographers dislike bright sunny days for the same reason, but I actually love them. You just can’t beat the rich saturation and vibrancy of colour that you get on these days. Dynamic range problems? easily overcome if you add even more lighting to lift the shadows.

If it’s nothing more than a slight lift to the eyes, or the side of the face, a reflector can help. For a little bit of a lift, then a speedlight or two, firing through a diffuser of some sort, such as a softbox or umbrella perhaps. For the really harsh, strong sunlit scenes, I go with the Lencarta Safari. Having said that, I’ve often used the Safari when all I needed was the softest of touches from the additional light.

In the scene above I needed a little more light just to balance the sunlight that was coming from the upper left corner, the give away being the shadow from the bush on the left. The sun was actually on it’s way to setting, so wasn’t a full on glaring problem, such as you would get mid-day, and also provided a gentle warming hue to the scene. I still needed to balance the additional light to match the levels of the scene, without making it look too obvious. For the image above, I chose to use an SB-900 in a 60cm softbox, triggered by Radiopoppers PX system. 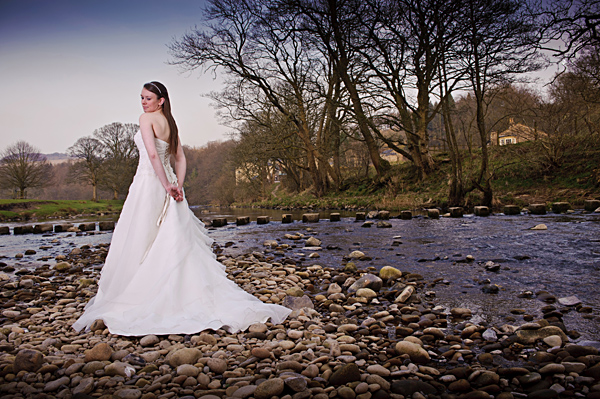 This second image needed more oomph from the additional lighting, and a speedlight (or three!) just wouldn’t cut it, to be honest. The Lencarta Safari was the only way to go here, especially as I was going to have to hold the octobox mounted on a monopod in one hand, and shoot single handed at the same time. My assistant (Anne) wasn’t up to wading knee deep across the river to get to the shale bank, and I don’t blame her, especially afterI had to piggy back the groom across!

The stepping stones in the background are a feature of pretty much every wedding shot at the Inn, although they all photograph it from the other side. I wanted the Inn itself to be visible in the background, but more than that, I wanted to feature the shale bank itself. Seeing as our bride was to appear fairly isolated, I chose to  underexpose the ambient light by a stop and a half, thereby darkening and saturating the background, whilst our bride remained correctly lit from the safari. The safari was at 1/2 output, through a 120cm octobox and triggered via yongnuo RF602. 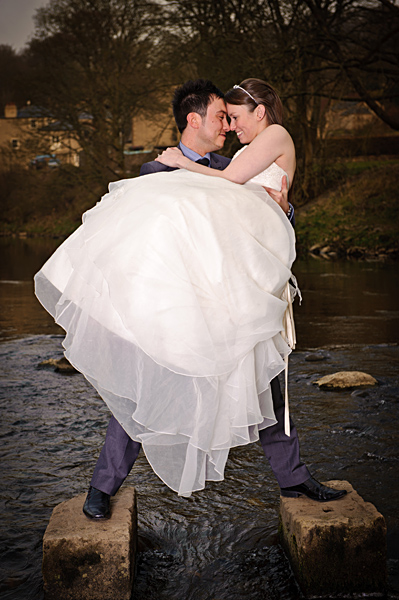 Of course, I couldn’t ignore the stepping stones, they’re quite famous in regard to wedding images at the hotel. Similar sort of idea to the above image, although I was much closer to our bride and groom here (and at risk of having my wellies fill with water!). The octobox was camera left, clenched with white knuckles, whilst I precariously balanced the camera with my right hand. It wasn’t the easiest of shots to get, believe me! 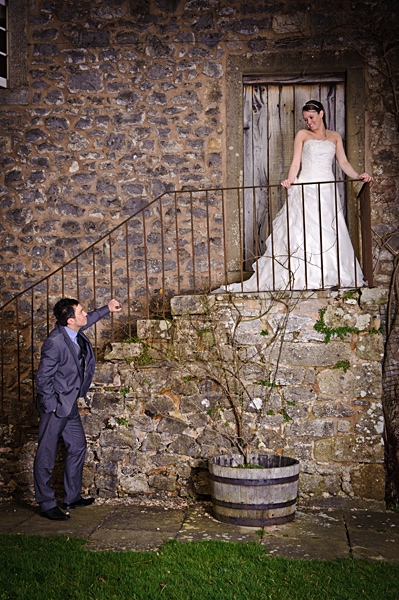 I saw these steps on our way back from the river, and it just seemed to shout “Romeo and Juliet!. I couldn’t help myself  🙂

Safari at a little under 1/2 power, firing through the 120cm octobox and triggered via Yongnuo RF602

The Inn at Whitewell is a hugely romantic venue, and ideal for weddings. One of the things that strikes me whenever I work there, is the fact their wedding co-ordinator does exactly that! Unlike most hotels where the wedding co-ordinator is a thinly disguised tour guide who shows you around the place when you first go to view the venue, and then you have little to do with them, even on the day of the wedding. At the Inn however, Sharon and Jo really do oversee the whole day, and ensure it runs smoothly.

Quite a rare quality nowadays.

Sharon may be contacted here.